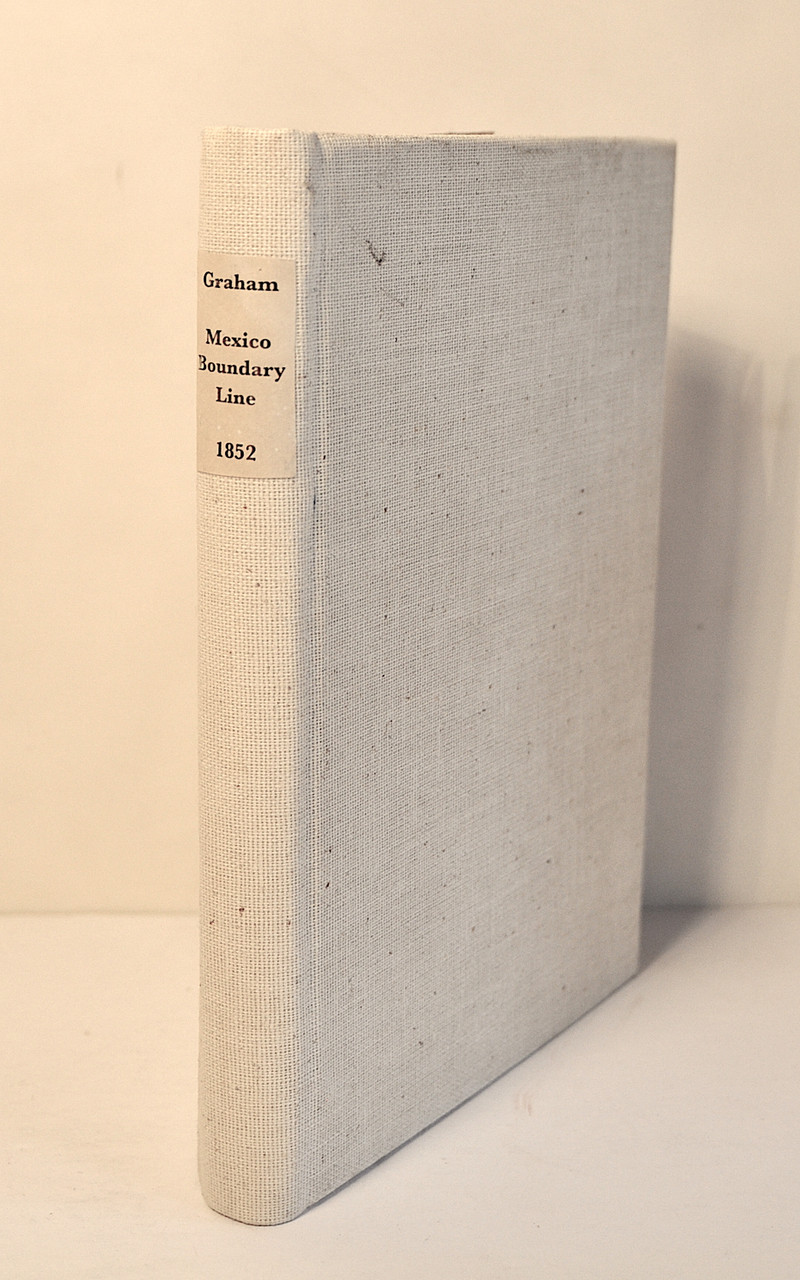 Product Description
Graham, James D.; Report of the Secretary of War, Communicating, the Report of Lieutenant Colonel Graham on the Subject of the Boundary Line between the United States and Mexico. Washington, 32nd, Congress, Senate Exec. Doc. 121, 1852. Octavo, pp. 250, 2 folding maps, 1 folding profile. These are:  lithographed barometric profile from San Antonio to Santa Rita, New Mexico, in 1851, and 2 large folding lithographed maps: "Mexican Boundary. Sketch A. Referred to in Colonel Graham's Report", "Mexican Boundary B. From the Treaty Map of Disturnell of 1847".
The work is complete and in a modern cream colored cloth with gilt spine titles. The binding is tight and clean, the text and folded maps and profile are very clean. In very good condition.
Graham (1799-1865) was born in Virginia. He attended the U. S. Military Academy (1813-1817) and worked for two years as an adjunct at West Point until 1819.
Graham then participated in the Long Expedition to explore and survey areas acquired in the Louisiana Purchase. He then participated in other surveys including in Vermont and several railroad surveys in the east as well as surveys and planning for new military installations in the midwest. In 1849-1850 he participated in the survey for the Mason-Dixon line.
Following the settlement of the Mexican War, Graham headed the Scientific Corps survey for the demarcation of the boundary between the United States and Mexico under the Treaty of Guadalupe Hildago.  In the course of the survey, Arizona's Mount Graham was named for him. One major boundary dispute did occur. The dispute was over the point at which the eastern New Mexico border would touch the Rio Grande had led to a series of concessions by the civilian U.S. commissioners in charge of the survey. Graham believed the concessions were inconsistent with the intent of the Treaty of Guadalupe Hidalgo and the interests of the United States, because they jeopardized the only practicable southern route for a transcontinental railroad. Graham refused to allow his detachment of topographical engineers to survey the border until his interpretation of the border's beginning point was negotiated. Because of this dispute, Graham was replaced as chief astronomer and head of the scientific corps. Ultimately, Graham's position was vindicated by the Gadsden Purchase in 1853.