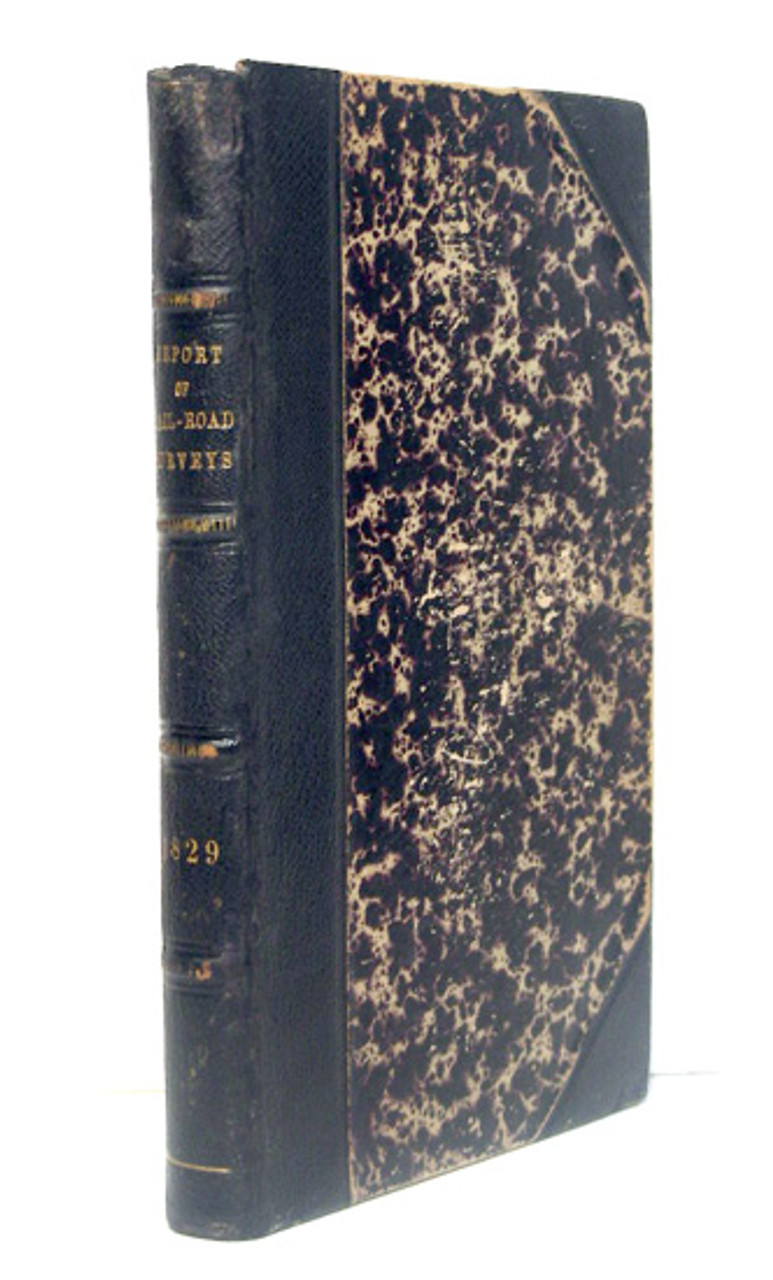 Baldwin, James Fowle & Hayward, James & Willard, Solomon; Report of the Board of Directors of Internal Improvements of the State of Massachusetts on the Practicability and Expediency of a Rail-Road from Boston to the Hudson River, and from Boston to Providence. Submitted to the General Court, January 16, 1829. To Which Are Annexed, the Reports of the Engineers, Containing the Results of Their Surveys, an Estimates of the Cost of Constructing a Rail-Road, on Each of the Routes Selected. With Plans and Profiles of the Routes. Boston: Press of the Boston Daily Advertiser, W. L. Lewis, Printer, Congress-street, 1829. Octavo, pp. 76, 119 plus six engraved, folding maps and profiles.

The report is complete and in a contemporary half calf with gilt titles. The binding is tight and clean, text and folded plates have light foxing, early ownership signatures on paste down and title page. Over all in very good condition.

This is a compilation of seminal reports advocating and describing the earliest general-purpose rail lines in New England. Particularly interesting for the inclusion of a two-part map of the proposed line from Boston to Albany, which is the first rail map printed in the United States.
After an overview by members of the board of directors the following early reports are provided” Report of Mr. Baldwin on the rail-road surveys from Boston to the Hudson river. Report of Mr. Hayward on the rail-road surveys between Boston and Providence. Report of Mr. Solomon on the cost of stone for the railroads.?The report provides a look at one of the revolutions in transportation (the railroads) which were probably the greatest drivers of economic growth in the early years of the American Republic. The introduction of canals in the 1790s and then railroads in the 1820s sharply reduced the cost and time of transportation within America.

James Fowle Baldwin (April 29, 1782 – May 20, 1862) was an American civil engineer who worked with his father and brothers on the Middlesex Canal, surveyed and designed the Boston and Lowell Railroad and the Boston and Albany Railroad and the first Boston water supply as well as many other early engineering projects. He was the first president of the Boston Society of Civil Engineers.
James Hayward (1786-1866) an American surveyor and civil engineer, published an early geometry text in 1829 and produced some of the earliest maps of canal routes, roads and railroads in America.
Willard S. Solomon (1783-1861) American self-made architect and engineer who designed the Bunker Hill Monument and also helped pioneer the use of granite and marble in the construction of railroad structures and buildings.