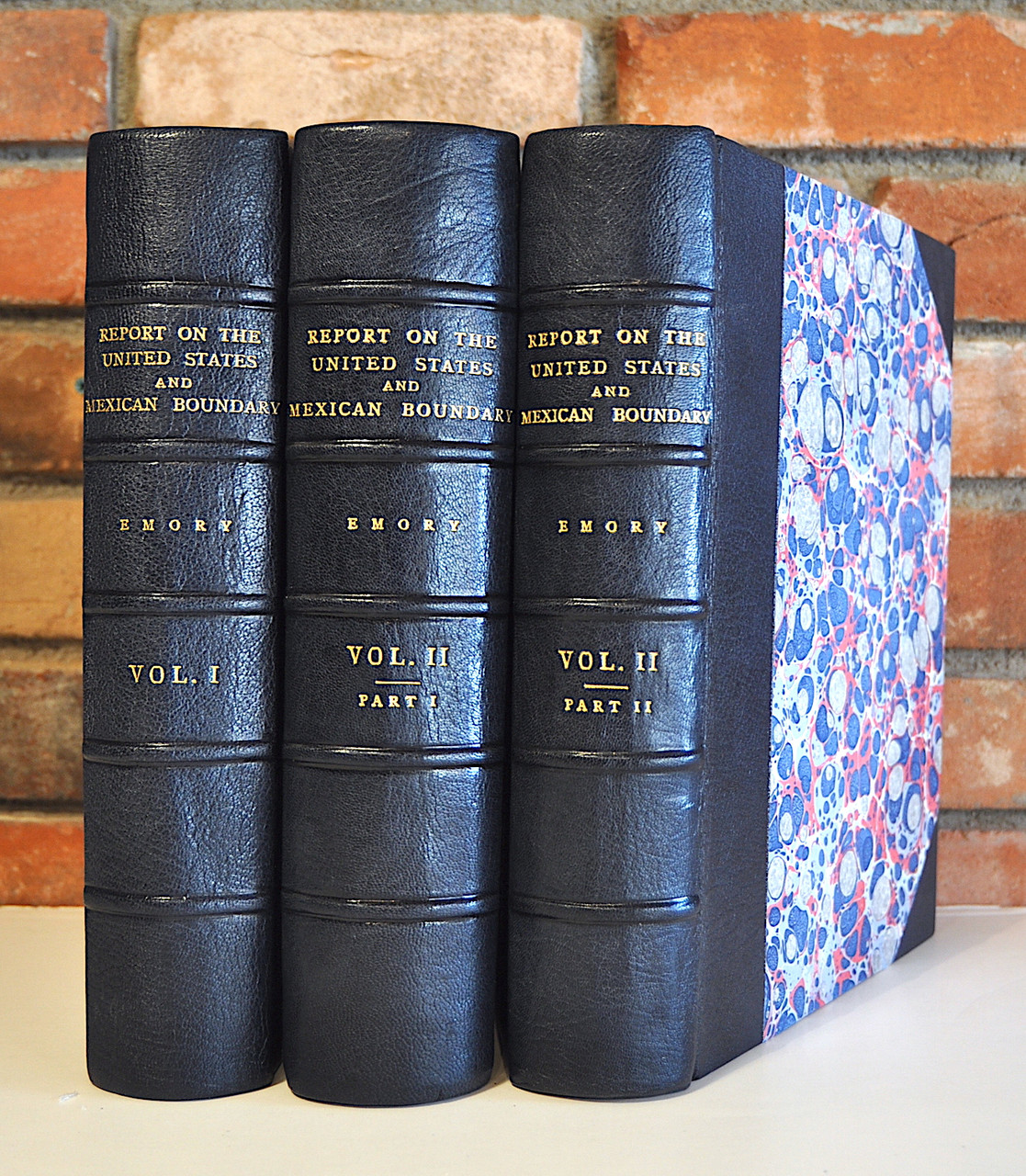 Product Description
Emory, William H., et.al.; Report on the United States and Mexican Boundary Survey, made under the Direction of the Secretary of the Interior. Senate Exec. Doc. 108 and House of Representatives Ex. Doc. No. 135, 34th Congress, 1st Session. Washington, 1857-1859. 2 volumes bound in 3, as issued. Quarto, Volume I, parts I and II: pp. xvi, 258 with frontispiece, 64 outline sketches and maps, 1 large folding map and illustrations engraved on steel, map and meteorological engraved on copper diagram, 12 engravings on stone, 20 wood cuts and errata; vii, 174,  21 paleontology plates with folding Hall’s folded geological map in color, 25 other maps and illustrations and errata. Volume 2, part I:  pp. 270, frontispiece, 75 plates, pages with index; pp. 74, 61 plates. Volume II, part II: pp. 62, 27 plates, pages with index, pp. 33, 25 plates with index, pp. 35, 41 plates with index, pp. 85, [ii], 41 plates] with index. Summarizing plates, maps and profiles: Large folding lithographed map of the "United States and their Territories between the Mississippi and the Pacific Ocean and part of Mexico", the rare often missing, large lithographed folding "Map Illustrating the General Geological features of the Country West of the Mississippi River" with printed color, by James Hall, J.P. Lesley after Emory, 9 steel-engraved plates of geology and views,12 tinted lithographs views and portraits of Indians, 33 engraved plates with 66 images, one long folding lithographed plate of profiles near the 32nd parallel, one long folding lithographed barometric chart, one full-page map showing California, New Mexico, Texas, and Mexico, 21 steel-engraved paleontological plates, 61 lithographed botanical plates, 75 steel-engraved plates of specimens, and one view of cacti, 27 steel-engraved plates of animals observed on the boundary, many showing details of their bone structure, 25 lithographed plates of birds with original hand-colour, 41 steel-engraved plates of reptiles, 41 steel-engraved plates of fish, and numerous wood-engraved illustrations in text.
The set is complete and in a 20th century deep blue calf with marbled boards with spine panels and gilt spines. The bindings are exceptionally clean. The text, maps, plates and profiles are clean with some minor toning and foxing to some plates. Over all in very good condition.
Emory (1811-1887) was a graduate of West Point in 1831. He served in the Fourth Artillery until he resigned from the service in 1836  but re-enlisted in 1837 in the newly formed Corps of Topographical Engineers. He was to devote the rest of his life to that service. As an officer in the U. S. Army Corps of Topographical Engineers he specialized in mapping the southern United States border, including the Texas–Mexico border, and the Gadsden Purchase border, 1844–1855, and published important scientific reports on the border region. The Mexican Boundary Survey was by far his most important publication. The Mexican Boundary Survey was the most comprehensive scientific investigation ever conducted on the 1,969 mile border between Mexico and the United States. The U.S. government commissioned the survey in order to map and mark the new boundary that resulted from the 1848 Treaty of Guadalupe Hidalgo. The survey was tasked with studying the geology and noting the mineral resources of the region and the government also commissioned several naturalists to gather plant and animal specimens in order to understand the natural resources of the area.  The Mexican Boundary Survey provided a more extensive listing of plant species along the United States-Mexican border than had ever been created before, and was an important contribution to botanical knowledge. The results of this survey remain one of the foremost publications on exploration of the southwestern United States. The first volume of Emory's report was published 1857, but Congress disapproved of the project's high production costs. Consequently, fewer than one third as many copies of the subsequent volumes were printed, making complete sets of this work particularly rare.