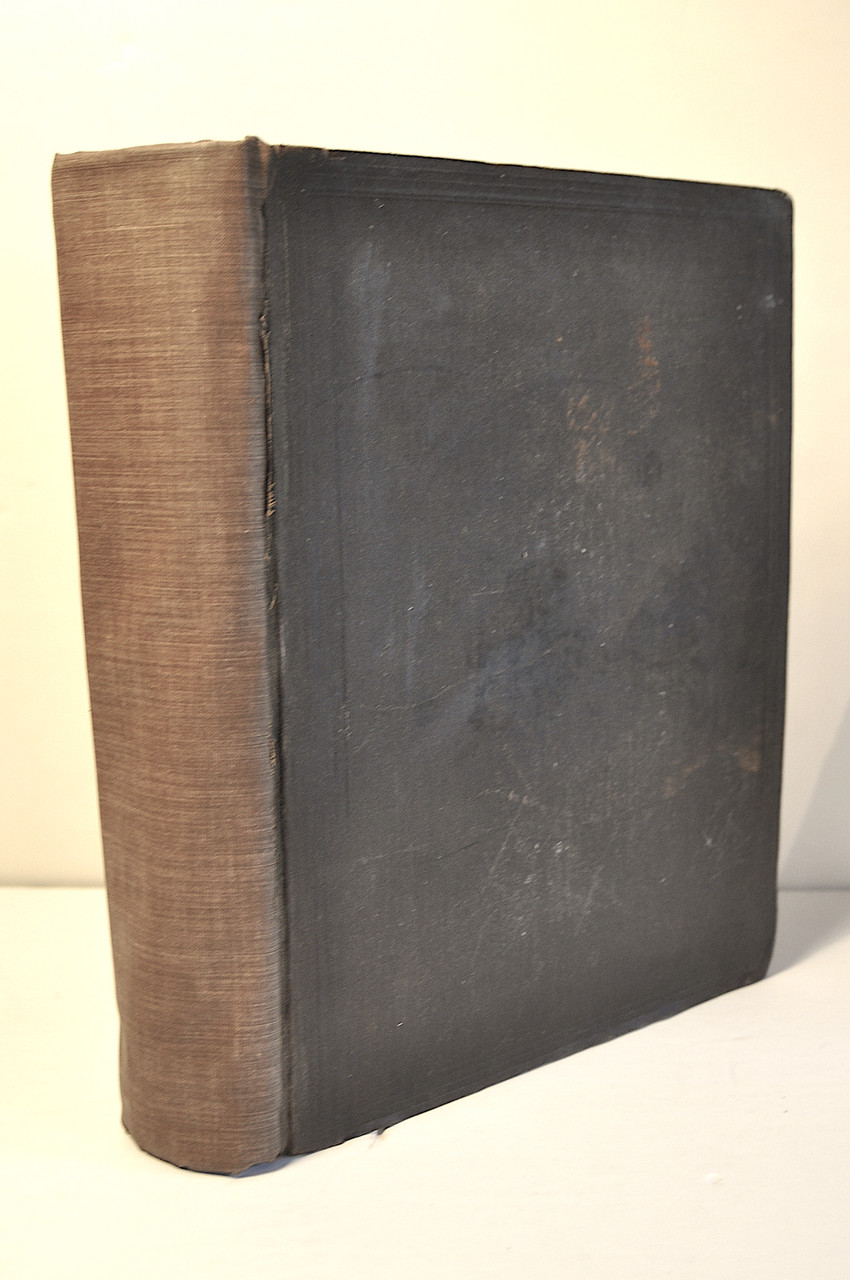 Patterson, Carlile P., et.al.; Report of the Superintendent of the Coast and Geodetic Survey, Showing the Progress of the Survey During the Fiscal Year Ending with June 1880. Washington, Government Printing Office, 1882.  Quarto, pp. xxii, 419, 84, plates, charts, maps and profiles (most folded).

The volume is complete and bound in the original brown cloth with a later light brown cloth spine and later brown end sheets. The binding is tight with wear and scuffing to the original boards. The text is clean and free of foxing, wear and tears to outer border of the title page repaired. Maps are bright with wear to some folds at outer fold edge. All maps are present. From the personal library of Ernst West with his penned name on end sheet. West owned many of the marble mines in the Dorset, VT region. Over all in good condition.
The United States Survey of the Coast was established by President Thomas Jefferson in 1807 and held this title until 1836. In 1836 it became the United States Coast Survey until 1878 and then the United States Coast and Geodetic Survey until 1970 when it  became an office within NOAA.  Its original mission was to survey and map the entire coast line to insure the coasts and harbors safe for shipping. As the United States expanded the survey expanded and its mission grew but the primary goal remained the mapping and charting of the coast.
The original reports were prepared by Ferdinand Hassler as first Superintendent of the Coast Survey, The first Report in 1837 is titled Report From the Secretary of the Treasury and was very brief. From 1844 to 1865 Alexander Dallas Bache the great- great Grandson of Benjamin Franklin) was the second Superintendent of the Coast Survey and wrote the reports which after 1844 became far more expansive with maps and charts. Those reports cover only the Coast Survey and are titled Report of the Superintendent of the United States Coast Survey Showing the Progress of the Work. Bache reorganized the Coast Survey and expanded its work southward along the United States East Coast into the Florida Keys, and later along the Gulf Coast and by 1849 with the California gold rush mapping and surveys were being conducted along the United States west coast. Bache also added more scientific research to the surveys including physical oceanography, geological oceanography, biological oceanography and chemical oceanography. The Coast Survey became a model for all future oceanographic cruises and research. In addition to conducting hydrographic surveys and producing nautical charts, U.S. Coast Survey conducted the first systematic study of the Gulf Stream, designed tidal predication machines, and established the geodetic connection between the Atlantic and Pacific coasts and in 1878 became known as the Coast and Geodetic Survey and the name of the report was changed to Report of the Superintendent of the U.S. Coast and Geodetic Survey Showing the Progress of Work. The Survey was attracting the best and brightest scientists and naturalists including the famed naturalist Louis Agassiz to conduct the first scientific study of the Florida reef system. James McNeill Whistler, who went on to paint the iconic “Whistler’s Mother,” was a Coast Survey engraver. The great naturalist John Muir was a guide and artist on “Survey of the 39th Parallel” across the Great Basin of Nevada and Utah.
These reports are an excellent source of information on the development of science in America and the mapping of the coastal areas throughout the country. The reports also serve as guides for additional information on the history of our country and reference other repositories throughout the United States and above all the reports capture much of the evolution of the philosophy of science and engineering in America and serve as a guide to understanding the evolution of the politics of science and the generation of science policies that effect the citizens of the United States to this day.
The 1880 report contains surveys and studies extending from Frenchman’s Bay in Maine, studies of Lake Champlain in Vermont, south along the New England coast and New York, New Jersey, and Delaware coastlines, the Maryland, Virginia, North Carolina and coast lines south along Florida to the Gulf Coast. Studies extend northward along parts of the Mississippi River and west along the Texas coast. Surveys and studies also extend along the west coast of the United States from California through Oregon and Washington and include preliminary studies along the coast of Alaska. Interior studies within the United States have triangulation surveys in Missouri, Kentucky, Wisconsin, Colorado, Nevada and other areas. All of these surveys are supplemented with maps.