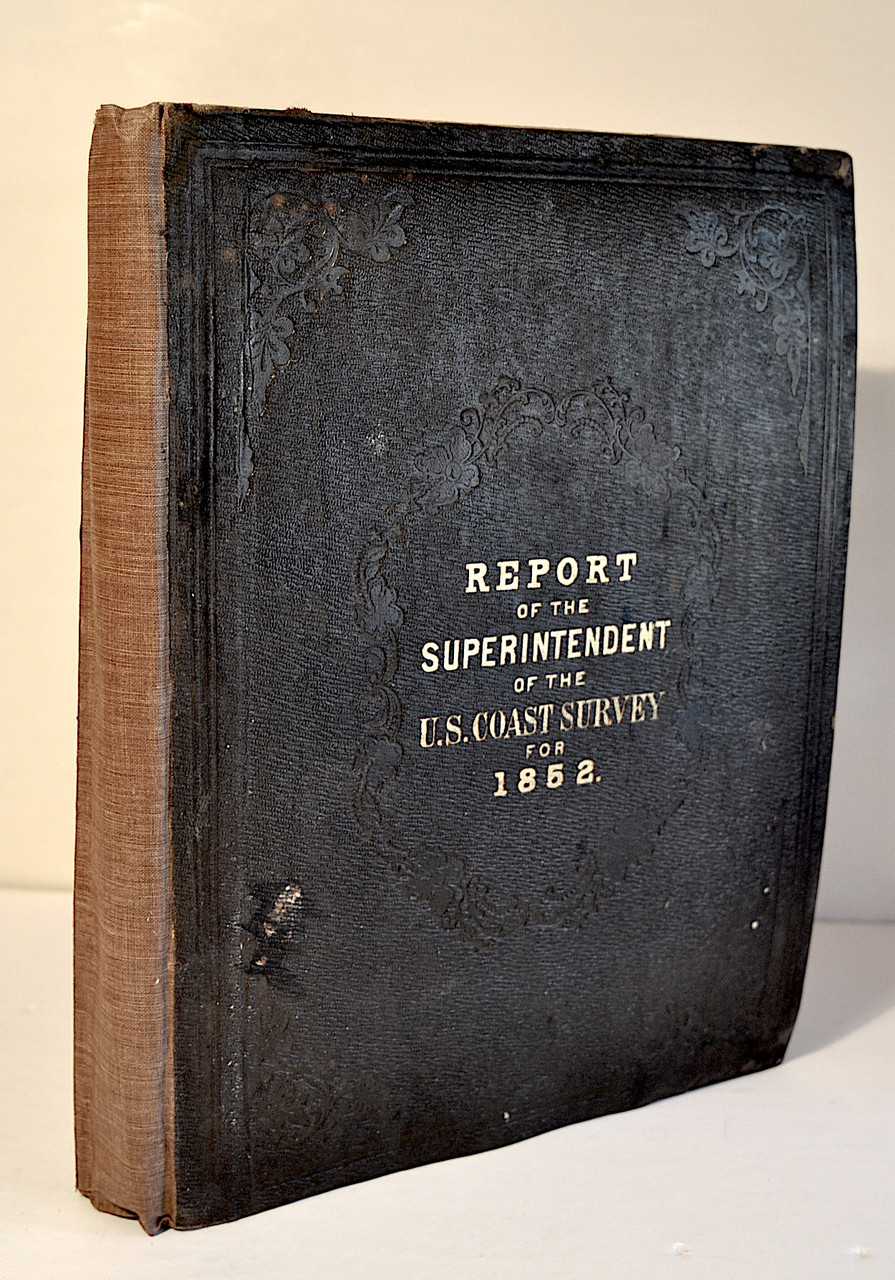 Bache, Alexander D., et.al.; Report of the Superintendent of the Coast Survey, Showing the Progress of the Survey During the Year 1852. Published by Robert Armstrong, Public Printer, Washington DC, 1853.  Quarto, pp. vi, errata, 173, 3, 37 folded leaves of plates and maps.

The volume is complete and bound in the original embossed dark brown cloth with ruled borders and gilt cover titles with a later light brown cloth spine and later brown end sheets. The binding is tight and clean, bumping to corners and edges. The text is clean and free of foxing, very light tide mark to outer margin of first and last leaves. Maps are bright, light tide mark on inner fold of a few maps, light wear to some folds at outer fold edge. Usually the maps in these reports are in poor condition with important ones missing. Over all a very good copy of an early report.
The United States Survey of the Coast was established by President Thomas Jefferson in 1807 and held this title until 1836. In 1836 it became the United States Coast Survey until 1878 and then the United States Coast and Geodetic Survey until 1970 when it  became an office within NOAA.  Its original mission was to survey and map the entire coast line to insure the coasts and harbors safe for shipping. As the United States expanded the survey expanded and its mission grew but the primary goal remained the mapping and charting of the coast.
The original reports were prepared by Ferdinand Hassler as first Superintendent of the Coast Survey, The first Report in 1837 is titled Report From the Secretary of the Treasury and these early reports were very brief.
From 1844 to 1865 Alexander Dallas Bache was the second Superintendent of the Coast Survey and wrote the reports which after 1844 became far more expansive with maps and charts. Those reports cover the mapping, charts and scientific work of the Coast Survey and are titled Report of the Superintendent of the United States Coast Survey Showing the Progress of the Work. Bache reorganized the Coast Survey and expanded its work southward along the east coast of the United States into the Florida Keys and later along the Gulf Coast and by 1849 with the California gold rush mapping and surveys were being conducted along the United States west coast. Bache also added more scientific research to the surveys including physical oceanography, geological oceanography, biological oceanography and chemical oceanography. The Coast Survey became a model for all future oceanographic cruises and research.
The report offered here contains Bache's studies and surveys of the US coast extending from Davis South shoal off Nantucket, Massachusetts, down to the Gulf along the Florida coast and west to Galveston Bay and then provides details of surveys along the California coast including San Francisco. Within the plans and charts "The City of San Francisco and its Vicinity" plan extends from Point San Quentin up to Tonquin Shoal, and shows all the wharfs and street grid laid out. The charts also include San Clemente Harbor and Cuyler's Harbor map with two engraved views of the harbors by William Birch McMurtrie (1816 - 1872) and 17 additional McMurtrie engraved views at 'Western coast from San Francisco to San Diego’. The maps and charts include numerous other locations including: Davis' South shoal, Chincoteague Inlet, Seacoast of Delaware, Maryland, and part of Virginia, Cape Fear, Ocracoke Inlet, New River, Hatteras Inlet, Savannah River, North and South Edisto and Saint Helena Sound, Cedar Keys, Bahia Honda, Key Biscayne, Key West and Dry Tortugas, Key West Harbor, St. Marks, Mobile Bay, Horn Island Pass, Cat Island tides, Galveston Bay, San Francisco Bay and Vicinity, Monterey Harbor, Catalina Harbor, San Pedro Harbor, City of San Francisco and Vicinity, Cuyler's Harbor, Harbors of Santa Cruz, San Simeon, Coxo and San Luis Obispo, Western coast from San Francisco to San Diego, and Columbia River. The map "Reconnaissance of the Bar and Channel of St. Marks" appears twice, both at its intended location and again at "Reconnaissance of the Passes of the Delta of the Mississippi”. This is evidently a printer's error since the mistake appears in all copies of the report.