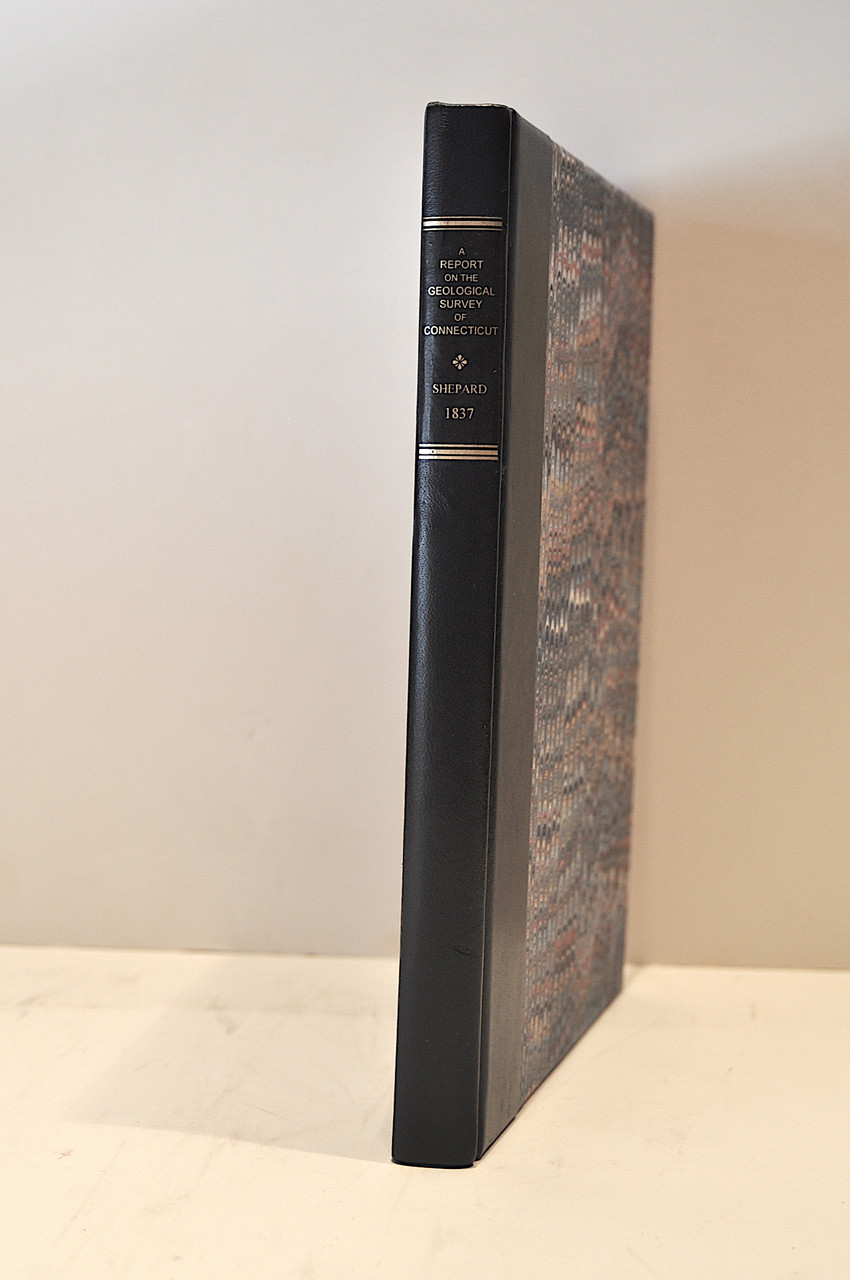 Product Description
Shepard, Charles U.;  A Report on the Geological Survey of Connecticut. Published under the direction of his excellency, Henry W. Edwards, Governor of the State. New Haven, 1837. Octavo, pp. 188 with text illustrations.
The work is complete and in the original title wraps and housed in a modern calf over marbled boards clam shell box with gilt spine titles. The clam shell box is pristine. The work was originally in the collections of the Franklin Institute with their small blind stamp and then transferred to Yale College with their penned notation on the cover. In very good condition.
Charles Upham Shepard (1804-1886) was an American geologist and mineralogist. Shephard studied at Brown and was an 1824 graduate of Amherst College. He developed an interest in geology and mineralogy at an early age and by age fifteen had built an extensive collection of both minerals and meteorites. His collections accompanied him to both Brown and Amherst. At Amherst he became a student of Amos Eaton (1776-1842) who urged him to continue collecting minerals and thus Shepard travelled extensively mineral localities throughout the country. His collecting made it possible for him to exchange minerals for specimens from European collections. Shepard was mentored by Thomas Nuttall, Benjamin Silliman, Sr., and others and held faculty positions at Amherst, Yale, and the Medical College of South Carolina. An avid collector, Shepard assembled an extensive collection of minerals and meteorites, which at one time was unsurpassed in America. Part of his collection was destroyed in a fire at Amherst in 1881 and the remaining part of the collection is still preserved at Amherst College.
Shepard's report on the geology of Connecticut was the first State-sponsored geological survey of Connecticut, and focused on the State's economic mineral resources and mineralogy. The volume is divided into three parts. Part 1 is the "Economical Report", describing resources of useful or commercial value: metals, gemstones, building materials, agricultural materials, etc. Part 2 is the "Scientific Report", which documents the minerals found in Connecticut, providing important locality data; and Part 3 is a "Descriptive Catalogue", consisting of more than 600 specimens of rocks and minerals that illustrate the geology and mineralogy of the State, with localities.