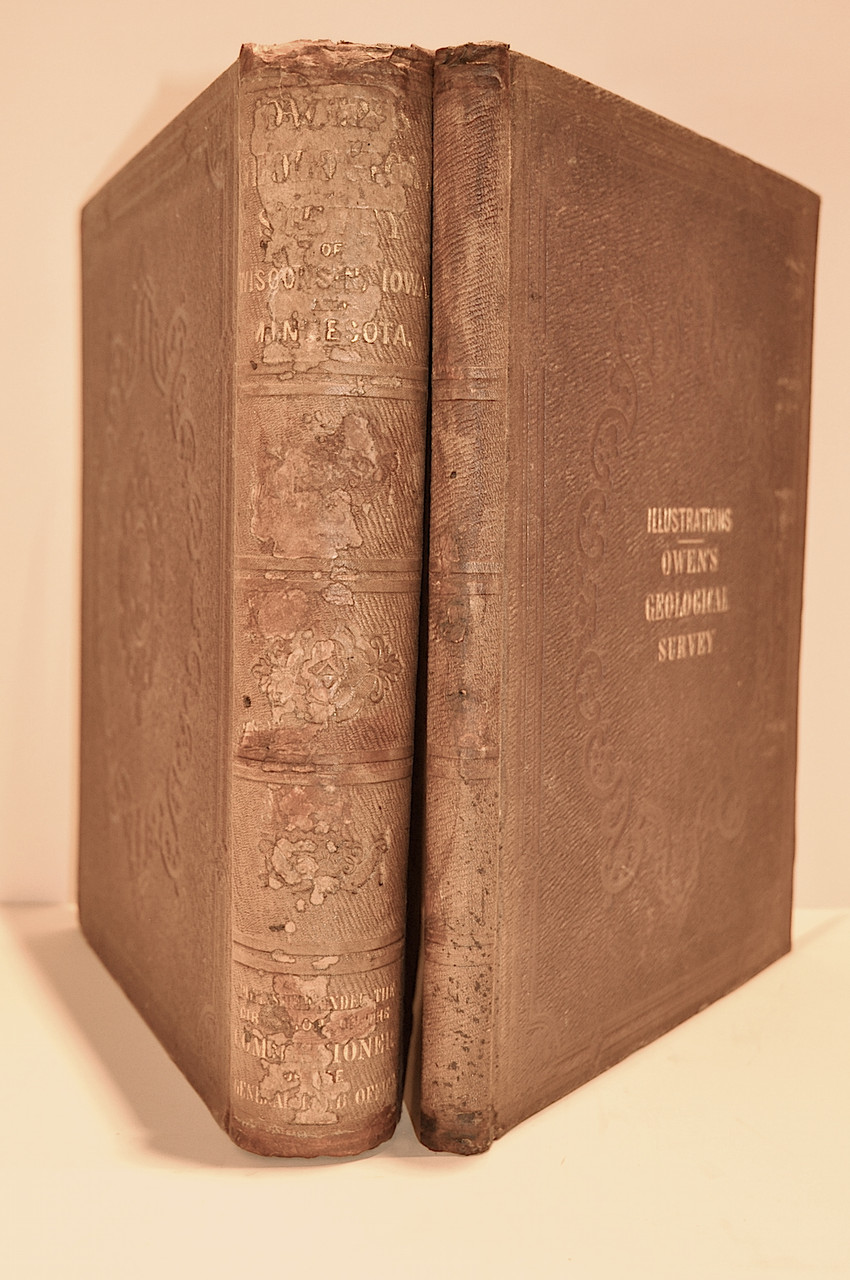 Product Description
Owen, David Dale; Report of a Geological Survey of Wisconsin, Iowa, and Minnesota; and Incidentally of a Portion of Nebraska Territory. [With:] The Illustrations to the Geological Report of Wisconsin, Iowa, and Minnesota. Lippincott, Grambo & Co, Philadelphia, 1852. Large quarto, 2 vols. text and atlas. Text, pp.  xxxviii, ii, 41-638, 2, with 71 wood-engraved plates and vignettes Atlas, 27 engraved and gravure fossil and geological plates, 20 lithographed maps, plans, and elevations (most folding and partially handcolored), large folding engraved hand colored geological map.
Both parts are complete and in the original ornately stamped cloth with gilt spine titles on the text and gilt cover titles on the atlas. The bindings are tight and titles are bright. Light wear to covers, corners bumped, light scuffing and spotting to the spine of the text. The text, maps, sections and plates are all clean. Faint contemporary pencilled owners signature to first blank leaf of text and atlas. A very good set.
David Dale Owen (1807 – 1860) was a prominent American geologist who conducted the first geological surveys of Indiana, Kentucky, Arkansas, Wisconsin, Iowa and Minnesota. Owen served as the first state geologist for three states: Kentucky (1854–57), Arkansas (1857–59), and Indiana (1837–39 and 1859–60). His first geological work was as an assistant mapping the geology of Tennessee in 1836. In addition, Owen was appointed as a U.S. geologist in 1839 and led federal surveys of Iowa, Wisconsin, and northern Illinois (1839–40) and in the Upper Midwest (1847-1851). Owen's greatest legacy lies in the eleven volumes of published reports from his state and federal geological surveys, which increased the general knowledge and understanding of American geology, the structural geology and paleontology of the United States, and the mineral wealth of the Midwestern states. Owen's most significant contribution to the field of geology was identifying and naming major geological formations of the Mississippi River Valley and placing them in relative position on a geological timeline. He also helped to standardize the nomenclature of geological structures in the Midwest. In addition to his work in the field, Owen established a geological laboratory and museum at New Harmony. The laboratory served as the headquarters of the U.S. Geological Survey until 1856, when the federal survey's headquarters were relocated to the newly completed Smithsonian Institution Building in Washington, D.C. The surveys of Wisconsin, Iowa, and Minnesota, as well as the subsequent publication of the two volume report, was Owen's major achievement and the high point of his career. Owen provides a detailed description of the stratigraphy, structure and paleontology of the regions surveyed as well as details on the mineral deposits. The plates and maps are quite beautiful. In addition to Owen’s description of the geology and strata the report contains J. G. Norwood’s report on middle and western Minnesota, Whittlesey’s report on parts of Wisconsin, Shumard’s report on geological sections on the St. Peters, Mississippi, Wisconsin, Barraboo, Snake, and Kettle Rivers and Joseph Leidy’s report on vertebrate fossils.