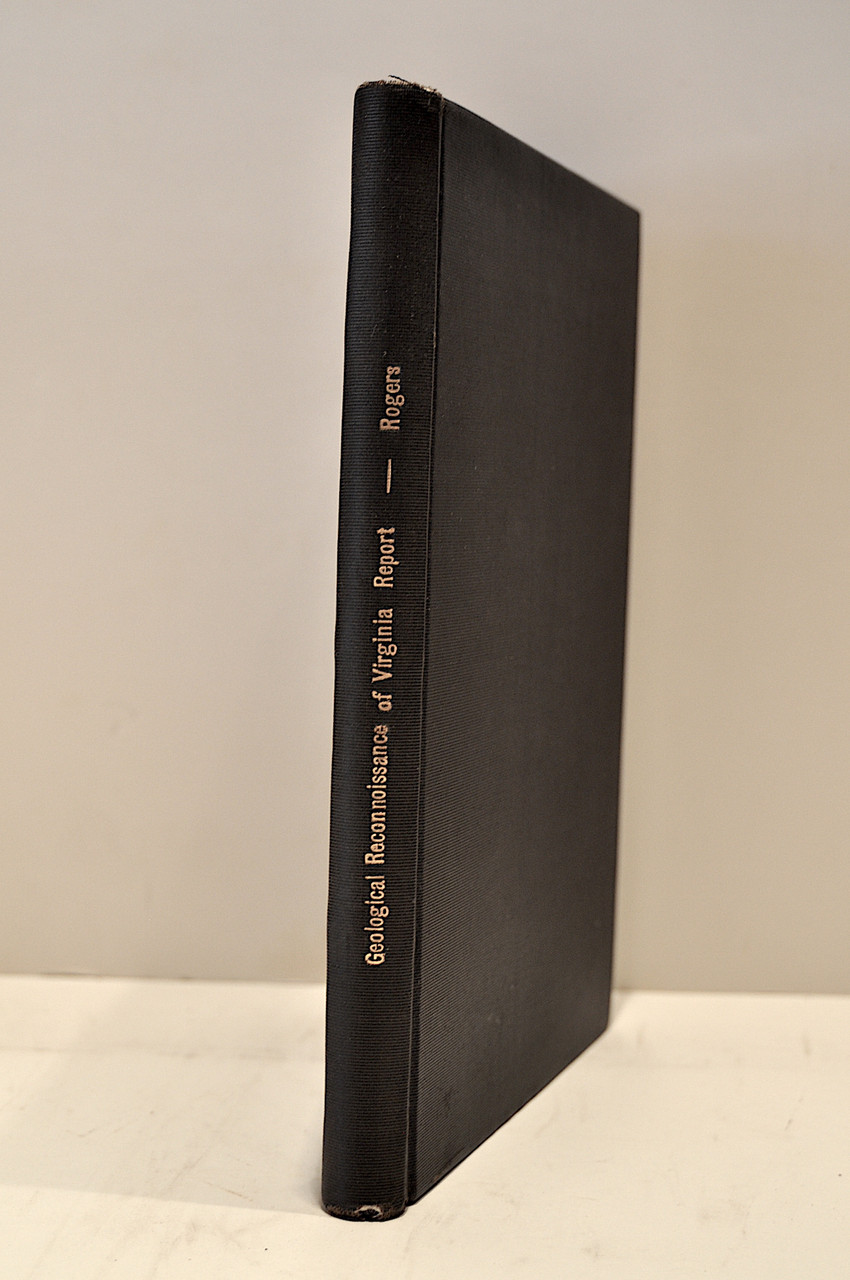 Product Description
Rogers, William Barton; Report of the Geological Reconnoissance of the State of Virginia. Philadelphia, Desilver, Thomas & Co., 1836. Large octavo, pp. 143, errata, folded hand colored plate of eight geological profiles.
In a later cloth  binding with gilt spine titles, original blue title wraps bound in. The binding is tight and clean, titles bright. The text and folded map are exceptionally clean and bright. Cancelled book plate of the AMNH on paste down and small embossed AMNH stamp on title page. Minor edge tear to map nicely repaired with archival tape. In very good condition.
William Barton Rogers (1804 – 1882) was an American geologist, physicist, and educator at the University of Virginia from 1835 to 1853. In 1861, William B. Rogers  with his brother Henry D. Rogers founded the Massachusetts Institute of Technology (MIT). The university opened in 1865 after the American Civil War. Because of his affiliation with Virginia, Mount Rogers, the highest peak in the state, is named after him.. Both William and Henry would become prominent geologists. In 1833, his brother Henry had returned from England filled with enthusiasm for geology, and this had prompted William B. Rogers to begin studies in the field. The practical value of a scientific article he published on greensand and found in his  first report for the Geological Survey of New Jersey intrigued the Virginia state legislature. The Legislature correctly recognized the use of greensand as a fertilizer. Rogers took this opportunity to lobby for a geological surveyof Virginia, and he was called upon to organize and head the survey in 1835. By 1835, his brother Henry was state geologist of Pennsylvania, and together the brothers unfolded the historical geology of the Appalachian chain. Among their joint special investigations were the study of the solvent action of water on various minerals and rocks, and the demonstration that "coal beds stand in close genetic relation to the amount of disturbance to which the strata around it have been submitted, the coal becoming harder and containing less volatile matter as the evidence of the disturbance increases. In modern terms, this was the realization that the geological process of metamorphism had gradually transformed softer grades of coal, such as lignite, into harder grades, such as anthracite. Together, the brothers also published a paper on "The Laws of Structure of the more Disturbed Zones of the Earth's Crust", in which the wave theory of mountain chains was first announced. This was followed later by William Rogers' statement of the law of distribution of geological faults. These pioneering works contributed to a better understanding of the vast coal beds underlying some parts of the Appalachian region, and helped pave the way for the Industrial Revolution in the United States.
State revenues inVirginia had shrunk beginning in 1837, and the funding for the new geological survey had been drastically reduced. By this time William B. Rogers had produced six "Reports of the Geological Survey of the State of Virginia" (Richmond, 1836–40). However very few copies of the reports were printed due to a lack of funds. Original copies of these reports are very rare. The 1836 report offered here is the first report. In this report Rogers provides a comprehensive survey of the stratigraphy, structure, and mineral resources across Virginia.

Hopkins, William; On the Geological Structure of the Wealden District and of the Bas Boulonnais. 1845