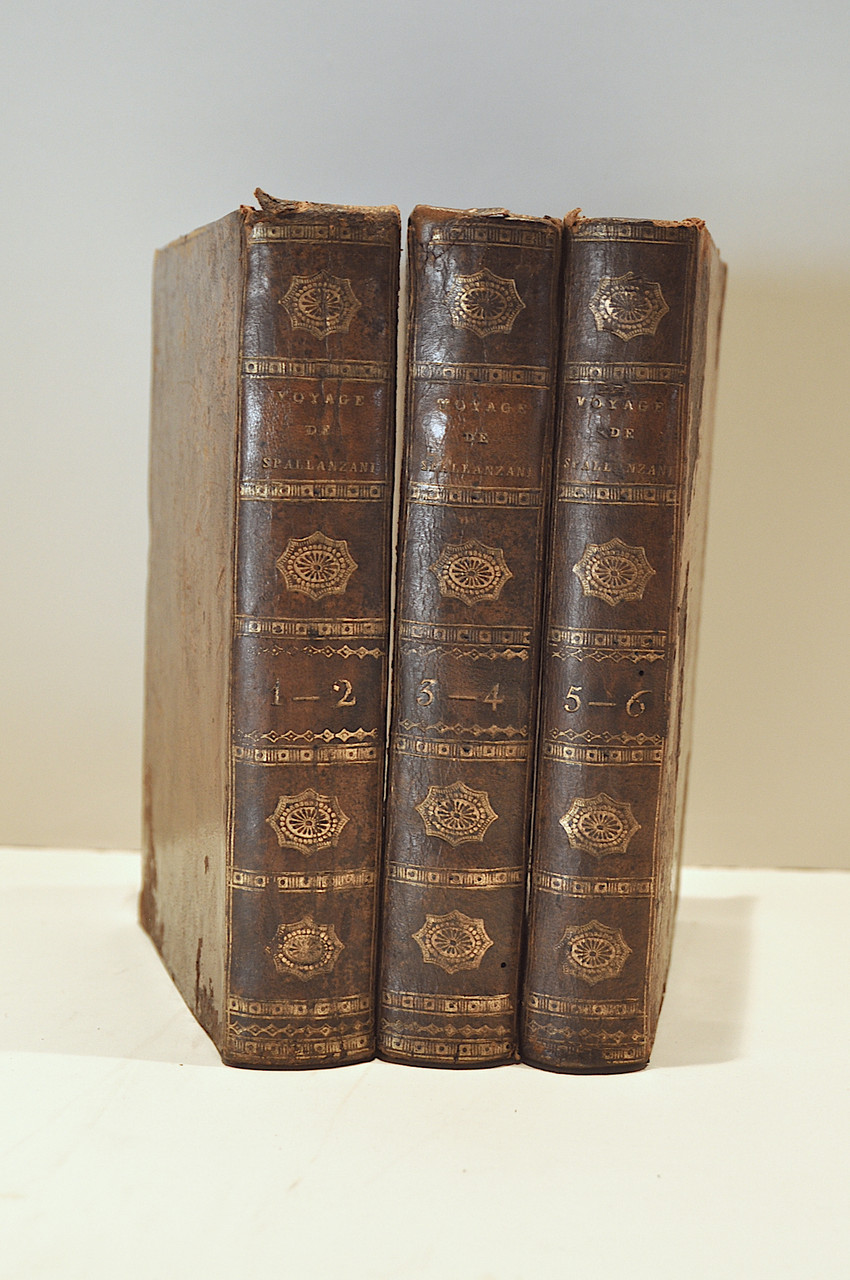 Product Description
Spallanzani, Lazzaro;  Voyages Dans Les Deux Siciles Et Dans Quelques Parties Des Apennins, Par Spallanzani, Professeur d'Histoire naturelle dans l'université de Pavie. Traduits e l'Italien par G. Toscan, Bibliothécaire du Museum national d'Histoire naturelle de Paris, avec des Notes du cit. Faujas-de-St.-Fond... A Paris, Chez Maradan, Libraire, rue Pavée-André-des-Arcs, n°. 16. An VIII. 1799.  Large octavo, six parts in three volumes. Part 1. pp. half title, title, viii, 2, 311, 2 folded plates. Part 2, pp. half title, title, 280, 3 folded plates. Part 3, pp. half title, title, 291. Part 4 pp. half title, title,272, 2 folded plates. Part 5, pp. half title, title, 309. Part 6, pp. half title, title, 215.
Large octavo, Six parts bound in three volumes, complete. The set is in a contemporary full calf with gilt spine titles and panels. The bindings are tight, wear to boards and scuffing. Text and plates are bright with a minor damp stain to outer margin of last part of part six, light foxing to outer margin of titles. Over all in very good condition
Lazzaro Spallanzani (1729 –1799) was an Italian naturalistt, biologist and physiologist who made important contributions to the experimental study of bodily functions, animal reproduction, as well as to geology and volcanology. In 1754, at the age of 25, he became professor of logic, metaphysics snd Greek in the University of Reggio. In 1762 he was ordained as a priest, and in 1763 moved to Modena. He became the Chair of the Natural History Department at the University of Pavia in 1769.  Spallanzani also became director of the museum at the University of Pavia, where he greatly expanded the collections with specimens collected during his many travels in the Mediterranean region. In June 1768 Spallanzani was elected a Fellow of the Royal Society, and in 1775 was elected a foreign member of the Royal Swedish Academy of Sciences. In the six volumes of the Voyages dans les Deux Siciles, Lazzaro Spallanzani offers a major contribution to the  development of the science of volcanology. His surveys were carried out on active volcanos of southern Italy (in particular in the Aeolian Islands and on Mt. Etna and Vesuvius).In addition to contributing to the development of the theory of volcanism, he interprets the process of formation of pumice. He describes the processes of volcanism, the associated seismic activity, and the mineralogy and rocks associated with the volcanoes and was the first to apply experimental methods to describe the formation of pumice and other rocks and minerals.