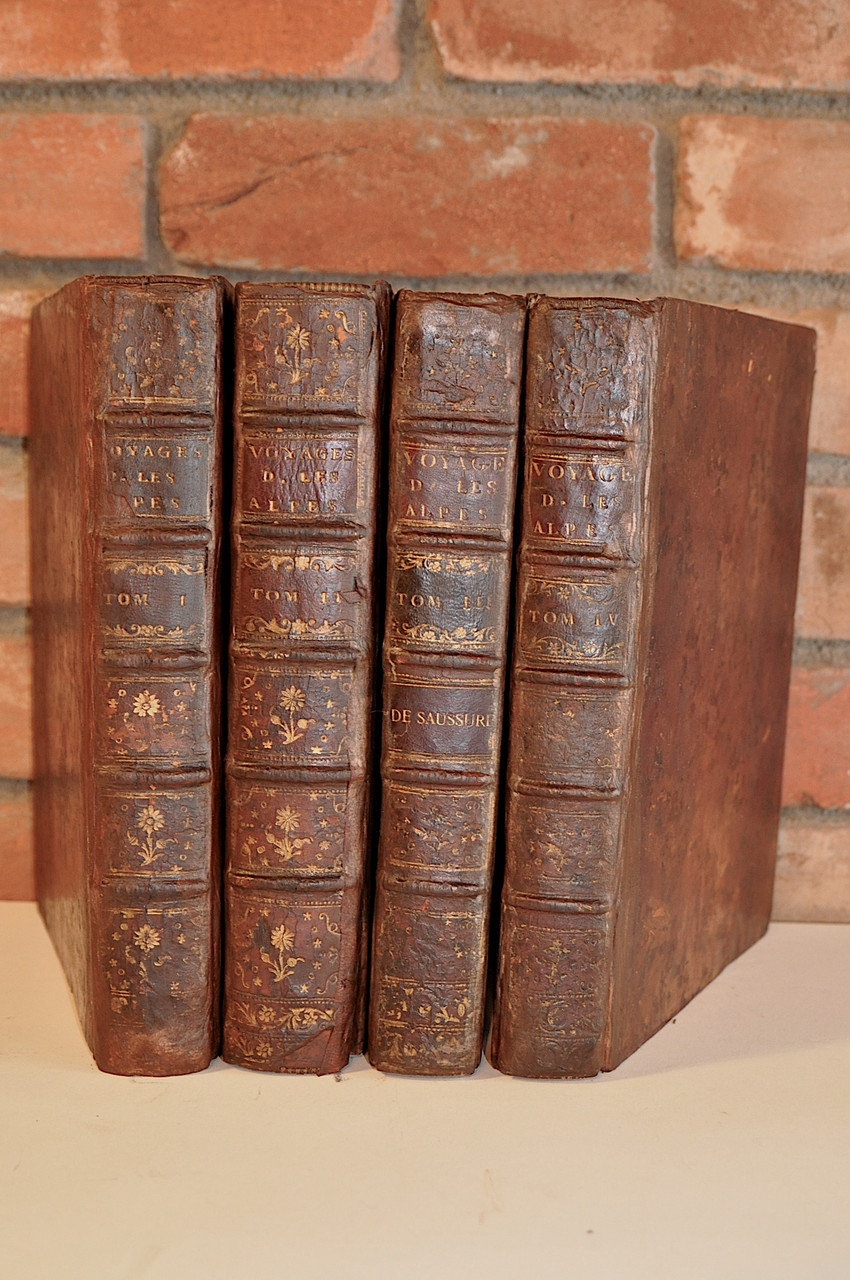 Product Description
Saussure, Horace Bénédict de;  Voyages dans les Alpes précédés d'un Essai sur l'histoire naturelle des environs de Genève. Neuchâtel, Samuel Fauche et Louis Fauche-Borel, 1779-1796.
Quarto, 4 vols. Vol 1: 1779, pp. [iv], xxxvi, 540, [1], 2 folded engraved maps, 8 engraved plates on 7 sheets.  Vol 2: 1786 pp. [iv], xvi, 641, folding engraved map, 6 engraved plates, 2 letterpress charts, [3]. Vol 3: 1796, pp. [iv], 532, 2 folded engraved plates, one engraved text plate. Vol 4: 1796, pp. [xx], 594, [2], 5 folded engraved plates.
The set is complete and in a contemporary calf with gilt spine titles. The bindings are tight, boards restored at hinges, six tooled spine panels, spine gilt lightly faded, marbled end sheets red text block edges.. The text and plates are very clean and bright, free of any stains. From the library of James B. Ford, former President of the Explorers Club and presented to that club. Book plate denoting his donation on the front paste down of each volume and blind stamp of Explorers Club on title pages and edge of plates. Over all a very good condition.
De Saussure (1740 - 1799) was a Swiss geologist and alpinist. Saussure was professor of physics and philosophy at the University of Geneva. He invented and perfected many atmospheric instruments to aid his observations, and his experiments in geology marked the beginning of  the science of petrology. The word geology was introduced into scientific nomenclature by De Saussure with the publication of the first volume of his Voyages dans les Alpes, a work that contains the results of more than 30 years of geologic studies. In 1783 De Saussure built the first hygrometer utilizing a human hair to measure humidity. He also performed early laboratory experiments on the origin of granite.
The results of his years of research are found in this four volume set which is the first edition of a great classic on the geology of the Alps as well as a milestone of Alpine literature. It is the first work to give a detailed account of this alpine range of Central Europe. During his years of field research De Saussure crossed the whole chain of the Alps no less than fourteen times and made in addition sixteen other traverses from the plains flanking the range to its central axis. This was done at a time when there were but few roads in that part of Europe and where the passage of the mountains was not only difficult but often dangerous. He climbed all the accessible summits, and collected specimens of rocks and minerals. He was a contemporary of Werner and like Werner believed that the Alpine granites  had crystallized out of the water of the primitive ocean. While De Saussure's book deals chiefly with the geology of the Alps, he also writes in the most glowing terms of the pleasure of mountaineering and Alpine explorations. De Saussure proformed experiments on the fusion of granites and porphyries and is considered the first experimental petrologist. He popularized the term 'geology' which replaced 'geognosy'. His work provided James Hutton with fundamental documentation for his pioneering work “ Theory of the Earth".