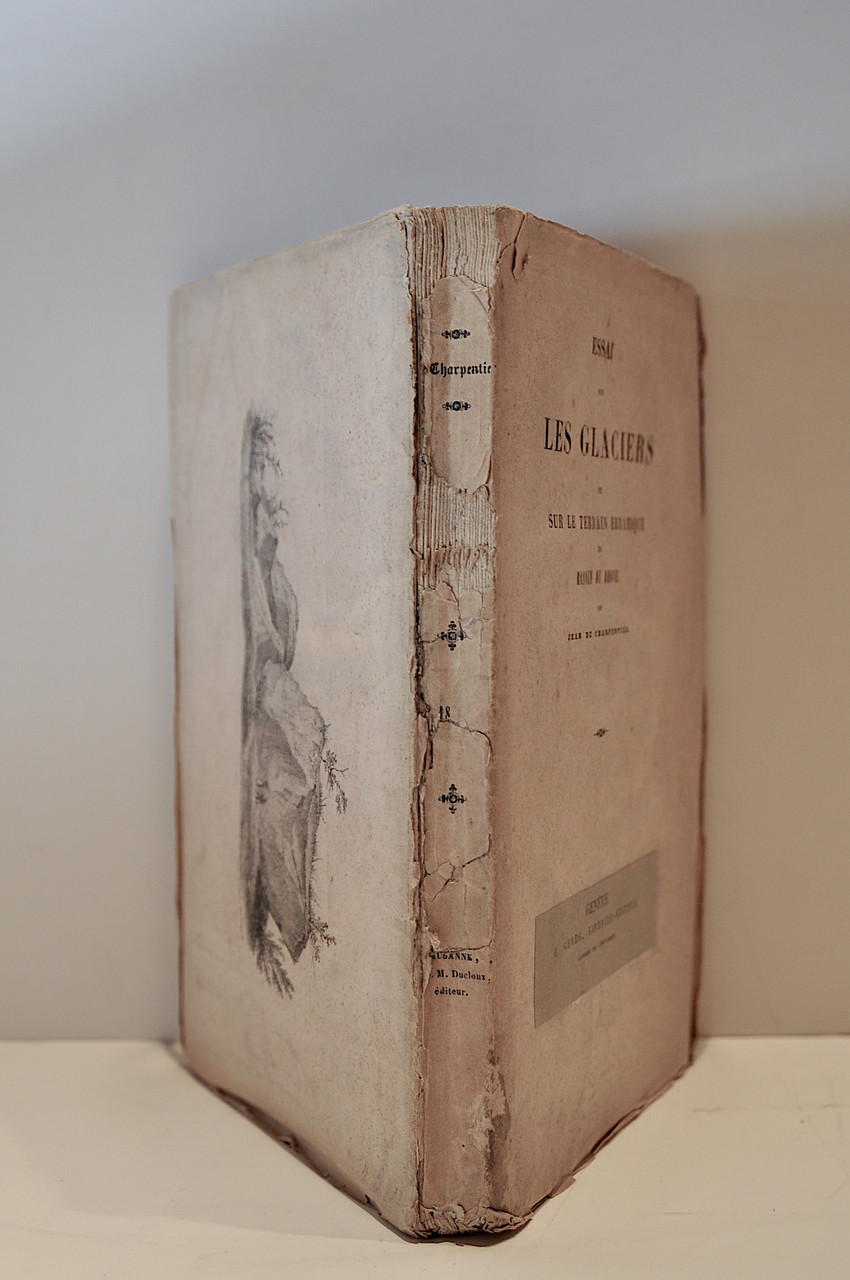 Product Description
Charpentier, Jean de; Essai sur les glaciers et sur le terrain erratique du Bassin du Rhône. Marc Ducloux, Lausanne, 1841. Octavo, pp. [vi], x, 363, folding colored map, 8 lithographed plates, 23 text figures, plus engraving on verso of rear wrap.
The work is complete and in the original printed title wraps. The binding is tight and clean, spine margin is partially perished. The text, map and plates are bright and clean, text untrimmed and uncut, very bright. The map "Carte du terrain erratique de la Vallée du Rhône", unfolds to 18 by 15 inches. The folding plate of the Rhône Glacier is beautiful. In very good condition.
Charpentier, (1786-1855) was a prominent German-Swiss geologist best known for his studies of the Swiss Alps and glaciers. He was one of the first proponents of the idea that the glaciers of the Alps had once extended far beyond their present environs. Charpentier began studying glaciers after the 1818 disaster where the Gietroz Glacier’s lake burst through the ice dam killing 44 people. His pioneering studies is now considered one of the greatest contributions to geology. The evidence he presents is based on “erratics” or huge boulders found across the lower Alpine landscape. To Charpentier, a flood was inadequate to explain this phenomena. The only possible explanation was that the glaciers of the Alps had once extended down the Rhône valley all the way to Lake Geneva and had carried the erratics down with them, and then left them behind when the glacier receded. Charpentier conveyed his ideas to Louis Agassiz, who transformed them into his the idea of an Ice Age, and who today receives most of the accolades for a discovery that was only partly his own. Although Agassiz is usually credited with the theory of the Ice Age, the primary progenitor of glacial geological theory was Charpentier.
Charpentier published his ideas on erratics in his "Essai sur les glaciers et sur le terrain erratique du bassin du Rhône", where he displayed seven erratics, including lithographs of not only the Pierre a Dzo, but the Pierre du Four. and the Pierre des Marmettes.
The first part of Charpentier’s work clearly describes Alpine glacial phenomena in a manner never seen before. Part two discusses erratic blocks, and the author concludes that only glaciers could have transported the blocks and left them in their present positions. It is now accepted by modern geologists that Charpentier is the Father of the glacial theory based his “Essai sur les Glaciers”.