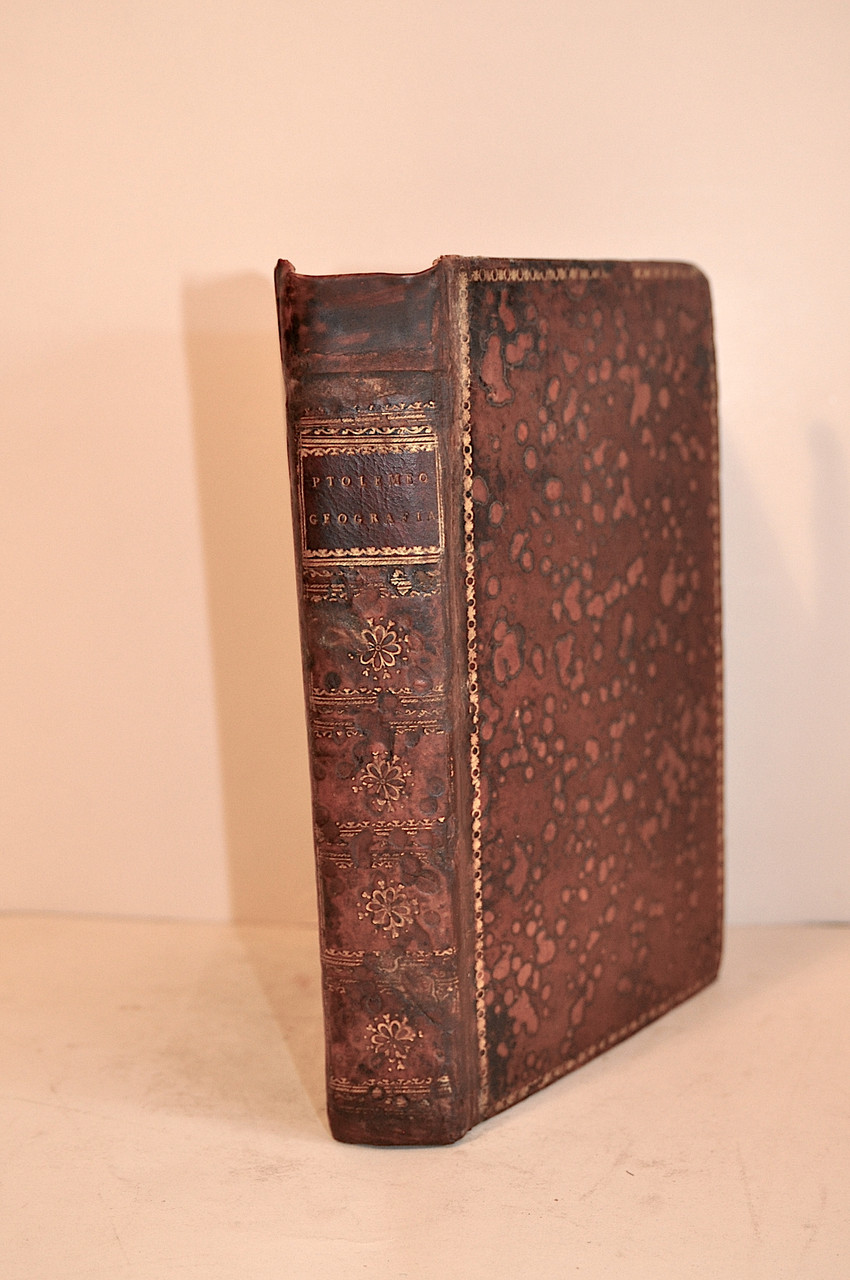 Product Description
Ptolemy, Claudius; La Geografia di Claudio Ptolemeo Alessandrino, Con alcuni comenti & aggiunte fattevi da Sebastiano Munstero ... ; con le tavole ... altre nuove aggiuntevi di ... Iacopo Gastaldo Piamo[n]tese ; ... ridotta in volgare Italiano da M.P.A. Mattiolo ..In Venetia : Per Gioa[n] Baptista Pedrezano ..., 1548. Octavo, decorative title page, dedication page with engraved vignette, 12, 214 leaves, some with woodcuts, 1 page register. The atlas is not present.
The text volume is complete and in a contemporary calf binding with gilt ruled boards and gilt spine titles and panels, marbled text block edges and end sheets. The binding is tight and clean with wear to corners. The text is clean and bright. Over all in very good condition.
Claudius Ptolemy (ca. 100-170 CE) was a mathematician, astronomer and geographer who worked in Alexandria, then a part of the Roman Empire, in the 2nd century AD. One of the most learned and influential men of his time, his theories dominated both astronomy and geography for nearly 1500 years. Claudius Ptolemy produced his eight-volume treatise, Geographia, around 150 CE in Alexandria. Combining astronomical observation with mathematical expertise, Ptolemy revolutionized the concept of mapmaking. His work unveiled the notion of latitude and longitude—the planar coordinate system that established locations for different lands, mountain ranges, and bodies of water on the spherical Earth. Ptolemy charted more than 8,000 places in the ancient world, from the Canary Islands to Korea. His writings were kept alive by Arabic scholars during the Middle Ages and reemerged in Europe during the Renaissance. The birth of printing led to wide dissemination of his great works on astronomy and geography. There were a number of editions of his Geographia beginning in 1477. These early editions included atlases of maps which were based on his original writings and were known as Ptolemaic maps. The first Italian translation which is offered here was made by Pietro Andrea Mattioli, (ca. 1500–1577).