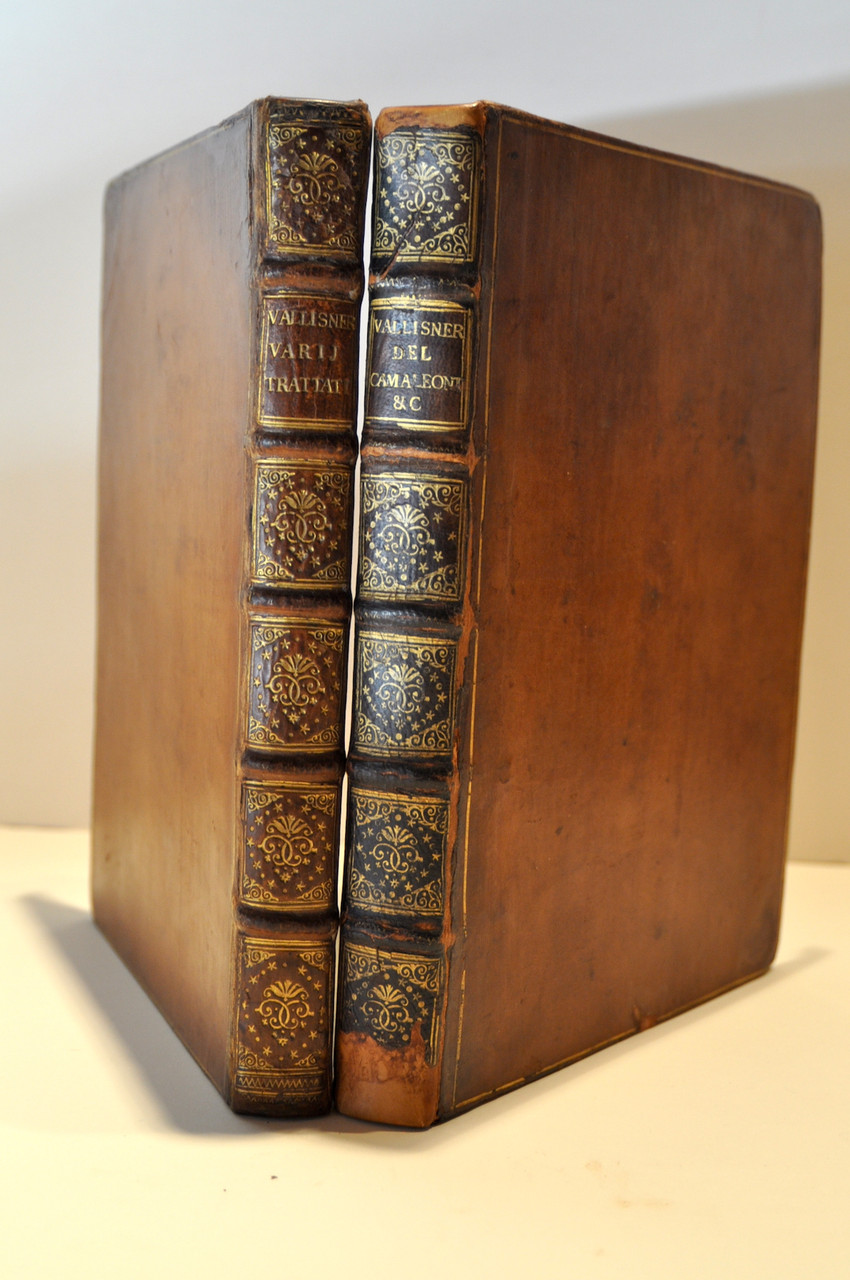 Product Description
Vallisneri, Antonio; Raccolta di vari trattati. Venise, Gio. Gabbriello Ertz, 1715. AND Opere diverse... cioe: I. Istoria del camaleonte affricano, e di varj animali d'Italia. II. Lezione accademica intorno all'origine delle fontane. III. Raccolta di varj trattati accresciuti con annotazioni, e con giunte.  Venezia: Giovanni Gabriello Ertz, 1715.  Opere diverse Three parts in one volume, Quarto, pp. engraved frontispiece portrait of the author, 8, 159, 12, 5 double page engraved plates, 160-180, 8 engraved plates, 181-200. 8, 87, 1 folded engraved plate. Raccolta, pp. 261, 16 engraved double page plates.
The two volumes are in a contemporary calf with ornate gilt spine panels and titles.Wear to outer edges of bindings, scuffing to boards, light damp stain to gutter area and margin of Istoria volume. Some soiling to margins of both volumes. Armorial book plate of Phillip Carteret Webb (1702-1770) to one volume with later owner’s book plate also present. Webb was an English barrister and antiquarian. A good set.
Antonio Vallisneri (1661 – 1730),  was an Italian medical scientist, physician and naturalist. He studied at Bologna, Venice, Padua, Parma. Vallisneri was a close friends and was influenced by many famous thinkers and naturalists including Bourguet Leibniz, Corti and Scheuchzer. He greatly admired Scheuchzer’s expertise as both a naturalist and antiquarian. Vallisneri was part of the Galilean school of experimental scientists. His research was in biology, botany, hydrology and geology. He is known for being one of the first researchers to have proposed abandoning the Aristotelian theories for an experimental approach based on the scientific principles suggested by Galileo Galilei. Vallisneri believed that scientific knowledge is best acquired through experience and reasoning. His keen interest in the natural sciences led to his collecting numerous specimens of animals, minerals and fossils. He would always put his observations in writing and is known to have had a very clear and precise style of writing and also followed Galilei's tracks in electing Italian as the language of choice for writing his treatises. This was a courageous choice in the scientific community of the time, which still considered Latin as the “language of knowledge. Opere Diverse and Raccolta are both first editions of Vallisneri's writings on natural history.