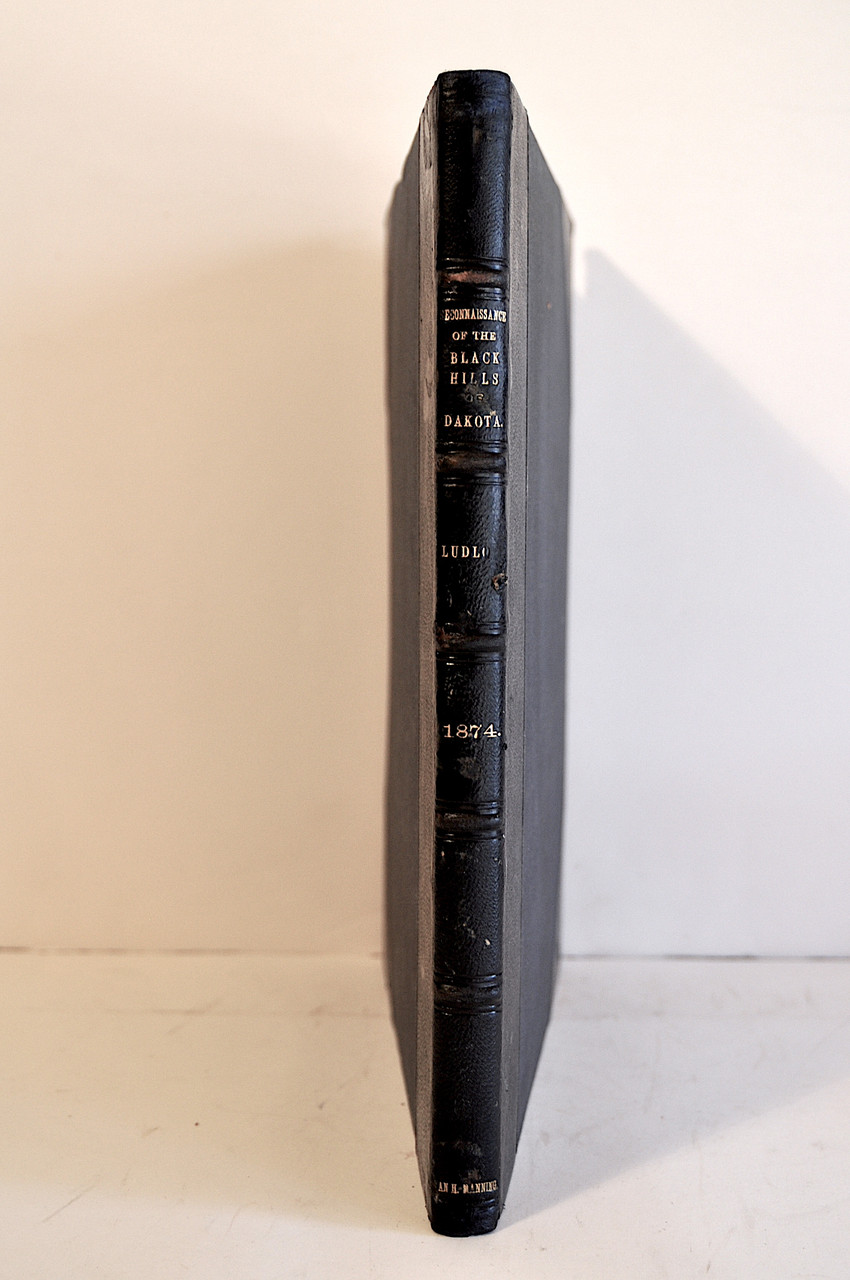 Product Description
Ludlow, William; Report of a Reconnaissance of the Black Hills of Dakota, made in the summer of 1874. Washingon, DC: Government Printing Office, 1875. Large quarto, pp. 121, 3 large folded maps (one is colored), 1 plate of fossils.
The work is complete and in a contemporary half calf over cloth boards with six spine panels and gilt titles, marbled bedsheets and text block edges. The binding is tight and clean with some scuffing to the boards, the text is clean and bright, the maps are very clean. In very good condition.
William Ludlow (1843 – 1901) was an officer in the US Corp of Engineers and a major general in the United States Army who served in the Civil War, Plains Indian Wars, the Spanish American War and led  scientific expeditions to Yellowstone National Park and the Black Hills. His expedition to the Black Hills led to the discovery of gold. George Armstrong Custer led the military detachment accompanying Ludlow's 1874 reconnaissance to the Black Hills. Civilian scientists and miners, newspaper reporters, and photographers. Newton Horace Winchell (1839 - 1905) describes the geology seen and provides the first geologic map of the area of the Black Hills containing the gold deposits. Paleontological, botanical and zoological reports are also included. It was a dispatch sent by Custer announcing the discovery of gold that  initiated the Black Hills gold rush. This inflamed the conflict with the Sioux, and ultimately led to Custer's death at Little Bighorn. Ludlow’s principal map is titled “Map of a Reconnaissance of the Black Hills, July and August 1874….and is on a scale of 12 miles to an inch. The entire reconnaissance is shown on the map. An even larger map is titled “Map of the Black Hills from a Reconnaissance by Cape. William Ludlow Corps of Engineers, 1874…on a scale of 3 miles to an inch. The third map is by N. H. Winchell. It is colored and is titled “A Geological Map of the Black Hills…."