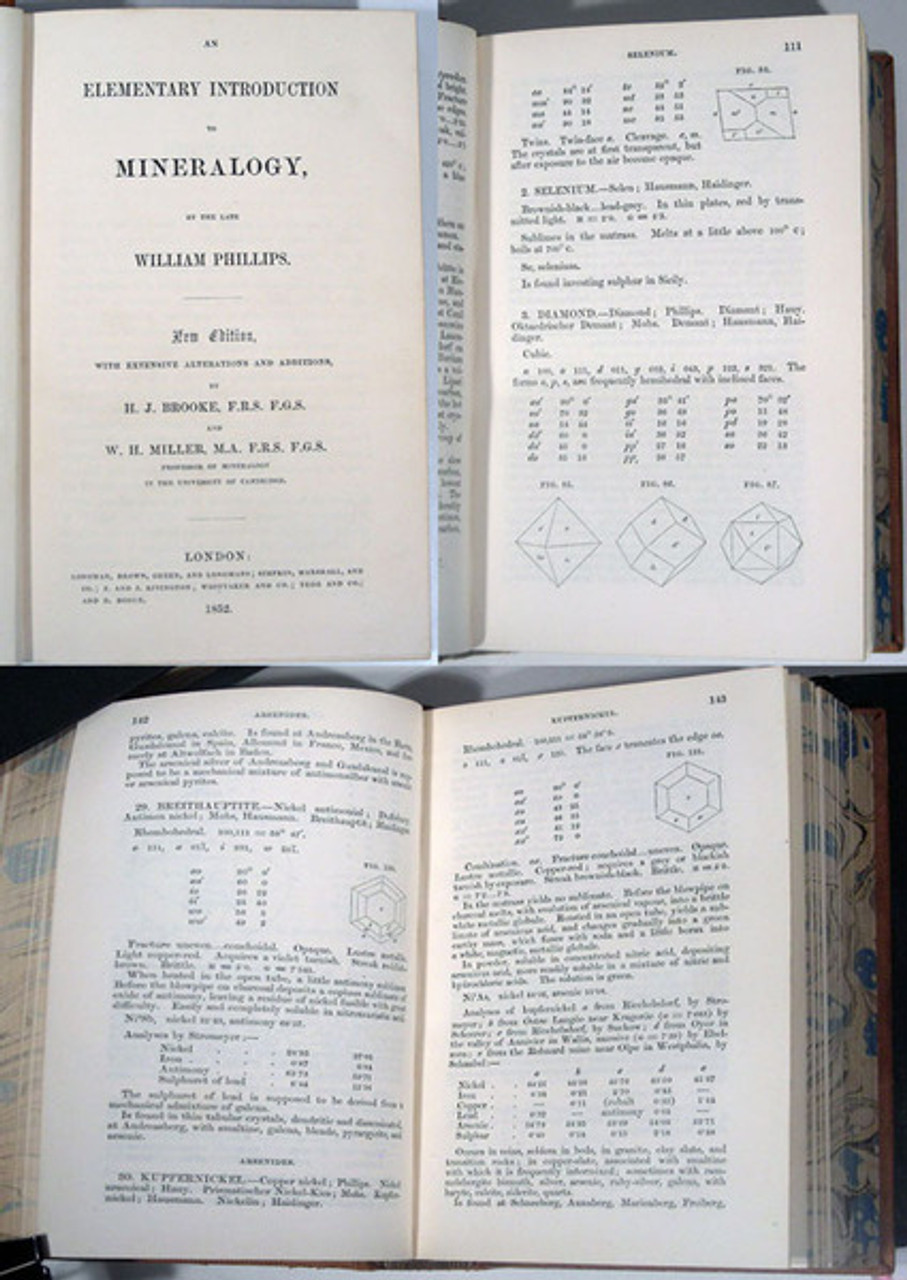 Phillips, William; An Elementary Introduction To Mineralogy, By The Late  William Phillips.  New Edition,  With Extensive Alterations And Additions, By H.J. Brooke, F.R.S. F.G.S. And W.H. Miller, M.A. F.R.S. F.G.S. Professor Of Mineralogy In The University Of Cambridge. London: Longman, Brown, Green, And Longmans; Simpkin, Marshall, And Co.; F. And J. Rivington; Whittaker And Co.; Tegg And Co.; And D. Bogue. 1852. Octavo, pp. xi, 1, 700, 647 illustrations.
The work is complete and in an ornate, gilt tooled calf binding with marbled text block edges and end sheets. The binding is tight and clean with light scuffing to the covers. The text is exceptionally clean, owner’s book plate (John Blowey) on paste down. In very good condition.

Phillips (1775-1828); an English chemist was the curator of the Museum of Practical Geology in London and more importantly, one of the original founders of the Geological Society of London. He wrote two of the earliest works on geology and mineralogy which could be described as true textbooks. In his writings, Phillips refused to become involved in the debate over the place of religion in geology preferring to give strict descriptions of the geological features. The rare first edition of Phillips' influential textbook “Introduction to Mineralogy” was published in 1815 in a very limited number of copies with the 1816 edition considered the standard first edition. That book was to form the basis for his other mineralogy works including “Elementary Introduction to Mineralogy”. The clear writing style that is the trademark of the author led to the book’s popularity and it became the standard text of the time with several editions in England and America.
The 1852 edition was co-authored with Henry James Brooke and William Hallowes Miller, and this work is considered one of the best textbooks of crystallography and mineralogy ever published. In printing sequence this work would be considered a sixth edition of William Phillips' Introduction to Mineralogy (1st ed., London, 1816). Written as it was, however, a quarter century after Phillips death, with thorough revision and updating, this work has been known ever since its publication as the "Brooke & Miller. Crystallography" In the preface, Brooke writes that his contribution to the work was in supplying "such specimens and crystals as it appeared desirable again to examine and measure. In every other respect the treatise has been composed and arranged entirely by Professor Miller."
The volume begins with an introduction to the science, the first significant portion of which is devoted to crystallography. The system adopted is essentially the same as that Miller first presented in his earlier A Treatise on Crystallography (Cambridge, 1839). The names adopted for the six systems of crysalization are cubic, pyramidal, rhombohedral, prismatic, oblique, and anorthic. Figures are given in the descriptive mineralogy, illustrating the crystalization of the species. The crystallographic notation employed are the Indices of Miller. Other sections of the introduction describe the optical, physical and chemical properties of minerals. The descriptive mineralogy based upon chemical makeup then follows. Species are listed with notes about their common synonyms, their known crystal forms, their chemistry following Rammelsberg's analyses, their optical characters including refraction and polarization and other physical properties. An appendix lists minerals which are not fully described or of doubtful composition. The work closes with an index to the species listed. (Schuh)