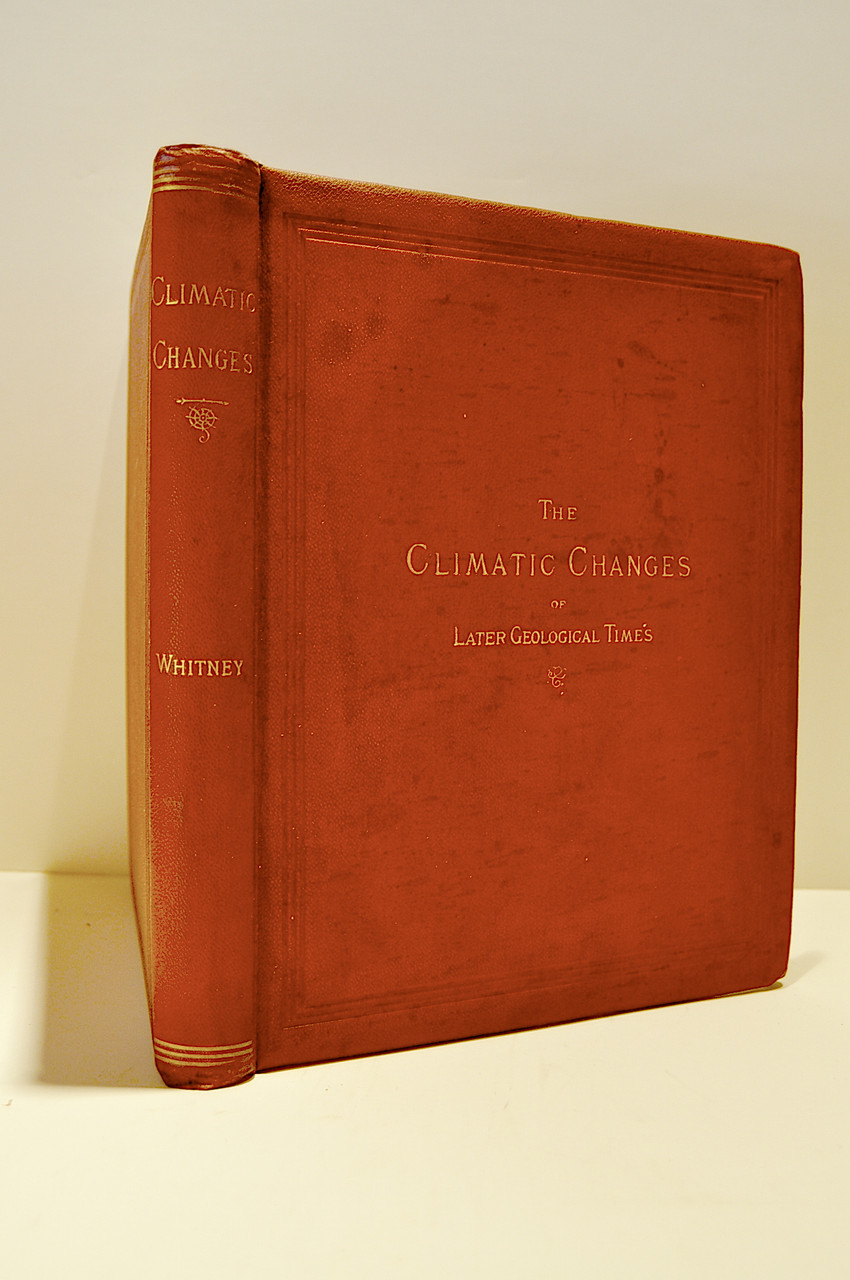 Product Description
Whitney, Josiah Dwight;  The Climatic Changes of Later Geological Times A Discussion based on Observations made in the Cordilleras of North America. Cambridge: University Press, John Wilson and Son, 1882. Memoirs of the Museum of Comparative Zoology. Harvard College, Vol. VII, no. 2. Large quarto, pp. xiv, 394.
The work is complete and in the original wine red stamped cloth with gilt cover and spine titles. The binding is tight and clean, corners lightly bumped. The text is very clean and bright, free of stamps and signatures. In very good condition.
Josiah Dwight Whitney (1819 – 1896) was a prominent American geologist, professor of geology at Harvard University (from 1865), and chief of the California Geological Survey (1860–1874). Through his travels and studies in the principal mining regions of the United States, Whitney became a foremost authority of his day on the economic geology of the United States.
Whitney’s entrance into a career in geology was by chance. In 1841, he was preparing to enter Harvard Law School, when he happened to hear a lecture on geology by Charles Lyell. He decided to change career plans and sailed to Europe in 1842 to continue his studies in science. For the next five years he traveled through Europe and studied chemistry and geology in France and Germany.
When Whitney returned home in 1847, he was hired to assist Charles T. Jackson in making a federal survey, of the Lake Superior land district of northern Michigan, which was about to become a major copper and iron mining region. When Jackson was dismissed from the survey, John W. Foster and Whitney completed the survey in 1850 and the final report was published under their names to rave reviews. This was Whitney’s first of many major publications. Building on this experience, Whitney became a mining consultant, and eventually wrote the book, Metallic Wealth of the United States in 1854. It was considered to be the standard reference for the next 15 years. During the 1850s, Whitney participated in geological surveys of Iowa, Illinois, and Wisconsin. He was appointed state chemist and professor in the Iowa State University in 1855, and together with James Hall, he issued reports on Iowa's geological survey (1858-1859). In 1858-1860, he took part in the survey of the lead region of the Upper Missouri River, publishing, again with Hall, a report in 1862.
In 1860, he was appointed the state geologist for California and was instructed by the legislature to undertake a comprehensive geologic survey of the state. To carry out the California Geological Survey, he organized an eminent, multi-disciplinary team, including William H. Brewer, James Graham Cooper, William More Gabb, Charles F. Hoffmann, Watson Andrews Goodyear, and Clarence King. They began a survey that covered not only geology and geography, but also botany, zoology, and paleontology. Although significant progress was made, Whitney made the mistake of first publishing two volumes on paleontology when the legislators were clamoring for information about gold deposits. The legislature grew impatient with the scope and pace of the survey work and cut the budget and then in 1868 eliminated the survey. Whitney was to publish the remaining reports of the survey with his own money. These included the above work on climate changes which is still considered a major scientific work on glaciations not only in North America but also Greenland. He discusses the glacial and surface geology of the Pacific Coast, former glaciations in the Sierra Nevada, and the warming climates and drying of lakes in the western United States. He then discusses the desiccation of Asian regions and implications for the climate in both North and South America. He then devotes a lengthy part of the work to desiccation, not only as part of a glacial cycle but also due to human activity. Whitney was one of the first scientists to link human activity to desiccation. He discusses glacial cycles and the evidence for earlier geological cycles of glaciation.