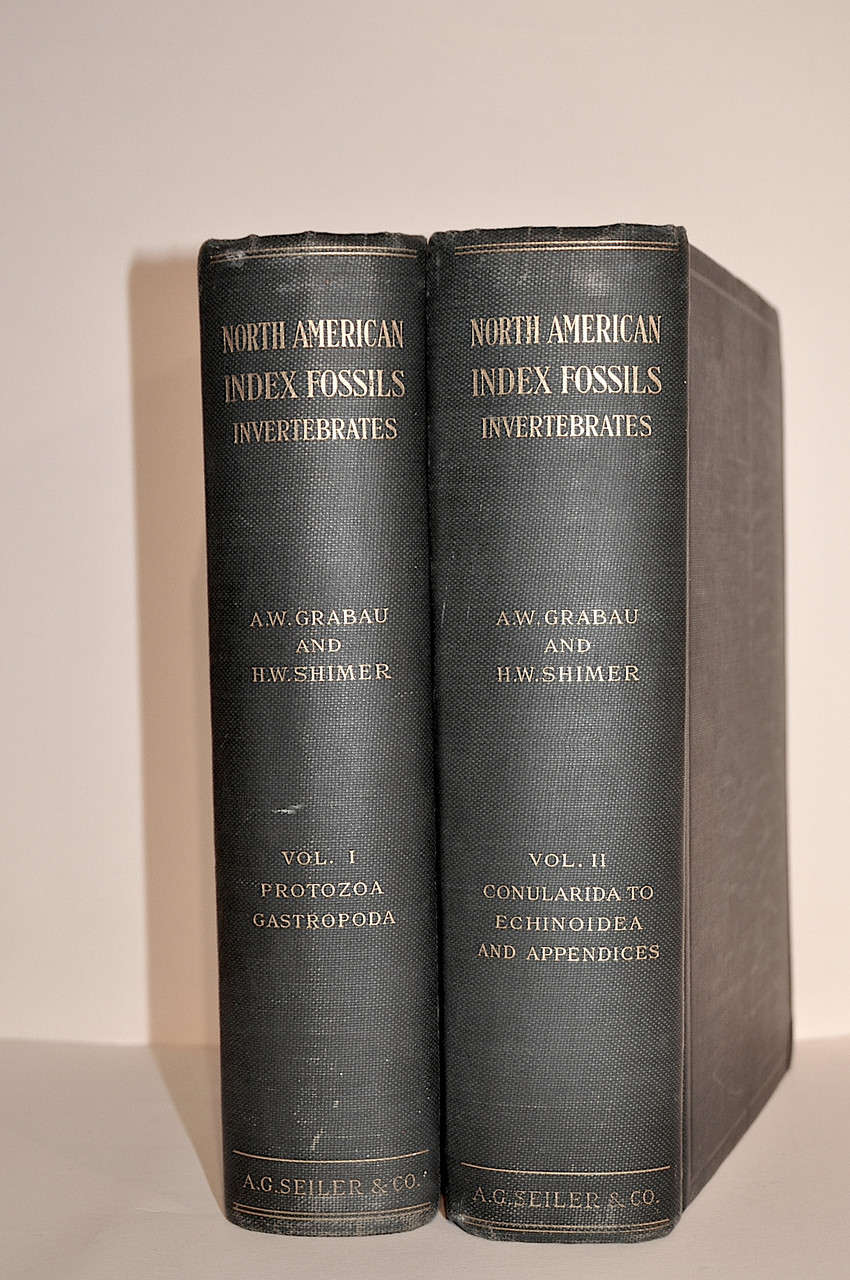 Product Description
Grabau, Amadeus W. & Shimer, H. W.; North American Index Fossils. Invertebrates Vols. I & II. A. G. Seiler & Co., 1909-1910.  Volume I, pp. viii,  853,  b/w text illustrations1-1210. Volume II, pp. xiv, 1, 909,  b/w text illustrations 1211-1937.
The two volumes are complete and in the original cloth bindings with gilt spine titles. Bindings are tight and clean with minor shelf scuffing and minor speckling to front cover of volume 1. Front inner hinge of volume one nicely re-enforced. The text in both volumes is clean with no stains, markings or stamps. Previous owner’s signature and small stamp on first blank end sheet. In very good condition.
Amadeus William Grabau (1870—1946), was an American paleontologist and geologist. He is considered the father of Chinese geology, was an expatriate American geologist. He was raised in the Buffalo, New York area and acquired an interest in fossils at a very young age. In a correspondence course in mineralogy, he impressed the prominent geologist William Otis Crosby.  Crosby hired him at the Boston Society of Natural History in 1890, and arranged for his education at MIT, and Harvard. After completing his studies, he taught at MIT and then at RPI. In 1901 he became a professor at Columbia University in New York. His pro-German attitudes during World War I led to his leaving America for China. He was appointed professor at Peking National University in 1919. As part of his life's work, he conducted a geological survey of China. Despite the Japanese invasion of China and advent of WW-II he remained in China and was imprisoned by the Japanese Army. He suffered serious health issues during this time and died in 1946.
He was a prolific writer on geology and paleontology. In 1909-1910 Grabau worked with the noted MIT geologist and paleontologist H. W. Shimer to publish the first index of American invertebrate fossils. That pioneering set is offered here. Volume one covers, Protozoa, Porifera, Hydrozoa, Anthozoa, Bryozoa, Brachiopoda, Pelecypoda, Scaphopoda, and Gastropoda. Volume two covers,Conularida, Pteropodia, Cephalopodia, Annelida, Trilobita, Phyllopoda, Ostracoda, Cirripedia, Malacostraca, Merostomata, Archnida, Myriopoda, Insecta, Cystoidea, Blastoidea, Crinoidea, Ophiuroidea, Echinoidea, and then finishes with appendices to the set.