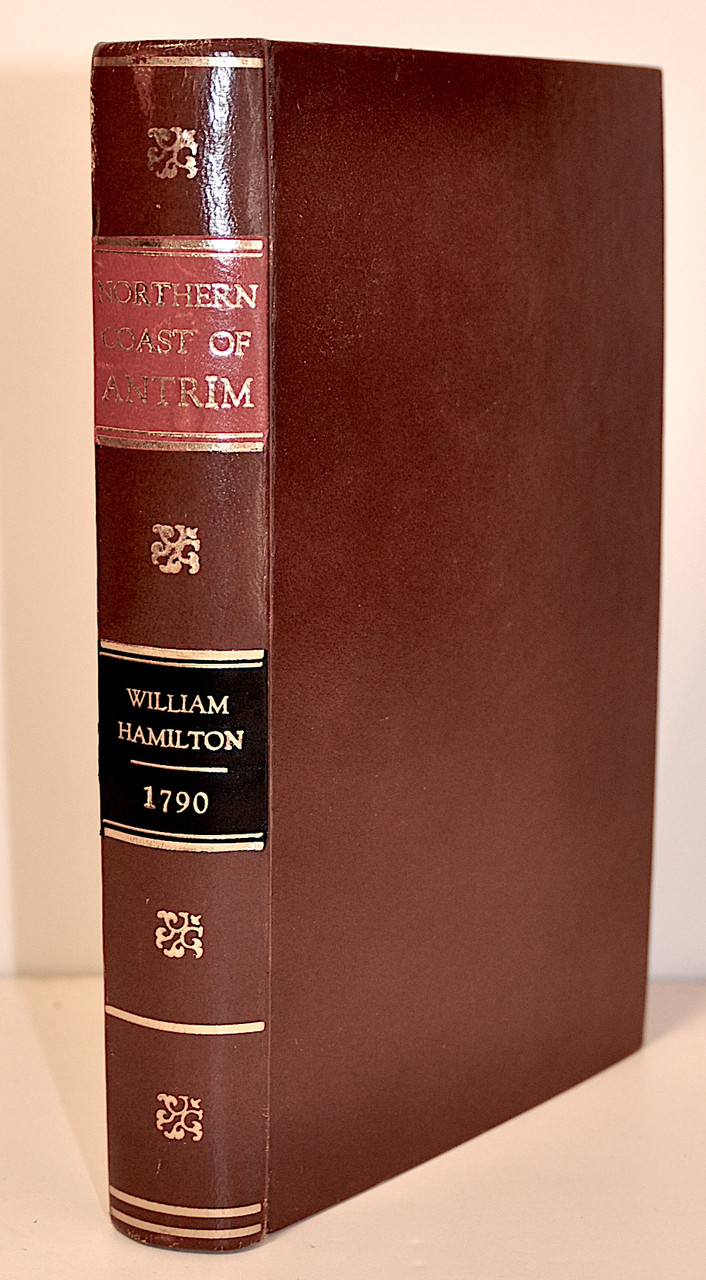 Hamilton, William; Letters Concerning the Northern Coast of the County of Antrim. Containing such circumstances as appear worthy of notice respecting the antiquities, manners and customs of that country. Together with the natural history of the basaltes, and its attendant fossils, In the Northern Counties of Ireland. The whole illustrated by an accurate map, And engravings of the most interesting objects on the coast. Dublin: Printed by George Bonham for Pat Byrne et. al, 1790. Octavo, pp. xi, 4, 138, half title for part 2, pp. 190, folded engraved map, 3 folded engraved plates, two engraved text images at head of each part.

The work is complete and in  a modern full calf binding with gilt panels and spine titles. The binding is tight and clean with minor wear to spine edge. The text and plates are very clean. Previous owner’s signature on title and end sheet with 1829 date. In very good condition.

The Reverend William Hamilton, FRSE, MRIA, FSAS (1755–1797), was an Irish Protestant minister, geologist, meteorologist and antiquarian. After publication of his 'Letters Concerning the North Coast of Antrim', Hamilton was killed by a mob for his pro-British views and his death characterized the anti-establishment sentiment within the Irish community. While Hamilton was entirely Irish, his pro-British position was no longer tolerated.The action was an important precursor to the Irish Rebellion of 1798. His book is considered a major contribution to our understanding of volcanism and the volcanic origins of basalts in the region as well as the place of volcanism in the evolution of the planet. It was translated into several languages. The letters within his work provide a sketch of the northern coast of Antrim, an account of the island of Raghery, a description of Ballycastle with remarks on the state of its manufactories and collieries, an account of the fishery, a geologic history of the basalts forming the Giant's Causeway and a description and analysis of the columnar basalts as well as a discussion of the volcanic origins of the rocks and basalts in general. He discusses the basaltic Island of Caraig a Ramhad, the Cape Pleaskin in the Promontory of Bengore, and  Casan An Fhir Leith or the gray man's path in the Promontory of Fairhead. The plates provide views of many of the areas visited.