Tyndall, John; The Glaciers of The Alps. Being a Narrative of Excusions and Ascents, an Account of the Origin and Phenomena of Glaciers, and An Exposition of the Physical Principles to which they are related.

Tyndall, John; The Glaciers of The Alps. Being a Narrative of Excusions and Ascents, an Account of the Origin and Phenomena of Glaciers, and An Exposition of the Physical Principles to which they are related. 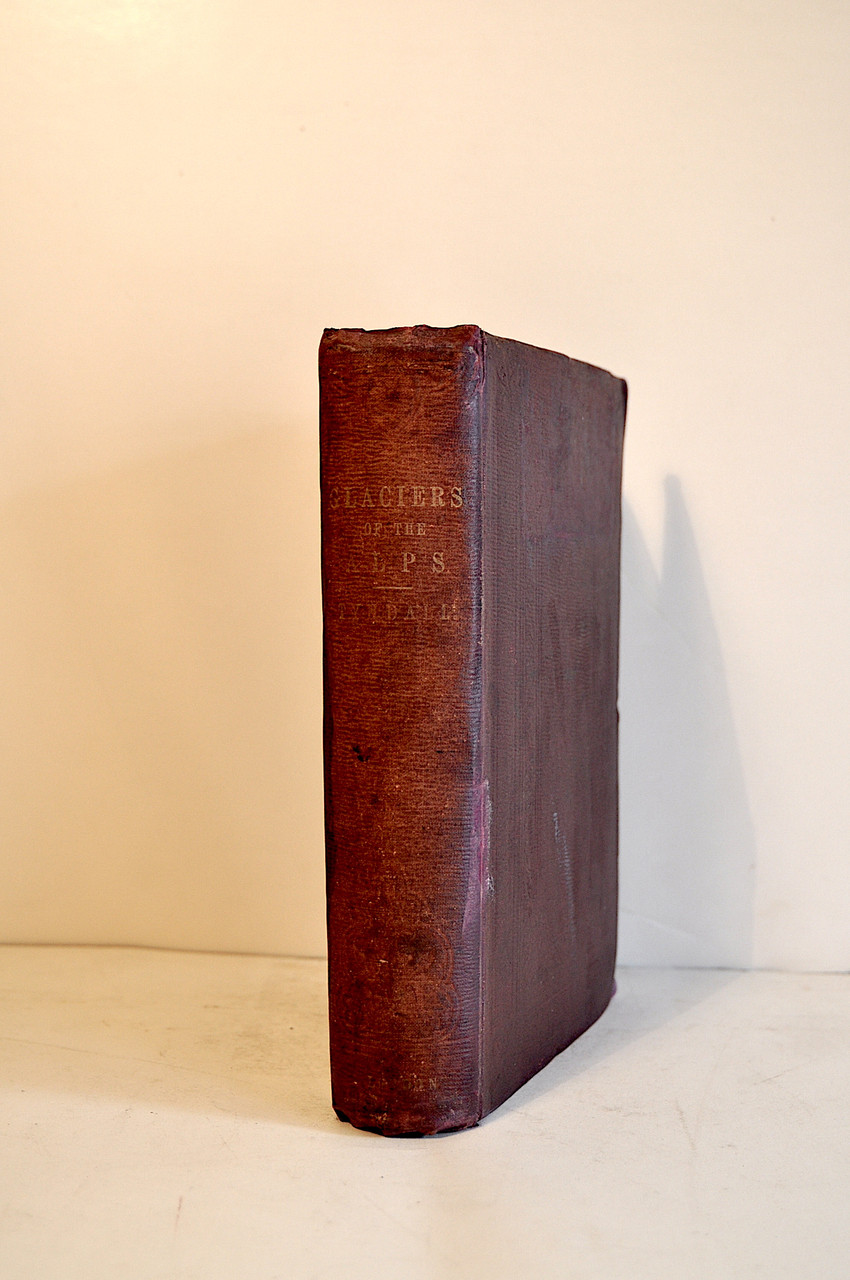 Product Description
Tyndall, John; The Glaciers of The Alps. Being a Narrative of Excusions and Ascents, an Account of the Origin and Phenomena of Glaciers, and An Exposition of the Physical Principles to which they are related. First edition, London, John Murray, 1860.   Octavo, pp. xxii, 444, 32 pages ads, frontispiece, 61 illustrations, some full page.
The work is complete and in the original plum colored cloth with gilt spine titles. Spine is sun faded as are gilt titles. Binding edges restored, inner hinges tightened, old label removed from front cover. Gainsborough Library stamp on title page. Text is clean. In good condition.
John Tyndall FRS ( 1820 - 1893) was a prominent 19th-century Irish physicist. His initial scientific fame began in the 1850s from his study of diamagnetism. Later he made discoveries in the realms of infrared radiation and the physical properties of air, proving the connection between atmospheric CO2 and what is now known as the greenhouse effect. This was understood and accepted as science in 1859.Tyndall also was interested in glaciers. He published more than a dozen science books which brought 19th century experimental physics to a wide audience. From 1853 to 1887 he was professor of physics at the Royal Institution of Great Britain in London. Tyndall’s interest in glaciers led to his expedition to the Alpine mountains in 1856  and that resulted in his becoming a pioneering mountain climber. He visited the Alps almost every summer from 1856 onward. He was a member of the very first mountain-climbing team to reach the top of the Weishorn in 1861, and led one of the early teams to reach the summit of the Matterhorn in1868. His name is associated with the "Golden Age of Alpinism" — the mid-Victorian years when the more difficult of the Alpine peaks were summited for the first time.
In the Alps, Tyndall studied glaciers, and especially glacier motion. His explanation of glacial flow brought him into dispute with others, particularly J. D. Forbes. Much of the early scientific work on glacier motion had been done by Forbes, but Forbes at that time didn't know of the phenomenon off regeletin which was discovered a little later by Michael Faraday. Regelation played a key role in Tyndall's explanation and he felt the credit for describing glacier motion belonged to many.  Tyndall commented: "The idea of semi-fluid motion belongs entirely to Louis Rendu; the proof of the quicker central flow belongs in part to Rendu, but almost wholly to Louis Agassiz and Forbes; the proof of the retardation of the bed belongs to Forbes alone; while the discovery of the locus of the point of maximum motion belongs, I suppose, to me.”  Tyndall's book is divided into Two Parts: the first is chiefly narrative, and the second chiefly scientific. In the first part, Tyndall describes the role of an Alpine explorer and the everyday challenges as well as the scientific approaches taken to acquire accurate data. In the second part he explains and classifies his data on glaciers and the dynamics of movement of the glaciers. Two glaciers are now named in his honor. Tyndall Glacier located in Chile and Tyndall Glacier in Colorado, as well as Mount Tyndall in California and Mount Tyndall in Tasmania.