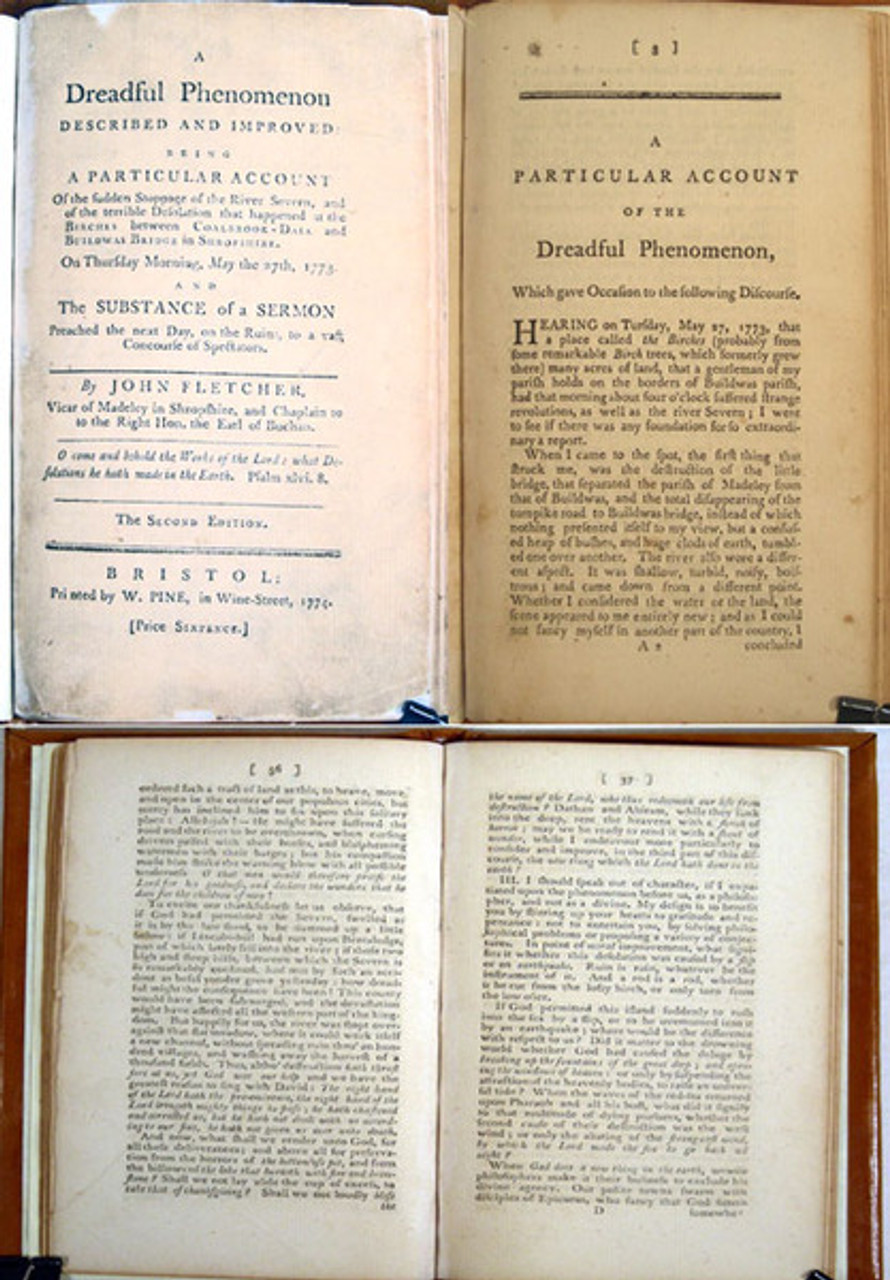 Fletcher, John William; A Dreadful Phenomenon Described and Improved: Being a Particular Account of the Sudden Stoppage of the River Severn, and the Terrible Desolation that happened at the Birches between Coalbrook-Dale and Buildwas Bridge in Shropshire, on Thursday Morning, May the 27th, 1773 and the substance of a sermon preached the next day of the ruins ...Bristoal, W. Pine, 1774.

The work is complete and in a modern calf binding with gilt titles. The binding is tight and clean, text is clean with moderate toning to title page and light toning to last text page. In very good condition.

John William Fletcher (1729 – 1785), was an English cleric. He was born at Nyon in Switzerland and his original name was Jean Guillaume de la Flechere. He was educated at Geneva, but, chose an army career over a clerical one. An accident prevented his sailing with his regiment to Brazil, and after a visit to Flanders, where an uncle offered to secure a commission for him, he went to England, learned the language, and in 1752 became a tutor in a Shropshire family. Here after coming under the influence of the new Methodist preachers he became a contemporary of John Wesley, (the founder of Methodism) and in 1757 took orders and was ordained. Fletcher was to become a key interpreter of Wesleyan theology in the 18th century, and one of Methodism's first great theologians. He often preached with John Wesley and for him, and became known as a fervent supporter of the revival. ?He turned his back on the wealthier living of Dunham, and chose a humble one of Madeley in Shropshire, where for twenty-five years (1760-1785) he lived and worked and was much admired by the community.?In the spring of 1773 a conflagration struck in the region of the River Severn between Wales and England. Fletcher went to the region and provides the first eyewitness written account of the destruction. He offers reasons as to why the river changed its course to a new channel and reasons for the fracturing of the adjacent lands. Much of his discourse has its foundation in Biblical teachings. The work was first printed in 1773 and the above second edition in 1774.