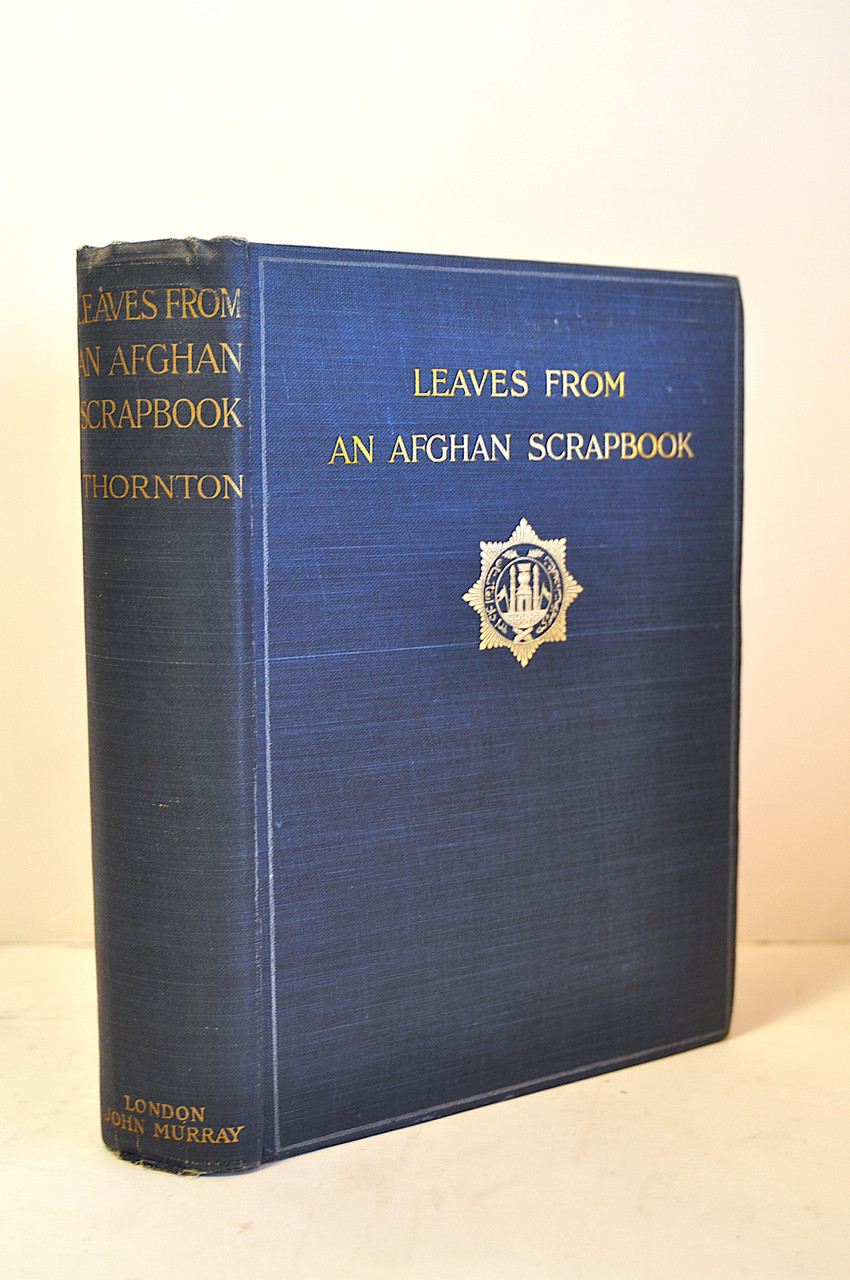 Product Description
Thornton, Ernest and Annie; Leaves from an Afghan Scrapbook. The Experiences of an English Official and his Wife in Kabul.  London, John Murray, 1910. First edition, 1st printing. Small quarto, pp. xvi, 225, frontispiece portrait of Sirdar Nasarullah Khan, map, 19 plates.
The work is complete and in the original blue cloth with gilt cover titles and vignette and gilt spine titles. Binding is tight and clean, minor edge scuffing, the text and plates are clean and bright with private owners book plate on paste down and minor toning to end sheets. In very good condition.

Ernest Thornton was an English official and industrial manager who in 1892 was engaged by the ruler of Afghanistan, Amir ʻAbd al-Rahman Khān (reigned 1880−1901), to establish a tannery and leather factory in Kabul. After encountering numerous difficulties with the enterprise, Thornton resigned his post and left Afghanistan the following year. In late 1902, he received an offer from the Afghan government to return to Kabul to make another attempt at establishing a factory. Accompanied by his wife Annie, Thornton lived in Afghanistan in 1903−9, where he successfully built and operated a plant that produced boots for the Afghan army. Thornton, who at one point was one of only two Englishmen living in the country, worked closely with ʻAbd al-Rahman’s successor, Amir Habibullah Khān (reigned 1901−19), who sought to modernize his country but whose real passion was golf. Leaves from an Afghan Scrapbook is an account by the Thorntons of their life in Afghanistan. It offers a detailed portrayal of Amir Habibullah Khān and life at the court as well as observations on Afghan religious life, customs, dress, music, and economic activity. Of particular interest are Ernest Thornton’s observations on the speed with which a largely uneducated Afghan workforce with little or no formal education or training for industrial labor was able to master modern technologies and operate up-to-date machinery imported from Europe. Thornton's wife, Annie, also played an important role, organising "a tamasha, or entertainment, for their Afghan workforce in their Kabul garden, combining an Afghan pilau with games from an English village [Ernest also found time to organise a football match]. While her husband was at the tannery, Annie spent time in the court of the Amir Habibullah, Abdur Rahman's successor, a passionate gardener and gourmet. The Amir shared his horticultural interests with her; and she is credited with introducing the daffodil to Kabul in 1908. She also taught his chefs a number of English recipes, amongst which pudding became his favorite.