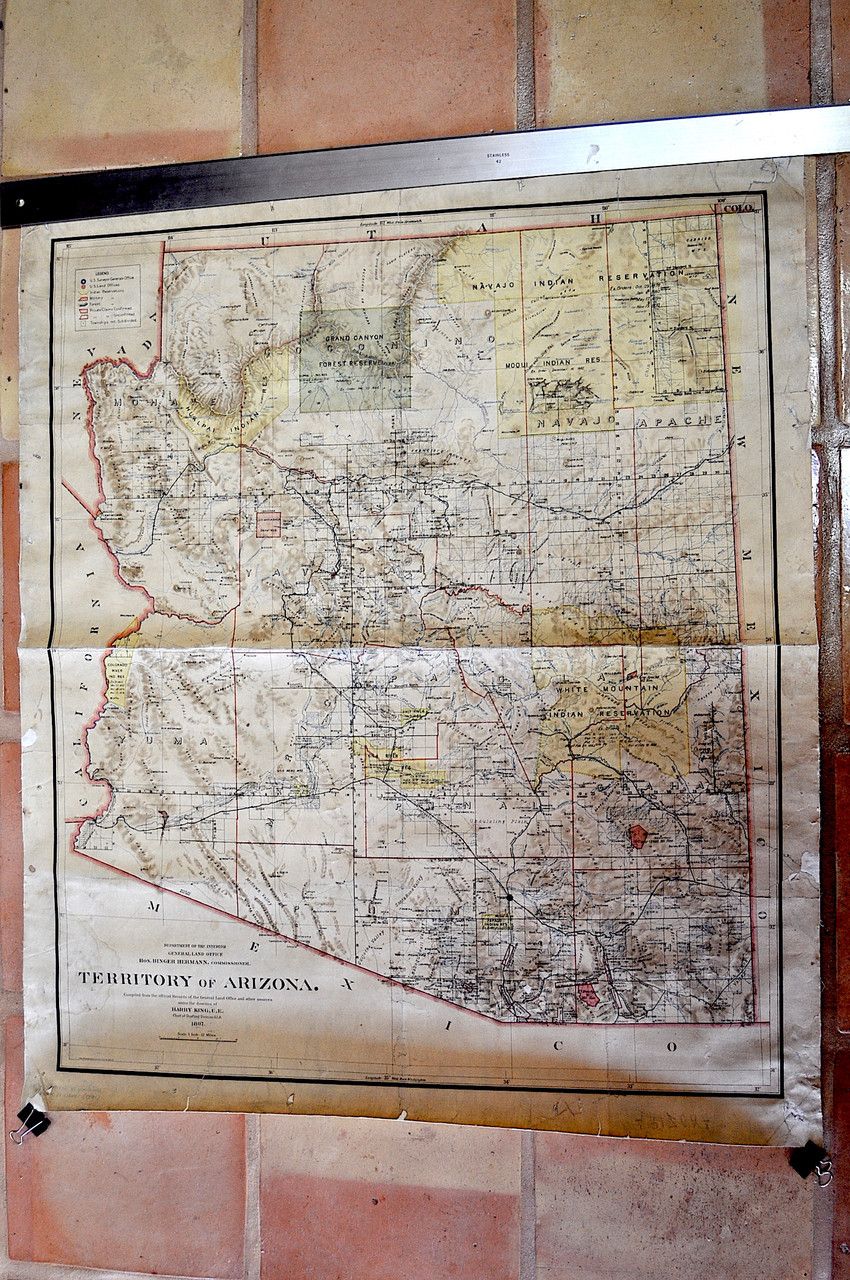 Product Description
King, Harry; Territory of Arizona. Compiled from the Official Records of the General Land Office and other Sources…Dept. of The Interior, GLO, Washington, 1897. Large (40” high x 33” w) rolled hand colored map on a scale of 1 inch to 12 miles.
The map is linen backed as issued and rolled. Early crease in center of map, early penned title on verso of map in corner with scale noted. Minor wear to edges, light damp stain on one edge, small 1/4 inch chip in one area of map. Over all in very good condition. A rare early printing of this important map. Will be shipped lightly rolled in a mailing tube.
Harry King was the chief draftsman for the General Land Office (GLO). The GLO was an independent agency established in 1812 within the United States government and was charged with overseeing the public domain lands. Until 1812 these lands were overseen by the Department of the Treasury.  The GLO was responsible for the surveying, platting, and sale of the major portion of the lands west of the Mississippi River. When the Dept. of the Interior was created in 1849, the GLO was placed under its authority and remained under its authority until the US Forest Service was formed in 1905. In addition to overseeing the public lands the GLO performed the needed surveys to produce maps and plans of territories and individual areas. In 1946 the GLO became the Bureau of Land Management. The GLO produced some of the most important maps of the western United States as the country expanded, mining regions were opened and towns developed.
The GLO produced a major map of Arizona Territory. This large and historically important map of Arizona was produced as the mineral boom in the territory was taking hold and is considered one of the best and most detailed maps of Arizona Territory. The legend notes the various US Surveyor General's offices in the Territory, US Land Offices, Indian Reservations, Military Reservations, Forest Reservations, Private Claims Confirmed, Private Claims Unconfirmed, and Townships not yet subdivided. The map notes towns, roads, railroads, railway and stagecoach stations, mines, wells, mountains, rivers, and a host of other details.  Tombstone, founded a few years earlier, is shown on the map as is Bisbee further to the south.