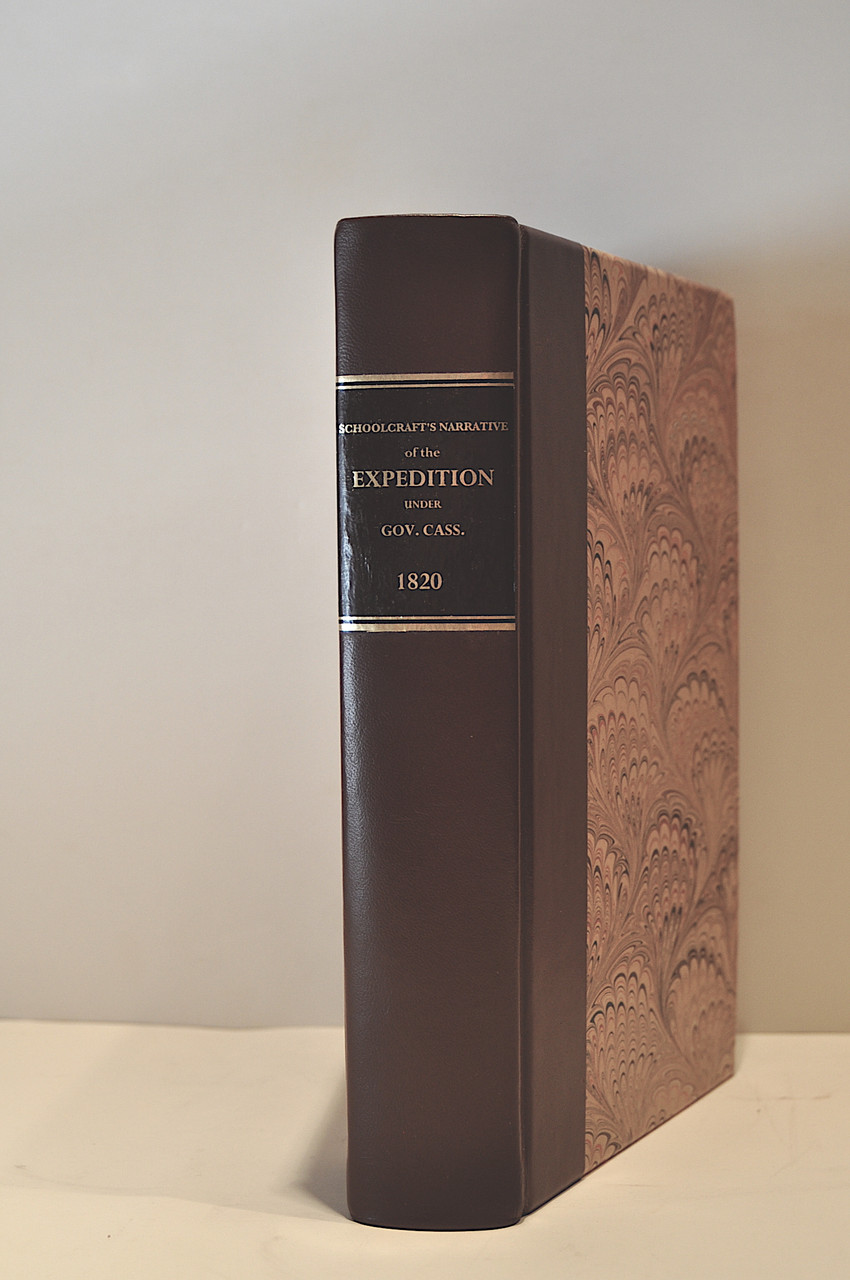 Product Description
Schoolcraft; Henry R.; Narrative Journal of Travels Through the Northwestern Regions of the United States Extending From Detroit Through the Great Chain of American Lakes, to the Sources of the Mississippi River in the Year 1820….Embellished With a Map and Eight Copper Plates. E. & E. Hosford, Albany, NY, 1821. Quarto, pp. xv, 419, 4, tipped in errata, folded partially hand colored map, 8 copper plates (1 partially hand colored).
The work is complete and in a modern half calf over marbled boards with gilt spine titles. The binding is tight and clean. The text block is untrimmed with moderate foxing throughout but the plates are only lightly foxed and map is clean. In good+ condition.
Henry Rowe Schoolcraft (1793 – 1864) was an American geographer, geologist, and ethnologist noted for his early studies of Native American cultures, as well as his expeditions to the source of the Mississippi and studies of the mineral deposits of the upper midwest. He is also noted for his major six-volume study of Native Americans published in the 1850s.  He entered Union College in Schenectady, NY at age 15 and later attended Middlebury College in VT. He was especially interested in the geology and mineralogy of regions he visited. In 1846 the Schoolcraft was commissioned by Congress for a major study, known as "Indian Tribes of the United States", which was published in six volumes from 1851 to 1857. That work is beautiful and one of the first studies of Native Americans published.
After suffering a bankruptcy in 1817 Schoolcraft decided to head west. In the summer of 1818 he arrived in Potosi, the heart of Missouri Territory’s lead mining region. Schoolcraft surveyed the area’s mining and smelting operations before he decided to investigate rumors of rich lead deposits in the White River Valley. He convinced Levi Pettibone, a fellow New Yorker, to accompany him on a three-month, nine-hundred-mile journey through the thinly populated White River Valley region of the Missouri and Arkansas Ozarks. After completing tests and recording their findings they returned to Potosi,where  Schoolcraft quickly wrote and published “A View of the Lead Mines of Missouri” published in 1819. This is the earliest published scientific description of a mining district in the United States.This work established his scientific reputation and won him a place with an expedition to the copper mines around Lake Superior which was led by General Lewis Cass.  He wrote of this expedition in Narrative Journal of Travels through the Northwestern Regions of the United States … to the Mississippi River (1821). Schoolcraft's travels in what was the northwestern part of the United States is a classic travel narrative. He provides details on the various Indian tribes, topography, geography, geology and mineral deposits observed.