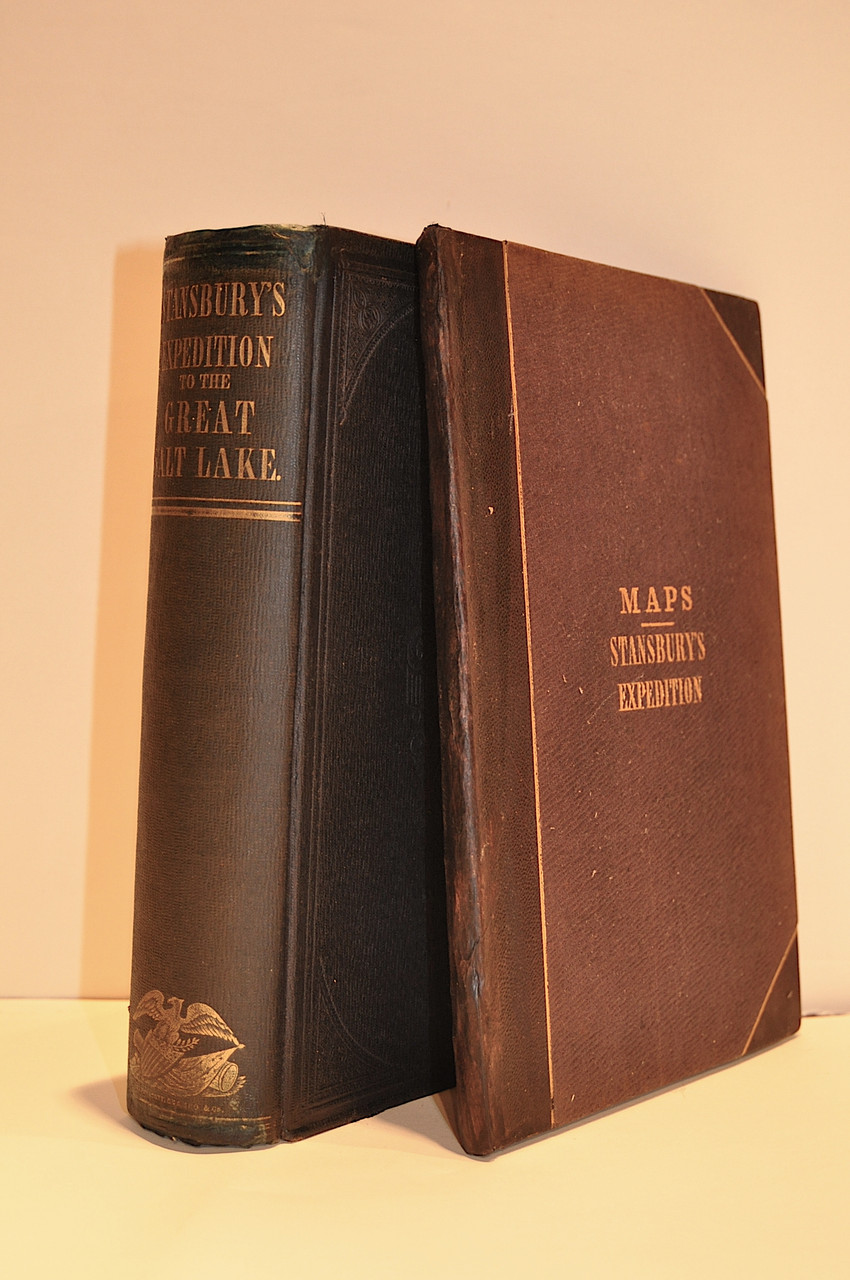 Product Description
Stansbury, Howard; Exploration and Survey of the Valley of The Great Salt Lake of Utah; including a Reconnoissance of A New Route Through The Rocky Mountains. Text and atlas. Senate Executive Doc. 3. Philadelphia, PA: Lippincott, Gambo & Co, 1852. Large octavo, pp. 487, tinted frontispiece, and 57 additional plates, some tinted and some folded. Atlas with two large folded maps being “Map of the Great Salt Lake” measuring 44.5" by 31.5". and “Map of a Reconnoissance between Fort Leavenworth on the Missouri River, and the Great Salt Lake in the Territory Of Utah,” measuring 71" by 168”.
The set is complete with the rare atlas present. The text is in the original blind stamped dark brown cloth with gilt spine titles. The binding is tight and clean, gilt titles are bright. Minor bumping to corners and light shelf scuffing. The text and plates are bright and clean. Small book plate of James H. Whiteman in upper left corner of paste down. In very good condition. The atlas is in the original two tone dark brown cloth with gilt cover titles. The binding is tight and clean, light matching restoration to spine, titles are bright. The maps are very clean with only light toning to folds. A very good set.
Howard Stansbury (1806-1863) was a civil engineer and Army officer. He was granted a commission as a First Lieutenant  in the newly formed Army Corps of Topographic Engineers. In 1849 he was appointed to lead an expedition from Fort Leavenworth to the valley of the Great Salt Lake. He was to map all immigrant routes as well as the Oregon Trail and upon arrival map the Great Salt Lake and its valley as well as the Utah Valley. Stansbury was assisted in this task by Lt. J. W. Gunnison. The resulting report received high praise. The report provided the outside world with a thorough and objective look at the Mormons and their settlement as well as a detailed and scientific appraisal of the natural resources, fauna and flora of the region.

Langworthy, Franklin; Scenery of the Plains, Mountains, and Mines: or a Diary kept upon the Overland Route to California, by Way of the Great Salt Lake: Travels in the Cities, Mines..1855