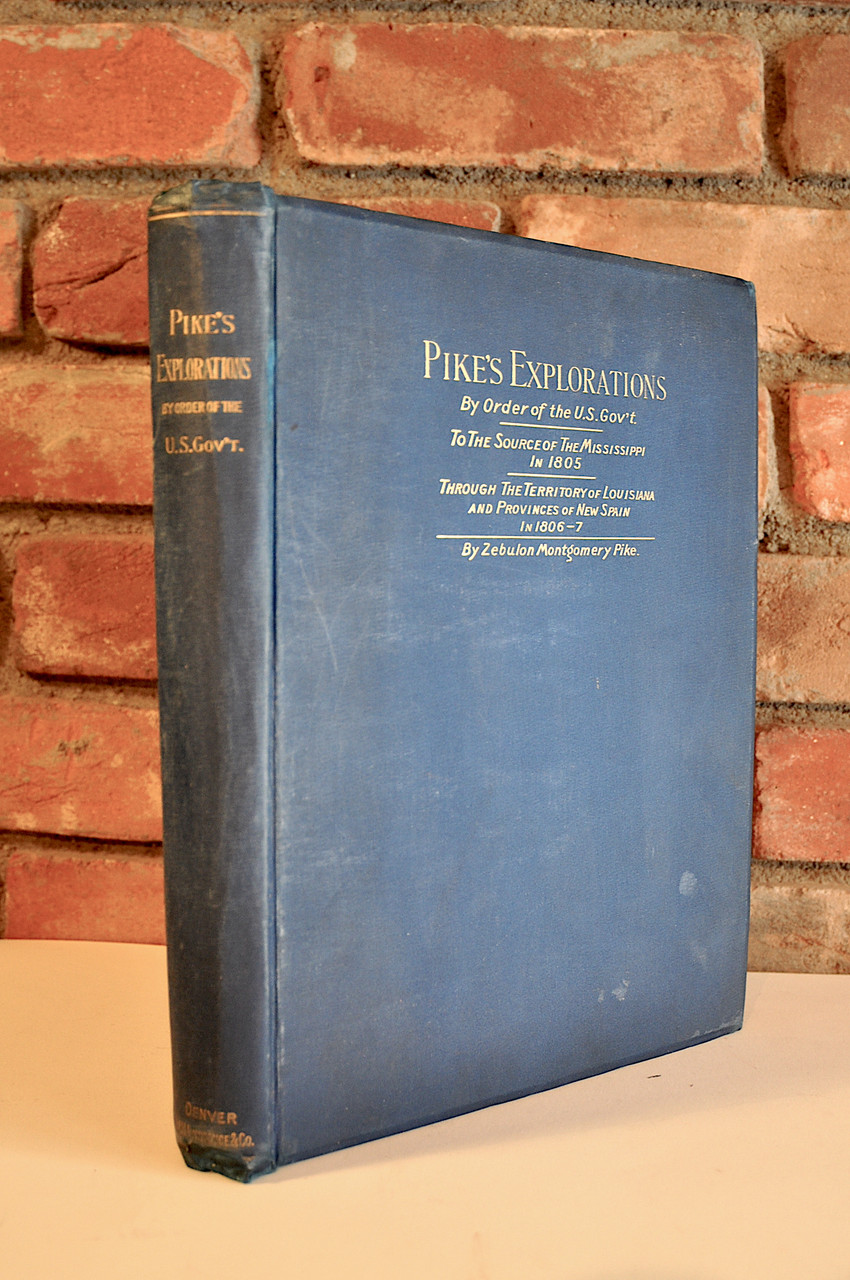 Product Description
Pike, Zebulon Montgomery; Pike's Explorations; Exploratory Travels Through the Western Territories of North America: Comprising a Voyage From St. Louis, on the Mississippi, to the Source of That River, and a Journey Through the Interior of Louisiana, and the North-Eastern Provinces. Denver, CO: W.H. Lawrence & Co, 1889. Large quarto, pp. xxiv, 394, Illustrated with frontispiece, charts, tables, and 4 maps. The 1889 reprint of the superior London edition of 1811.
The work is complete and in the original blue cloth with gilt cover and spine titles. The binding is tight and clean. Front end sheet has been expertly reattached, text and maps are clean, text block has not been trimmed. In very good condition
Zebulon M. Pike (1779-1813) was an American Army officer for whom Pike’s Peak in Colorado is named.
The Louisiana Purchase was one of President Thomas Jefferson's major achievements, and in the following four years he commissioned a number of expeditions to explore the largely unknown territory. In 1805 Pike; then an army lieutenant, led a 20-man exploring party to the headwaters of the area he believed to be the headwaters of the Mississippi River with instructions to discover the river’s source, negotiate peace treaties with Indian tribes, and assert the legal claim of the United States to the area. Pike traveled 2,000 miles by boat and on foot from St. Louis, Missouri, to Leech and Sandy lakes, in northern Minnesota. He erroneously identified Leech Lake as the river’s source.

Then in July 1806 Pike was dispatched to the Southwest to explore the Arkansas and Red Rivers and to obtain information about the bordering Spanish territory of New Spain. Pike established an outpost near the site of present-day Pueblo, Colorado, and then led his party northwest, where they encountered Front Range of the Rocky Mountains.  After trying unsuccessfully to scale a mountain peak later named for Pike, the party proceeded southward to northern New Mexico where they were apprehended by Spanish officials on the charge of illegal entry into New Mexico. They were escorted across Texas to the Spanish–American border at Natchitoches, Louisiana, where on July 1, 1807, they were released. Pike’s report on Santa Fe with information noting particularly the military weakness of the capital and the lucrativeness of the overland trade with Mexico, stimulated the expansionist movement into Texas. Pike served in the War of 1812 attaining the rank of Brigadier General. He was killed in action during the attack on York (present day Toronto).  Among the significant westward expeditions, that of Lieutenant Zebulon Montgomery Pike ranks with that of Lewis and Clark. While Pike’s expedition was not the first official reconnaissance of the west, he provided some of the earliest official geographical images of parts of the west. His map and journal provided the first authentic information about the Upper Mississippi. On the Conejos River, an effluent of the Rio Grande, well within Spanish territory, Pike constructed a fort. It was at this fort that he was arrested and taken first to Santa Fe and then to Chihuahua for a meeting with Don Nemesio Salcedo, the governor of New Spain. Although his maps were confiscated Pike kept his transverse tables hidden and these tables enabled him to reconstruct parts of the upper Arkansas, and to his credit, his map is the first to accurately delineate the Arkansas River and its tributaries. Pike published the journals of his explorations in 1810, supplemented with his correspondence with General Wilkinson, his speeches to the Indians, and detailed descriptions of the land through which he traveled, as An Account of Expeditions to the Sources of the Mississippi and through the Western Parts of Louisiana. Appearing as it did, four years before the publication of the journals of Lewis and Clark, Pike's book provided the American public with its first written description of the trans-Mississippi West.