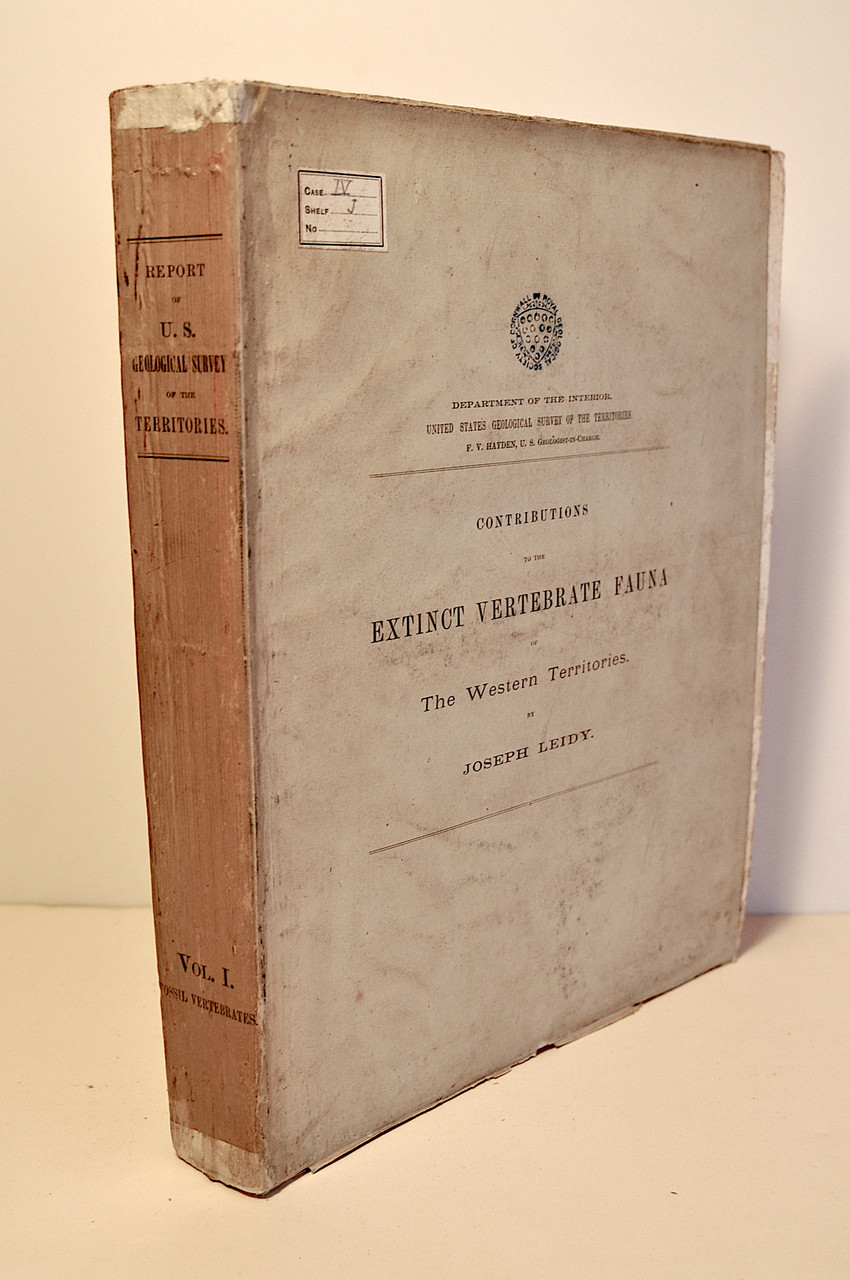 The work is complete and in the original stiff paper title wraps. The text is uncut, small stamp of Cornwall Geo. Soc. On cover. Binding is tight and clean with minor restoration at upper spine, text and all plates clean and bright. In very good condition.

Joseph Leidy, (1823-1891) was born in Philadelphia and died in the same city. He was educated as a physician and naturalist and made important contributions throughout his life to the fields of medicine, comparative anatomy, parasitology and paleontology.
Soon after his appointment as librarian and curator at the Philadelphia Academy of Natural Sciences (1846) he was to become the head of the Board of Curators. Leidy made extensive studies of fossil deposits in the western states. The first of his many works on the subject, “On the Fossil Horse of America” (1847), showed that the horse had lived and become extinct on the North American continent long before the arrival of Columbus. He subsequently proved the prehistoric presence in the western United States of the lion, tiger, camel, and rhinoceros.
Leidy was also the first individual to recognize dinosaur remains in North America. In 1856, Leidy identified some teeth that had been discovered by Ferdinand Hayden in the Nebraska Territory; he named three of the new genera Trachodon, Troodon, and Deinodon, all of which are dinosaurs. Leidy  understood what they were, as he pointed out that Trachodon teeth were similar to those of Iguanodon (the second dinosaur discovered, in England, by Gideon Mantell), and Deinodon resembled Megalosaurus, the first dinosaur discovered, described in 1824 by William Buckland.
Two years later, in 1858, the partial remains of a large dinosaur were discovered in Haddonfield, New Jersey, and presented to the Academy. Leidy described the fossils and named the animal Hadrosaurus. He pointed out that, because of its large hind limbs and smaller forelimbs, Hadrosaurus probably moved more like a kangaroo that a lizard. This was the first suggestion that some dinosaurs might not have been quadrupeds, as they had been modeled by Benjamin Waterhouse Hawkins at Sydenham Park near London a few years before. Leidy published his finds in two volumes of the Proceedings of the Academy.
Leidy was also the chief authority of his time on protozoa. He published several works on the subject. One, Fresh Water Rhizopods of North America (1879), became a standard work. In all, he published more than 600 works. “On the Extinct Mammalia of Dakota and Nebraska” (1869), was described by the prominent American paleontologist Henry Osborn as possibly the most important paleontological work produced in the United States.