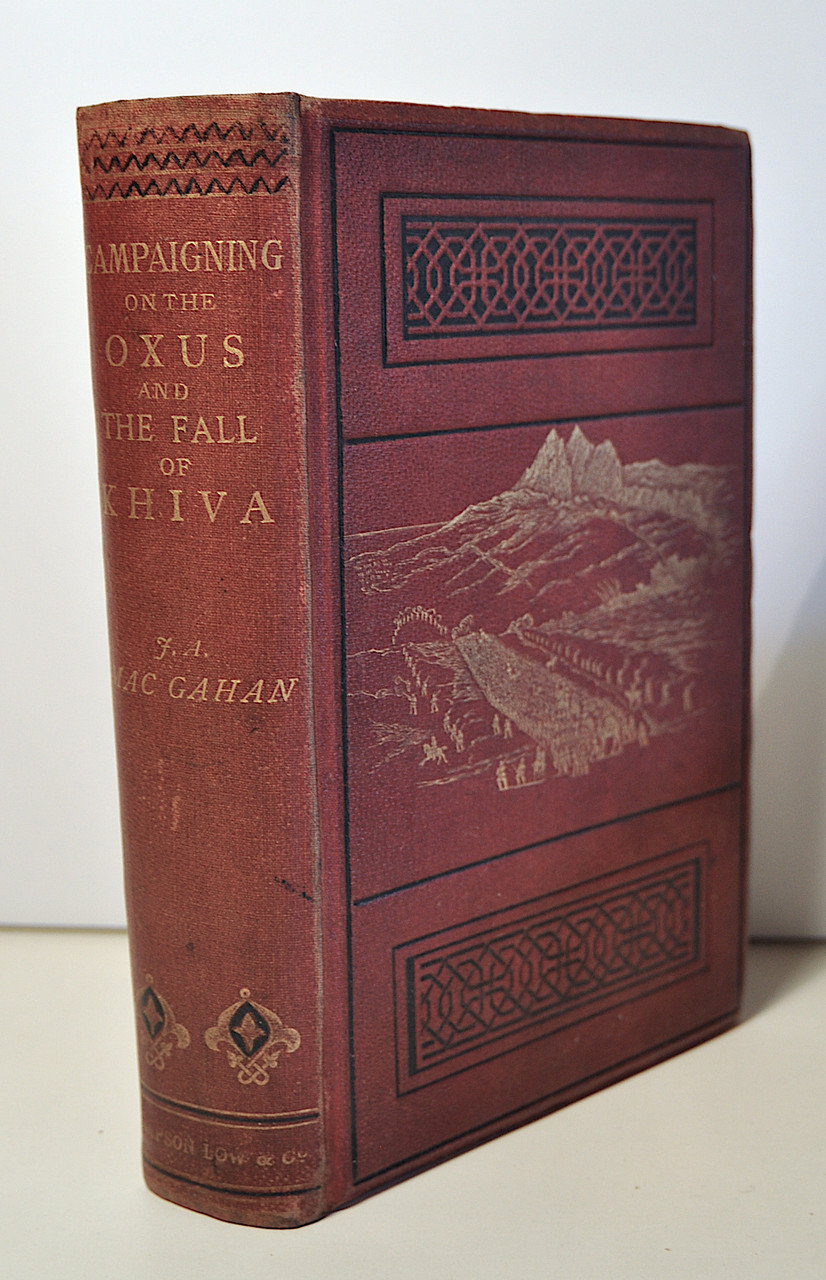 Product Description
MacGahan; Januarius Aloysius; Campaigning on the Oxus, and the Fall of Khiva. London, Sampson Low, Marston, Low & Seattle, 1874. Octavo, pp. x, 440, frontispiece, title page with vignette, folded double page tinted map, 30 additional full and partial page illustrations, 48 pages of ads.
The work is complete and in the original rust colored pebbled cloth with ruled borders, bevelled edges, decorative covers with pictorial gilt vignette, ruled panels and decorative spine panels, black end sheets  The binding is tight and exceptionally clean with minor shelf wear to binding edges, the text and plates are very clean and bright. Private owner’s small book plate on front paste down. An exceptionally beautiful copy of the London 1st printing of the 1st edition.
Januarius Aloysius MacGahan (1844-1878) was an American journalist and war correspondent working for the New York Herald and the London Daily News in the London office. After covering the Franco-Russian War he was assigned to the St. Petersburg office in 1871. In 1873 he learned that Russia was planning to invade the khanate of Khiva in Central Asia. He defied a ban on foreign journalists to cover the invasion and was present at the surrender of the city of Khiva to the Russian army. This led to his long lasting friendship with several prominent Russian officers and diplomats. Those friendships allowed him to cover the events leading to the Russo-Turkish War of 1878-79.
He is best remembered for his numerous articles which provided an honest and detailed description of the massacre of Bulgarian civilians by Turkish military forces and mercenary volunteers. His reporting caused outrage across Europe and was a major factor in preventing England from supporting Turkey in the Russo-Turkish War of 1878-1879. Up to that time England had turned a blind eye to the behavior of Turkey. It was Russia and its Czar that came to the aid of the citizens of Bulgaria and that aid by Russia was the root cause of the 1878-79 war. The result of the war was the independence of Bulgaria from Turkey.
MacGahan described many of his experiences in the well received book “Campaigning on the Oxus, and the Fall of Khiva”. 1874.