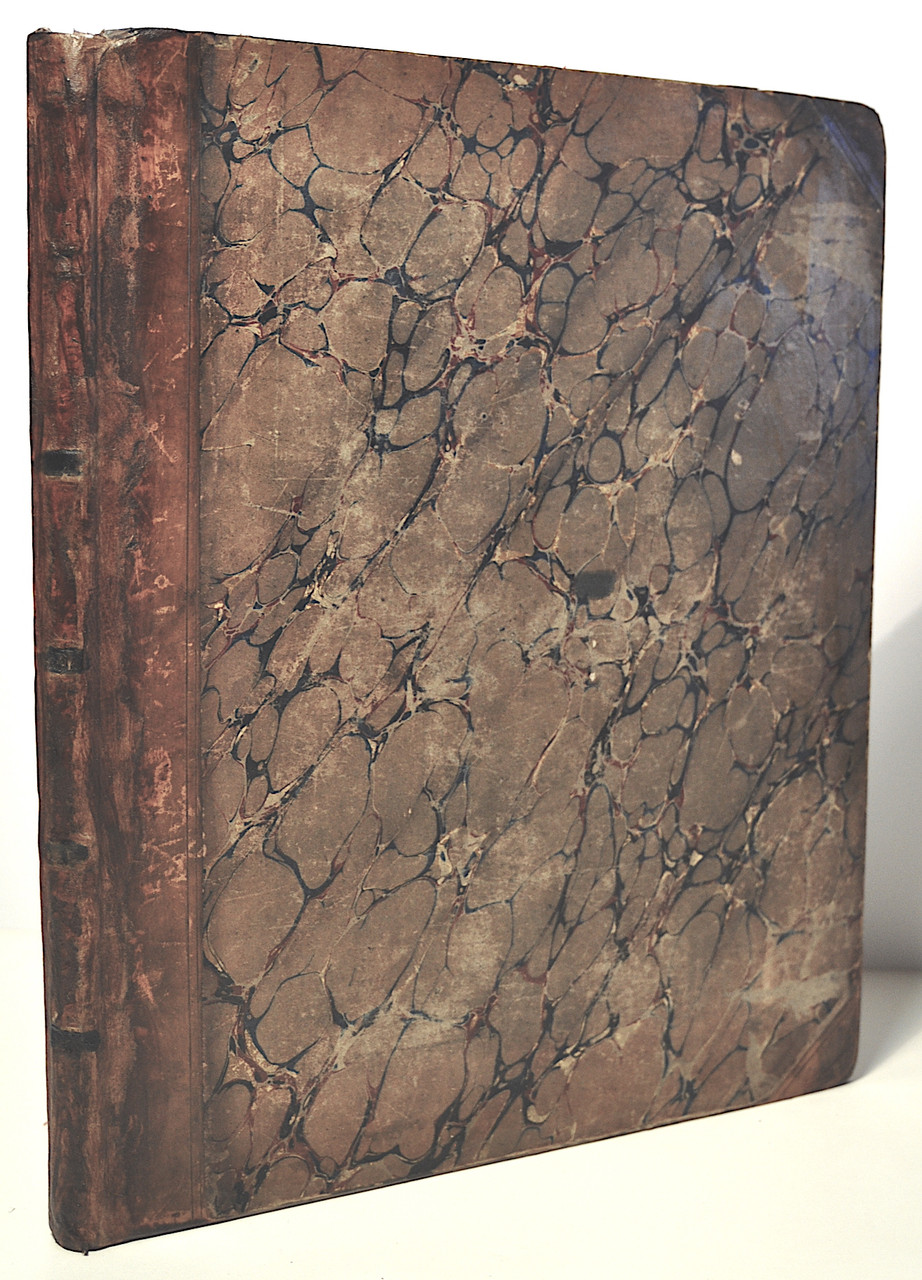 Product Description
Lamarck, Jean-Baptiste translated by Edmund A. Crouch;  An Illustrated Introduction to Lamarck's Conchology; contained in his Histoire Naturelle des Animaux sans Vertebres: being a literal translation of the descriptions of the recent and fossil genera. accompanied by twenty-two highly finished [coloured] lithographic plates: in which are given instructive views of the various genera, and their divisions, drawn from nature, from characteristic and generally well known species.  1st edition, 1st printing, London, John Mawe & Longman, Rees, Orme, Brown and Green, 1826.
Bound in contemporary calf and marbles boards, spine titles perished. Binding is tight,  inner hinges re-enforced, spine and margins restored. Armorial book plate of noted Scottish surgeon and mineral and fossil collector Dr Thomas Brown of Lanfine and Waterhaughs (1774-1853) with his signature above book plate. Later signature on free end sheet. Text and plates very clean. Binding in good+ condition, text and plates very good condition.
Jean-Baptists Lamarck (1744-1829) was a French naturalist. He was a soldier, biologist, and academic, and an early proponent of the idea that biological evolution occurred and proceeded in accordance with natural laws. Lamarck originally pursued a military career but an injury forced him to resign in 1768. He pursued his interest in botany and it was as a botanist that he first built his scientific reputation. Lamarck gained attention among the naturalists in Paris at the Jardin et Cabinet du Roi (the king’s garden and natural history collection, known informally as the Jardin du Roi) by claiming he could create a system for identifying the plants of France that would be more efficient than any system currently in existence, including that of the great Swedish naturalist Linnaeus. His ideas appealed to the French naturalist Buffon who was the director of the Jardin du Roi and Linnaeus’s greatest rival. Buffon arranged to have Lamarck’s proposed work published at government expense, and Lamarck received the proceeds from the sales. The work appeared in three volumes under the title 'Flora Francaise' in 1778. Lamarck was to continue to publish major works on Botany. Later in life Lamarck pursued other interest and began to classify invertebrates, especially shells. The shift in focus was appropriate, as Lamarck was also an ardent shell collector. Lamarck set out to classify this large and poorly analyzed part of the animal kingdom. Lamarck would name this group “animals without vertebrae” and invent the term invertebrate. By 1802 Lamarck had also introduced the term biology. Lamarck's continued studies of life forms and their classification led to his proposing the idea that life forms evolved through biological evolution. Lamarck stands out in the history of biology as the first writer to set forth; both systematically and in detail, a comprehensive theory of organic evolution that accounted for the successive production of all the different forms of life on Earth.
in the late 1790s, Lamarck took over the mollusk collection of the Paris Museum. After studying the collections which contained both fossil and recent mollusks, he found that many of the living species of mussels and other marine mollusks had similar features to fossil species. It was possible, in many cases, to arrange the fossils of the earlier and more recent Tertiary strata into a chronological series that led to a recent species. In some cases where the material was sufficiently complete, Lamarck was able to establish unbroken phyletic series. In some cases, he found that the recent species extended back into the Tertiary strata. He correctly concluded that many phyletic series had undergone a slow and gradual change throughout time. Lamarck's marine mullusk collections enabled him to reach such a conclusion.
Lamarck's works are noted for their beautifully illustrated plates which are often sold individually. The lithographer and writer Edmund Crouch translated the descriptions of the recent and fossil shells from Lamark's Histoire Natuelle des Animaux, and also prepared new illustrations of the recent and fossil shells from his own collection as well as the collections of Mawe, G. B. Sowerby, J. D. C. Sowerby and the British Museum. The work was published in part by the noted publisher and mineralogist and conchologist John Mawe (1764-1829).

Murchison, Roderick Impey; Siluria. The History of the Oldest Knoiwn Rocks Containing Organic Remains, with a brief Sketch of the Distribution of Gold over the Earth. 1st edition, London, John Murray, 1854.