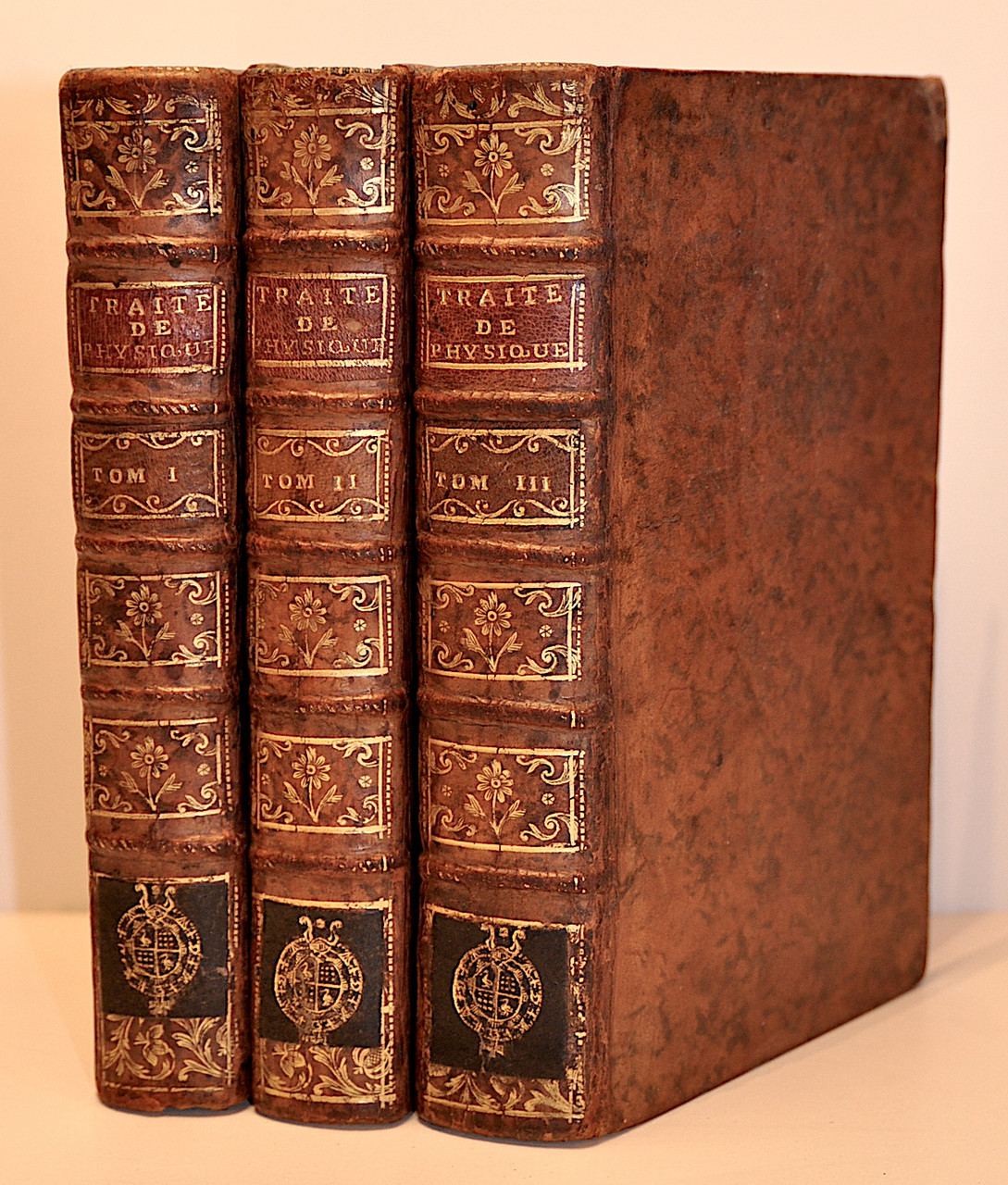 Product Description
Lehmann, Johann Gottlob;Traités De Physique, D'Histoire Naturelle, De Mineralogie Et De Métallurgie. Chez Thomas Herissant, A Paris 1759.
Octavo,  Vol 1, pp.  2 pgs, Half title, "Traités De Physique, D'Histoire Naturelle, De Mineralogie Et De Métallurgie"', Frontispiece,  2, Title page, xvi, 420, 4 additional plates, 1 table. Vol.2, pp. Half title, "Traités De Physique, D'Histoire Naturelle, De Mineralogie Et De Métallurgie", xvi, 404. Vol. 3, pp. Half title, "Traités De Physique, D'Histoire Naturelle, De Mineralogie Et De Métallurgie"', xxviii, 502, 6 plates (some folding).
The set is complete and in the original full  brown sheep with six decorative gilt spine panels and titles, marbled text block edges and marbled end sheets. The bindings are tight and clean with a small gilt ornate stamp in the lower spine panel of each volume. The text and plates are very clean and bright with a small private early ornamental stamp on the lower part of each title page. In very good condition.
Johann Gottlob Lehmann; (1719-1767) was a German mineralogist and geologist. He made many contributions to geology, metallurgy, mineralogy and chemistry, founded the Freiberg Bergakademie and is considered the founder of stratigraphy. Lehmann recognized that whatever the genetic processes might be that resulted in the formation of metals and metallic ores, there were certain environments which were more favorable to their development than others. He referred to these places as the "matrices" of the metals. He stated that metals do neither originate in the air, as believed by many of the older writers, nor in animals or plants, but in the earth's crust, in rocks, or in fossiliferous and other stones.
Lehmann recognized Steno's earlier work on strata and applied those principles to a better understanding of the geology of Saxony and eventually all of Prussia. He was the first to take his knowledge of stratigraphy and ore genesis and apply it to the structure of mountains. He recognized that two mountains could be similar in appearance but have very different structures. One could be a ore-bearing mountain with ore veins but no defined strata while the other mountain had defined strata of limestone and sandstone layers and contained fossils but had no ore veins. In 1756, he presented his studies in a book, 'Versuch einer Geschichte von Flötz-Gebürgen' (Attempt at a History of Stratified Mountains). Within this work, Lehmann showed how stratified layers of rocks are built up, and he identified over 30 rock formations and gave them names. His book disproved diluvialism, which postulated that rock strata had been deposited in one continuous sequence in the aftermath of the Great Flood, and Lehmann helped lay the foundation for the grand theories of the earth that would emerge thirty years later in the works of James Hutton and Abraham Werner. It was this work that earned Lehmann the title of founder of stratigraphy.
The important and rare work we offer is the translation by P.H.T. baron d'Holbach of a number of Lehmann's published works. Each volume has a half-title 'Traités de Physique, d'Histoire Naturelle, De Mineralogie et de Métallurgie' that describes the  contents of this extensive work. Volume one 'L'Art des Mines ou Introduction aux connoissances necessaires pour l'exploitation des Mines Metalliques.' begins by describing mines, mountains and rivers in general. This is followed by a discussion of mineralogy (pp. 35-226) with emphasis on economic metals. A treatise on "moufettes" and on the formation of mines follows.The final part of volume one contains translations of seven treatises on natural history that discuss the interior structure of the earth, volcanoes, mineral waters, natural history around Halberstadt, types of marbles, and copper minerals. Volume two 'Traité de la Formation des Metaux, et de leurs matrices ou Minieres' provides information on the formation of metals, on mines and their construction, Volume three, 'Essai d'une Histoire Naturelle de Couches de la Terre' focuses on geology, with discussions of the earth in general, and Lehmann's commentary on the theories of Woodward, Whiston, Burnet, Moro, etc., on mountains, and the relationship of metals and minerals to the mountains, and the causes of earthquakes.