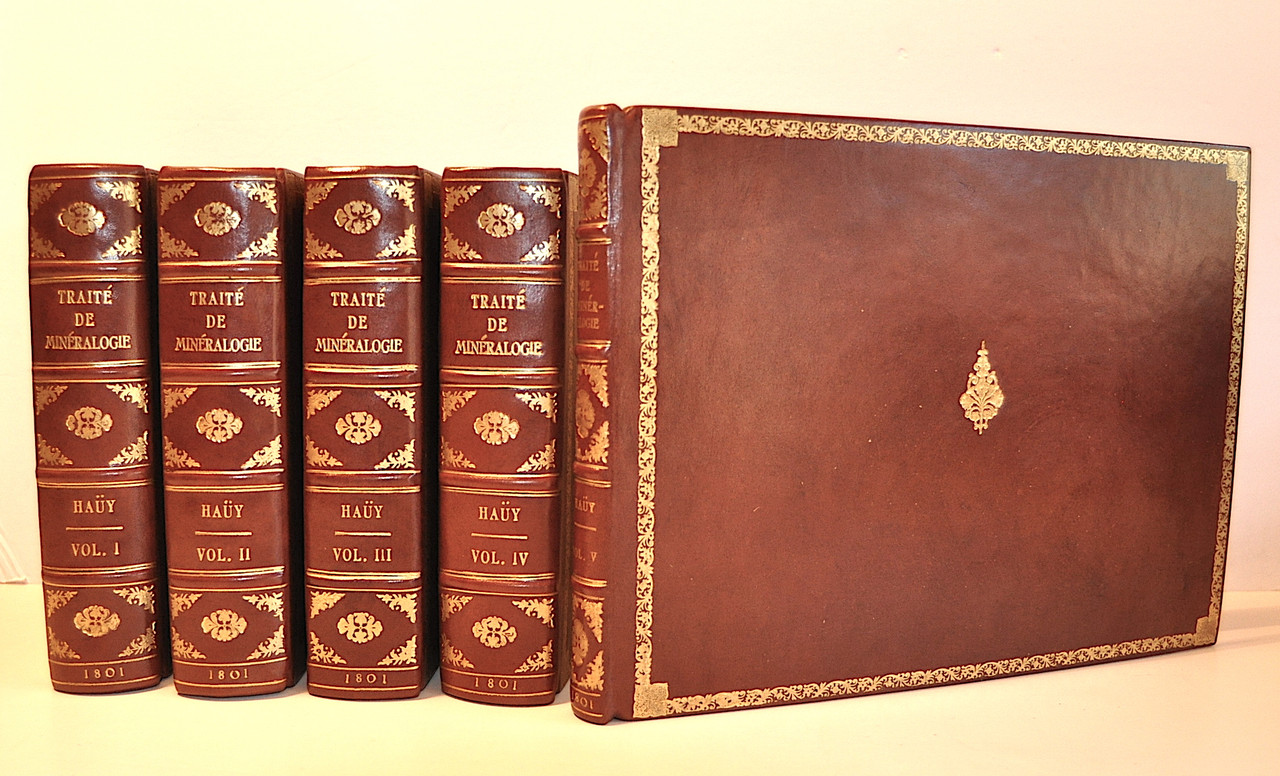 Product Description
Hauy, Rene Just; Traité de Minéralogie. 1st edition, De L'Imprimerie de Delance. A Paris, Chez Louis, Libraire, Rue de Savoye, N 12.,1801. Four vols. and atlas. Octavo, tome 1, half title, title, errata, lvi, 494. Tome 2, pp. half title, title, errata, 617. Tome 3, pp. half title, title, errata, 588. Tome 4, pp. half title, title, errata, 592. Atlas, oblong octavo, pp. title, 6, 10, 2, 86 engraved plates of mostly crystal drawings.
The set is complete and in a recent tooled full brown calf with gilt ruled borders, gilt titles, decorative gilt spine panels and boards with light red text block edges. The bindings are tight and in fine condition, the text pages are exceptionally clean, bright and crisp. The atlas is very clean with bright plates and only a very faint tide mark at the upper outer corner. Over all a very good set of the milestone work in mineralogy.
Hauy (1743-1822) was a French mineralogist and crystallographer and is considered the founder of modern crystallography. In 1770 he was ordained a priest and was assigned to a teaching position at the College Cardinal Lemoine. After attending Daubenton’s lectures on mineralogy he focused his studies and research to that subject. In 1794 he was to published his pioneering wrk “Essai dune Theory sur la Structure des Cristaux” and left teaching to focus strictly on mineralogical studies.
Hauy was arrested during the French Revolution but through the efforts of a former student Geoffrey Saint-Hilaire, he was released the night before the others in his group were executed. In 1795, he was appointed an instructor of physics and mineralogy at the École des Mines and then became professor of mineralogy at the Muséum d'Histoire Naturelle, where he also continued his research in mineralogy and greatly enlarged the mineral collection. In 1809, Haüy also assumed the chair of mineralogy at the Sorbonne. and retained the position until his death in 1822.
Hauy’s “Traite de Minéralogie”, 1801 is considered to be the most influential work written in mineralogy and crystallography. Within it, Hauy established a system of mineralogical classification and crystal structure and led future researchers to the laws of rational indices.
Within the work Hauy has made the science of crystallography the foundation of the determination of mineral species. His mathematical approach to presenting crystallographic facts provided for the first time an exact basis for mineralogy and the identification of mineral species.