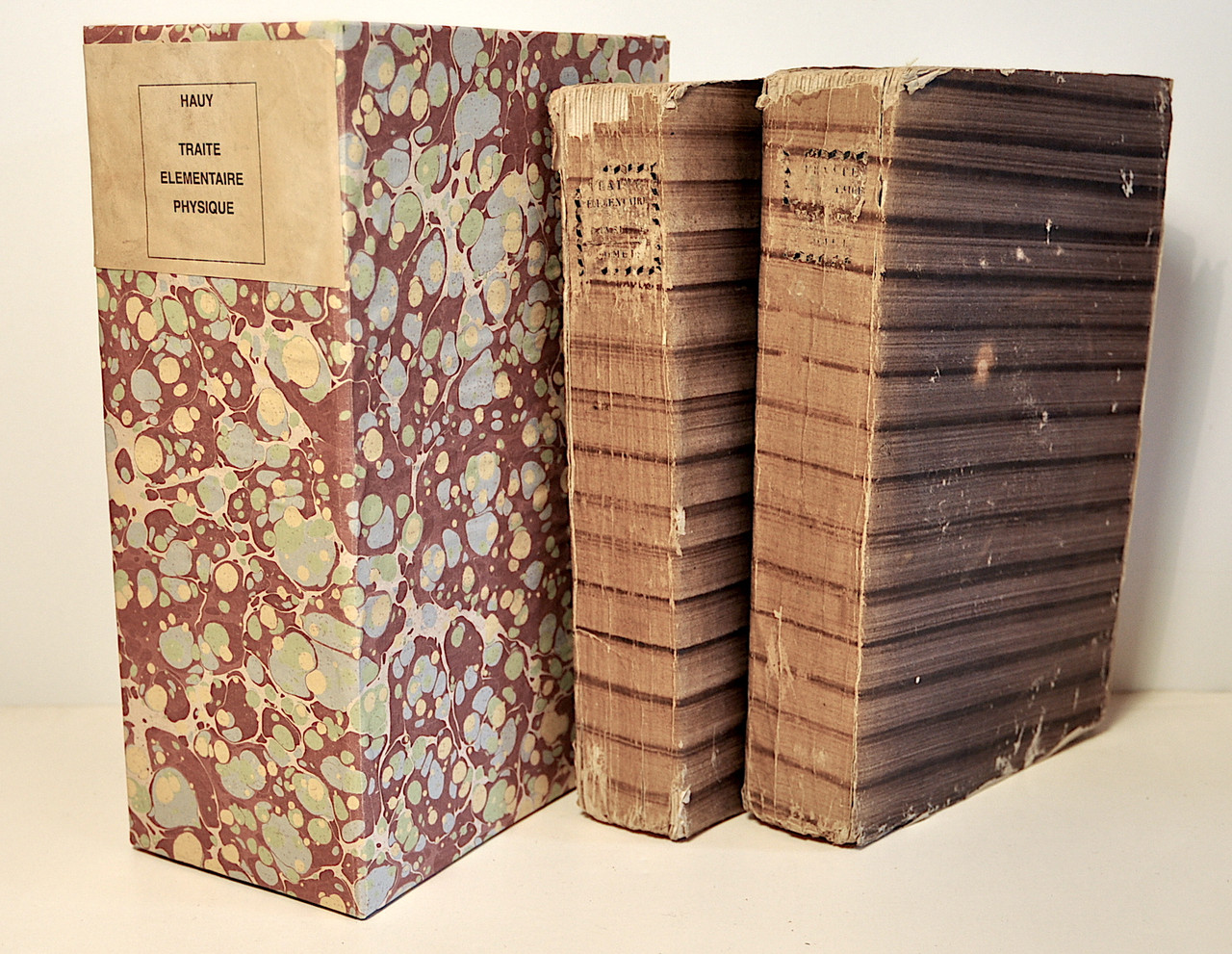 Product Description
Hauy, Rene Just; Traité Élémentaire De Physique, Seconde Edition, Tomes 1 & 2. Paris, Chez Courcier, Imprint-Libr. pour les Mathématiques, quai, des Augustins..1806. Octavo, time 1, pp. xxx,447, 3, 4 folded engraved plates. Tome 2, pp. 424, 2, 12 folded engraved plates.
The set is complete and in the original binders wraps with paper spine labels. Text is partially unit and never read. The wraps have light wear at edges, paper spine titles with scuffing. The text and plates are bright with no foxing or stains. The set is housed in an archival clamshell box. A very good set in original wraps.
Hauy (1743-1822) was a French mineralogist and crystallographer and is considered the founder of modern crystallography. In 1770 he was ordained a priest and was assigned to a teaching position at the College Cardinal Lemoine. After attending Daubenton’s lectures on mineralogy he focused his studies and research to that subject. In 1794 he was to published his pioneering wrk “Essai dune Theory sur la Structure des Cristaux” and left teaching to focus strictly on mineralogical studies.
Hauy was arrested during the French Revolution but through the efforts of a former student Geoffrey Saint-Hilaire, he was released the night before the others in his group were executed. In 1795, he was appointed an instructor of physics and mineralogy at the École des Mines and then became professor of mineralogy at the Muséum d'Histoire Naturelle, where he also continued his research in mineralogy and greatly enlarged the mineral collection. In 1809, Haüy also assumed the chair of mineralogy at the Sorbonne. and retained the position until his death in 1822.
Hauy also wrote on physics. Under Napoleon; in 1802, Hauy had been nominated as an honorary canon of Notre Dame. In 1803 Napoleon ordered him to write a textbook on physics for the new lycées which he titled “Traite de Physique”. The text was an immediate success and highly praised for its clear methodical approach to physics. It earned Hauy an appointment to the Legion of Honor in 1803. Hauy adhered to Newton’s corpuscular theory of light and to the theory that heat was caused by ‘caloric matter’. Hauy devoted discussions on his own research on double refraction in crystals, on pyroelectricity in tourmaline and boracite crystals, and on piezoelectricity and on magnetism. The work is divided into numerous sections with each covering a specific topic.