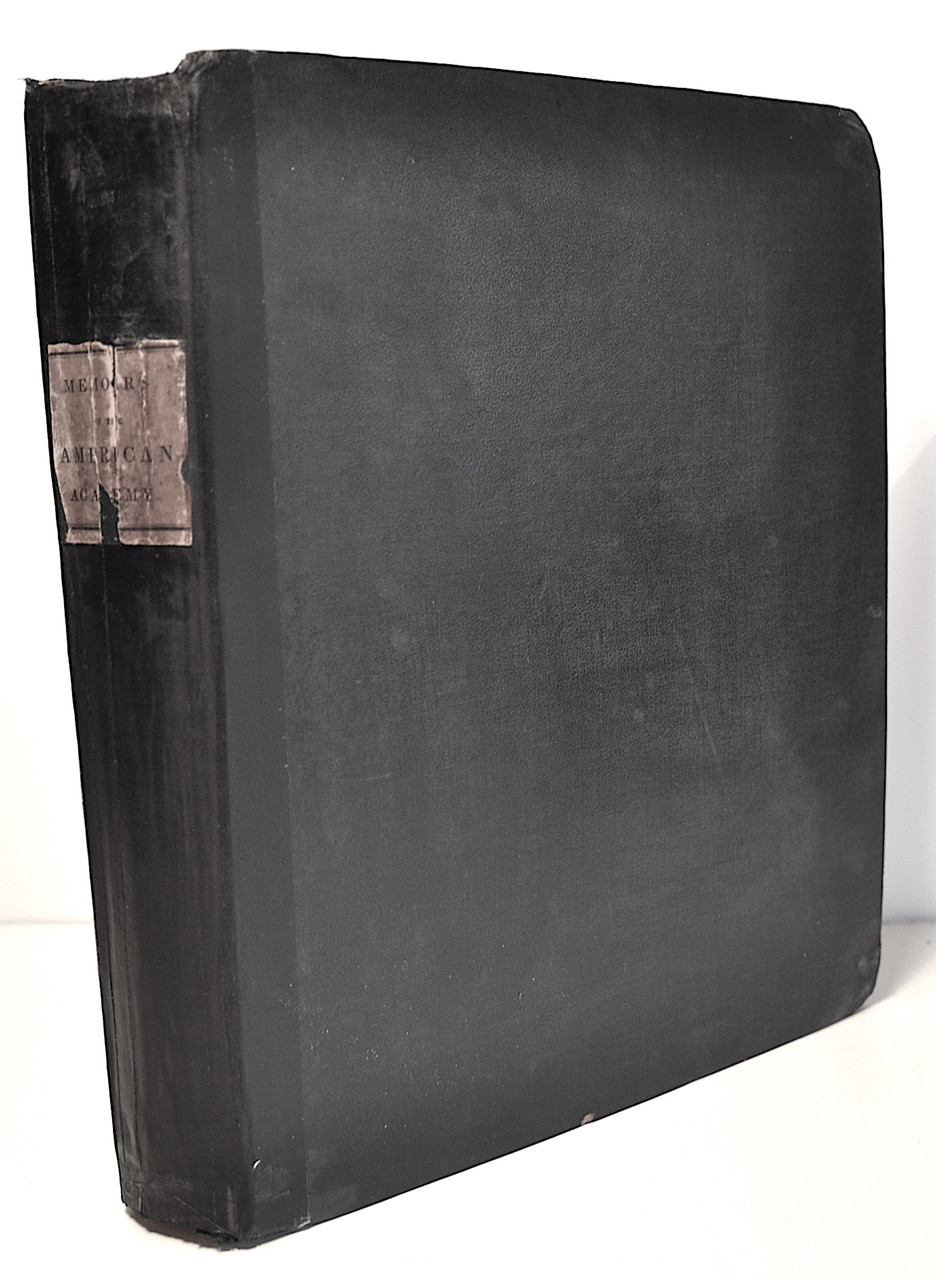 Product Description
Jackson, Charles T. & Alger, Francis; Remarks on the Mineralogy and Geology of Nova Scotia. (and other papers). American Academy of Arts and Sciences, New Series Vol. 1, Cambridge, 1833. Quarto, pp. xxxi, 595, 9 engraved plates (some folded) including the hand colored folded engraved geological map of Nova Scotia. The Jackson Alger paper is found on pages 217-329 and has the hand colored map  and four additional hand colored plates.
The volume is complete and in the original dark green boards with a black spine and paper spine label. The binding is tight, light wear to the boards nicely restored, bumped corners, chipping to the title label. The end sheets have light toning and light foxing. Front inner hinge tightened. The text and plates are very clean with minor age toning. In very good condition.
For the historian of geology and mineralogy the most important study in this volume of the transactions of the AAAS is by Charles Jackson and Francis Alger. The volume has several other important papers including notices on the death of John Adams and Thomas Jefferson. Two of the images included in this offering contain a list of all of the papers present in the volume. Our focus will be on the Nova Scotia study.
Jackson, (1805-1880); an American geologist, was the first State Geologist of Maine, Rhode Island and New Hampshire. Along with Alger he made some of the earliest studies of Nova Scotia's minerals and geology. In his various roles of state geologist, he was credited with several original investigations in paleontology, mineralogy and geology in New England. In addition Jackson consulted to numerous mine owners in the New England states and in 1863 consulted for the Manhan Silver Lead Mining Company near Loudville in Hampshire County, Massachusetts. The Manhan Mine was over 4000 feet in length and the largest and the most productive of the numerous lead mines and prospects in the area. The mine has been known for its wonderful mineral specimens which have been written on by many of America's most noted mineralogists and geologists including Benjamin Silliman, Amos Eaton, Edward Hitchcock, and Charles Shephard. As recently as 1999 the mine dumps continued to produce beautiful specimens.
Francis Alger (1807-1863) was an American mineralogist and industrialist. He came from a wealthy family in Boston and in 1856; after the death of his father, took over the business. All of his leisure time was devoted to collecting minerals and the study of mineralogy. From 1826 on he collected minerals in Nova Scotia and New England states, publishing the results of those studies in the American Journal of Science. His interest in mineralogy led to his meeting and working with Charles Jackson. Together they spent time in Nova Scotia studying the mineralogy and geology. This led to the publication of one of the earliest reports on the mineralogy and geology of parts of Nova Scotia.

Rare Geology Report by Jackson, Charles T.; First Annual Report on the Geology of the State of New Hampshire. Concord, 1841.