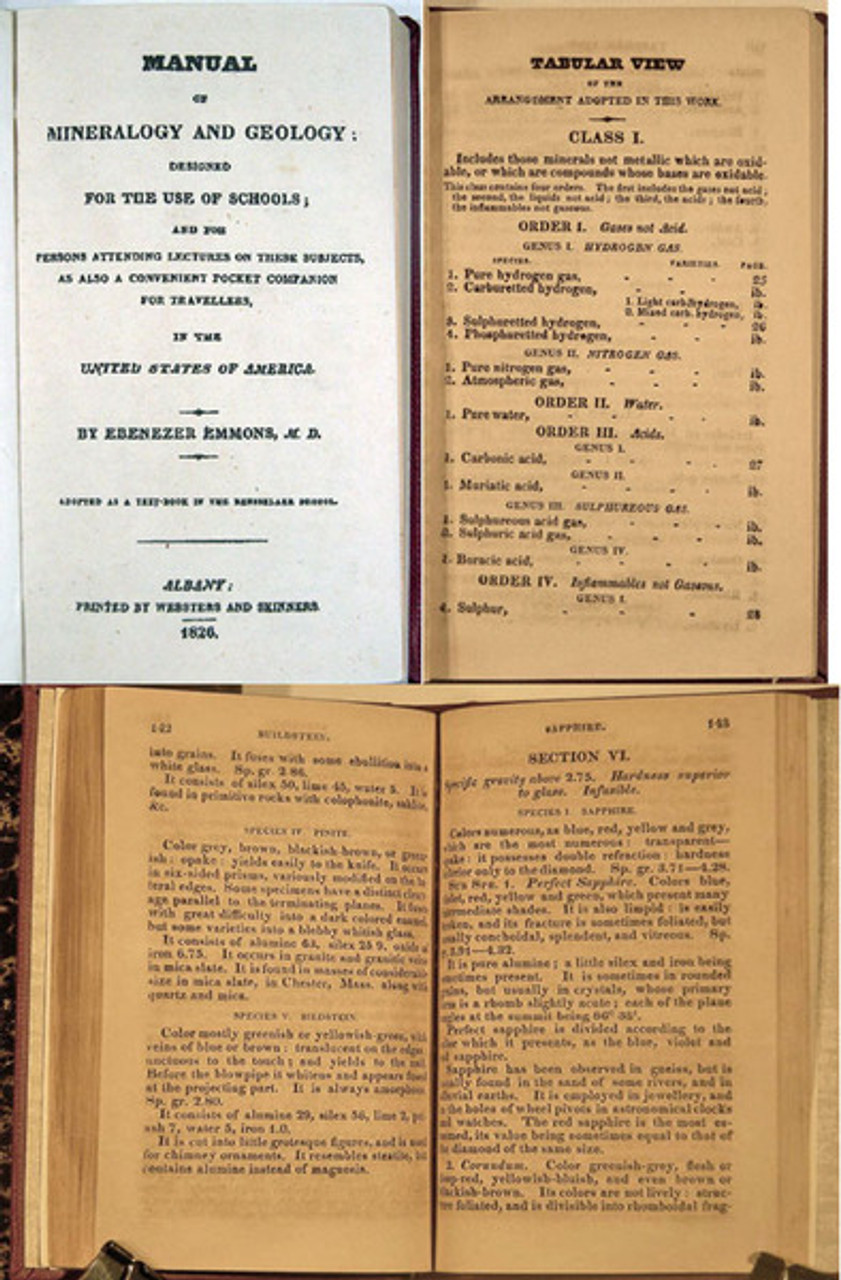 Emmons, Ebenezer; Manual of Mineralogy and Geology; designed for the use of schools; and for persons attending lectures on these subjects, as also a convenient pocket companion for travellers... Albany, Websters & Skinners, 1826. Octavo, pp. xxiii, 230.

In a later cloth binding with gilt title, binding is clean, text is clean with minor foxing. The title page is a near perfect facsimile on period paper. Owners book plate on paste down. Otherwise in very good condition.

Emmons studied science under Chester Dewey at Williams College and was a student of Amos Eaton at Albany Medical College. It was during his association with Dewey in preparing the 1824 geological map of the Berkshires that he first became interested in the geology and stratigraphy of northeastern New York and western Massachusetts. He practiced medicine in the Berkshires and continued to occasionally teach at Williams College up to his death. The above work was written by Emmons and adopted as a textbook in the Rensselaer school (RPI) and also at Williams College. It went through two editions the 2nd being in 1832.
The publication of Cleaveland’s treatise on mineralogy in 1816 and 1822 led to a demand for a short, much simpler work on descriptive mineralogy. The public and students were interested in a work small enough to be used in the field. Emmons “Manual” immediately satisfied that requirement and the first edition quickly sold out leading to the second edition of 1822.
In his book, Emmons adopts Mohs mineral classification but substitutes Brooke's system of crystallography. Since the intent is to provide a field manual, the individual mineral descriptions are clear and concise, giving the user ample general information and also stressing known mineral localities in the United States. Unfortunately, Emmon’s work was put to its intended use as a field manual and most copies of this book were undoubtedly destroyed making both this edition and the second edition quite rare.

Rare Mineralogy Books: Varley, Devalle; Rudimentary Treatise on Mineralogy; for the use of Beginners, 1849.