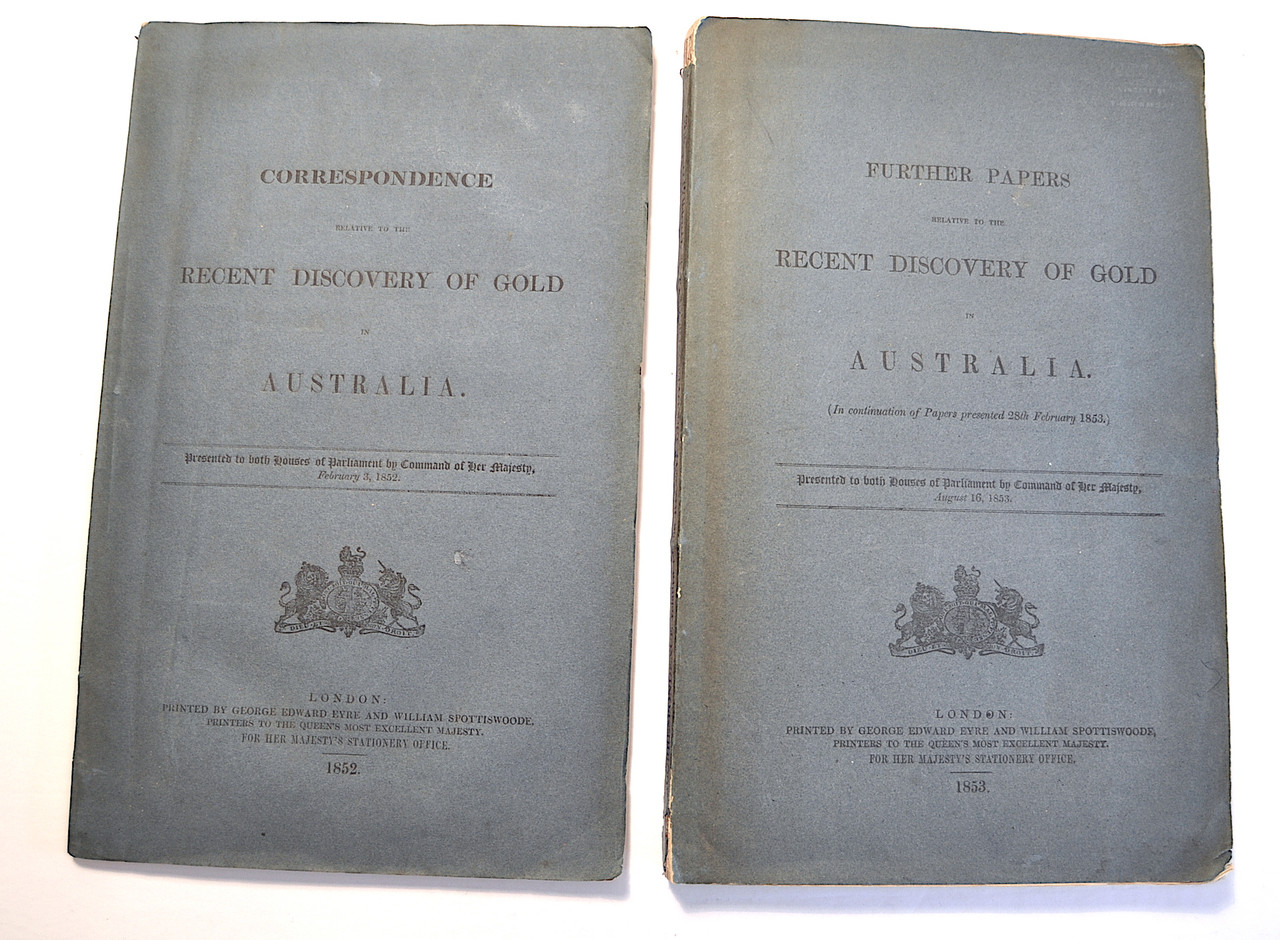 Both volumes are complete and in the original blue wraps with black titles and vignette on covers. Bindings are tight, light soiling and light wear to corners and upper and lower spine edges, rear outer corners of 1852 report’s rear cover torn away and repaired. Contents of both reports and map and profile are very clean and bright. Blind stamp of noted collector, writer and historian Sir Thomas Meek Ramsay (1907-1995) on title wrap of 1853 report. In very good condition.
The first significant gold discovery in Australia occurred in May 1851, after prospector Edward Hargraves claimed to have discovered payable gold near Orange, at a site he called Ophir.  Hargraves had been to the California goldfields where he had learned new gold prospecting techniques. Before the end of the year, the gold rush had spread to many other parts of the state where gold had been found, not just to the west, but also to the south and north of Sydney.
By July 1851, Victoria's first gold rush had begun on the Clunes goldfield. In August, the gold rush had spread to include the goldfield at Buninyong (today a suburb of Ballarat) and, by early September 1851, to the nearby goldfield at Ballarat (then known as Yuille's Diggings). This was followed in early September by the goldfield at Castlemaine (then known as Forest Creek and the Mount Alexander Goldfield and the goldfield at Bendigo (then known as Bendigo Creek) in November 1851. Gold, just as in New South Wales, was also found in many other parts of the state. Looking ahead two years in 1854 the Victorian Gold Discovery Committee wrote:
"The discovery of the Victorian Goldfields has converted a remote dependency into a country of world wide fame; it has attracted a population, extraordinary in number, with unprecedented rapidity; it has enhanced the value of property to an enormous extent; it has made this the richest country in the world; and, in less than three years, it has done for this colony the work of an age, and made its impulses felt in the most distant regions of the earth".
When the rush began at Ballarat in 1851, diggers soon realized it was a prosperous goldfield. Lieutenant-Governor, Charles La Trobe visited the site and watched five men uncover 136 ounces of gold in one day. Mount Alexander was even richer than Ballarat. With gold sitting just under the surface, the shallowness allowed diggers to easily unearth gold nuggets. In 7 months, 2.4 million pounds of gold was transported from Mount Alexander to nearby depositories.
The gold rush caused a huge influx of people from overseas. Australia's total population more than tripled from 430,000 in 1851 to 1.7 million in 1871.  Between 1852 and 1860, 290,000 people migrated to Victoria from the British Isles, 15,000 came from other European countries, and 18,000 emigrated from the United States. Non-European immigrants, however, were unwelcome, especially the Chinese.
This very rare volume of dispatches and reports on the newly discovered gold fields in New South Wales contains a wealth of information on the geology, stratigraphy, mineralogy, development of the first deposits, growth of the region, expansion into other areas, attempts to control immigration and other reports. The reports also contain a wealth of information on  returns and memos detailing the history of the discovery of gold in Victoria, including documents that record the dates and locations of the finds, the number of licenses issued, the quantity and value of the finds. There are also documents recording the incidental consequences of the finds, including the number of immigrants to Victoria drawn there by the gold, the number of extra Government Commissioners and Police required to maintain order, and details of the gold escort system that took the gold from the fields to the treasury in Melbourne.

Bakewell, Robert; Travels, comprising observations made during a residence in the Tarentaise, and various parts of the Grecian and Pennine Alps and in Switzerland and Auvergne in the years 1820, 1821, and 1822.