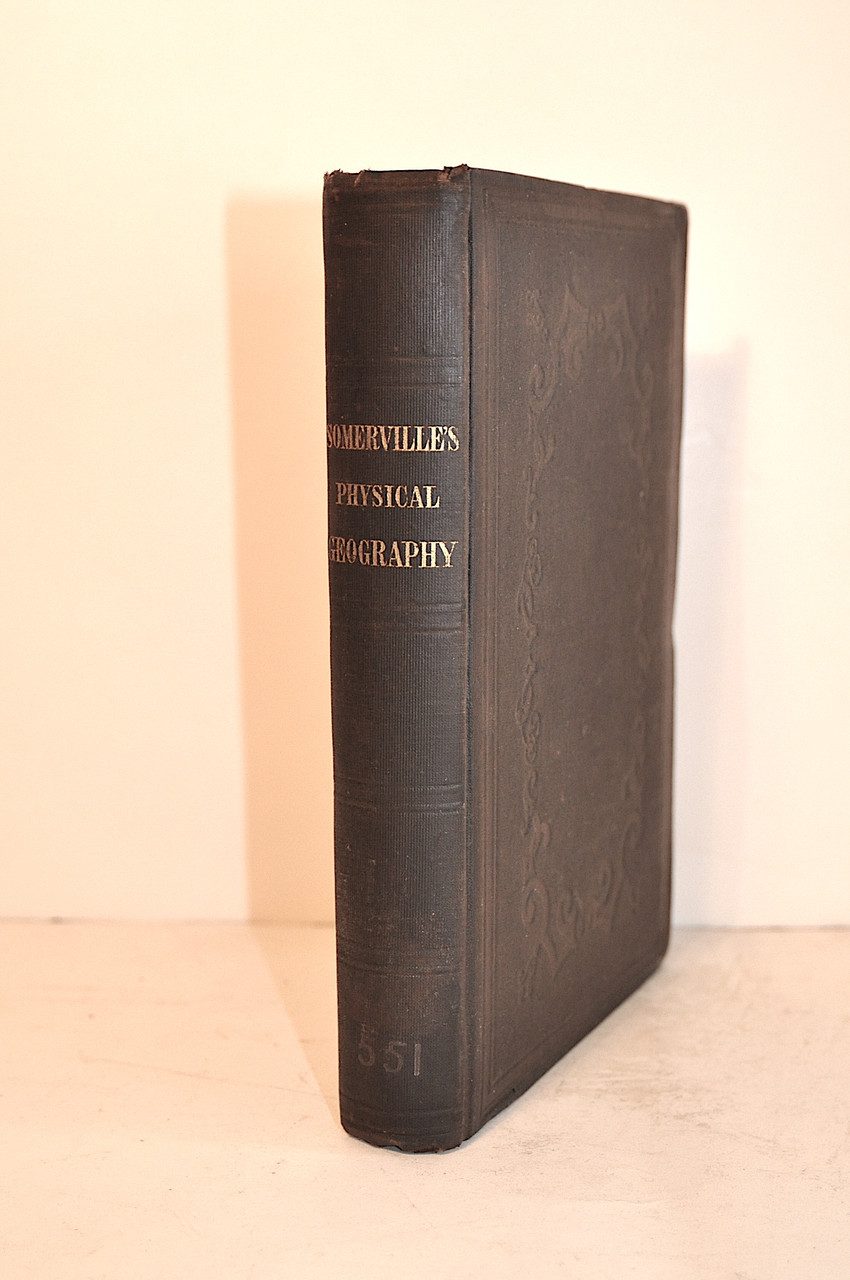 Product Description
Somerville, Mary; Physical Geography. Philadelphia, Lea and Blanchard, 1848. Octavo, pp. 381, 1, 20 pages ads.
The work is complete and in the original brown cloth with gilt titles. The binding is tight and very clean, minor corner bumping to boards, the text is exceptionally clean, with a private catalog number inked out on pastedown and a couple of neatly penciled course notes to rear end sheet. One blank end sheet in front removed. In very good condition.
Mary Somerville (1780-1872) was a self-educated Scottish scientist, and writer. Historians consider her to be the first woman scientist in English history as well as the first English geographer for she wrote the first formal textbook in physical geography in the English language. Her work “Physical Geography was published three years after von Humboldt’s Cosmos. This was before geography was recognized as a university discipline in Great Britain. Geography was not formally accepted as a field of study until 1887 when the Royal Geographical Society offered grants to both Oxford and Cambridge to help pay for stipends of lecturers. What is even more remarkable is Somerville was self-taught and yet published four highly recognized works in various scientific fields. She was close friends with Alexander von Humboldt, Roderick Murchison, Charles Lyell and John Herschel. All accepted her not only as a friend but also as a fellow scientist and acknowledged her contributions to science. Somerville was nominated along with Caroline Herschel to be the first female members of the Royal Astronomical Society. When the economist John Stuart Mill organized the massive petition to give women the right to vote in England he had Somerville’s signature first on the petition. She is featured on the verso of the Royal Bank of Scotland note issued in 2017.
Her book Physical Geography was published in 1848 and was the first English textbook on the subject. It appears to have been published both in London and Philadelphia at the same time. It remained in use as textbook until the early 20th century. At the time of publication it was financially very successful and earned Somerville the Victoria Gold Medal of the Royal Geographical Society Somerville followed, as she said, "the noble example of Baron Humboldt the patriarch of physical geography", and she took an extended view of geography that included the earth, its animal, "vegetable inhabitants", as well as "the past and present condition of man, the origin, manners, and languages of existing nations, and the monuments of those that have been".
Physical Geography starts with describing the overall structure of planet earth, and a brief description of the location of the earth within the solar system. Then the book focuses on terrestrial topics, such as the most basic features of land and water, and formations such as mountains, volcanoes, oceans, rivers and lakes. Somerville goes on to discuss the elements that govern temperature, such as light, electricity, storms, the aurora and magnetism. Eventually the book turns to vegetation, birds and mammals, and their geographical distribution on the planet in the Arctic, Europe, Asia, Africa, America and the Antarctic. Somerville ends the book with a discussion of "the distribution, condition, and future prospects of the human race". Physical Geography sold more copies than any of her other books and earned Humboldt's admiration. After receiving a copy of the book he wrote to Somerville: "You alone could provide your literature with an original cosmological work”.