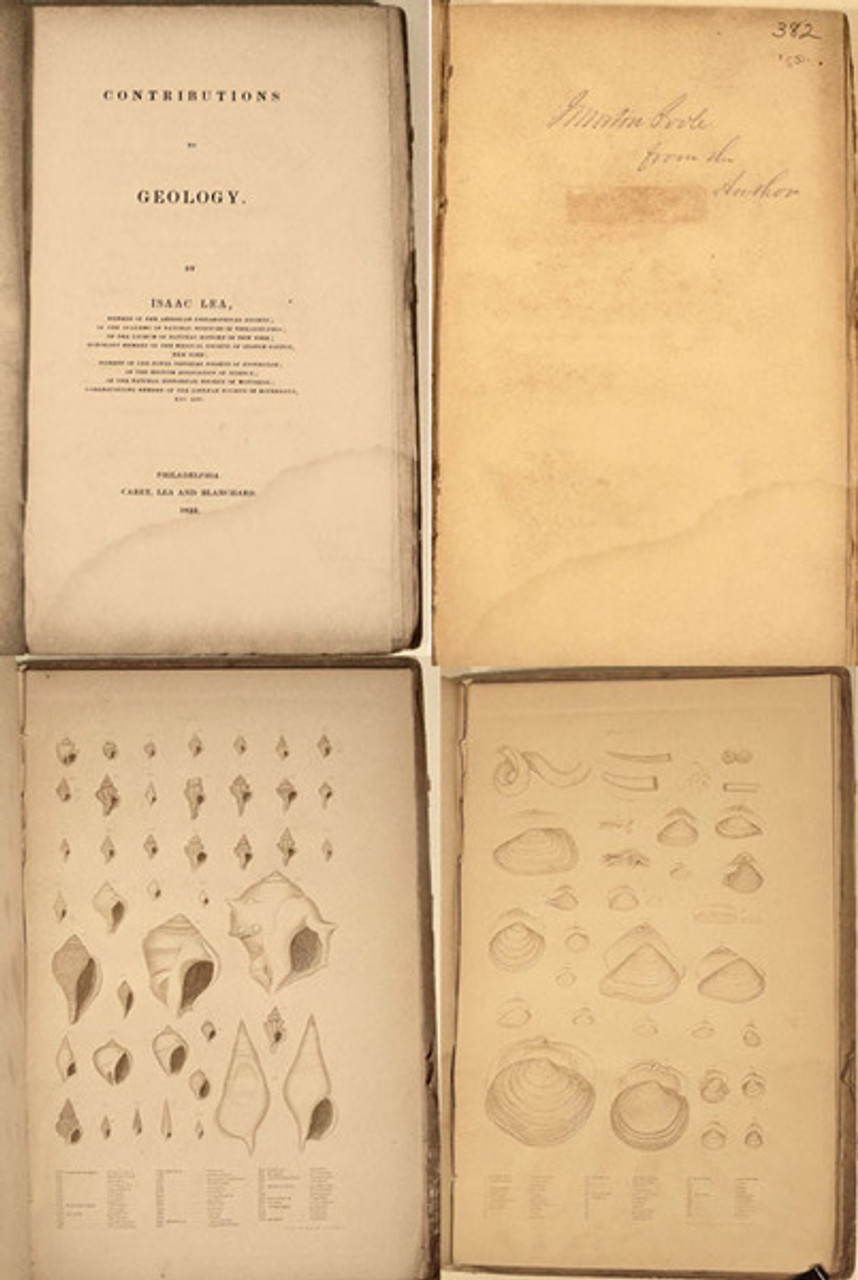 The work is complete and in the original boards with a recent spine and inked titles. The binding is tight and clean, light damp stain to lower third of text, inscribed by the author on the first end sheet. In good condition. Rare in first printing.

saac Lea; an American naturalist, was born in Wilmington, Delaware, 4 March, 1792; and died in Philadelphia, Pennsylvania, 8 December, 1886, In 1815 he was elected a member of the Academy of natural sciences in Philadelphia, and soon afterward published an account of the minerals that he had observed in the vicinity of Philadelphia. This was his first paper, and appeared in the "Journal of the Academy." Lea received the degree of LL.D. from Harvard in 1852, and was a member of many scientific societies in the United States and Europe. He was elected president of the Philadelphia Academy of Natural Sciences in 1858, and of the American Association for the Advancement of Science in 1860. The number of new forms, recent and fossil, that were made known by Lea amount to nearly 2,000. These descriptions he communicated to the Academy of Natural Sciences in Philadelphia. His collection of fresh-water shells, marine and land shells, minerals, fossils, and geological specimens were bequeathed to the National museum in Washington, on condition that a room be devoted exclusively to them and the whole called the "Isaac Lea Collection." The majority of his time was devoted to science, and in 1825 he began a series of studies on new forms of fresh-water and land shells. This was a project which he maintained throughout his life. ?His Contributions to Geology offered here is the rare original printing of Lea's classic studies on newly described Tertiary fossils and formations of Alabama, New Jersey, New York and Maryland. The work contains: Tertiary Formations of Alabama; New Tertiary Fossil Shells from Maryland and New Jersey; New Genera of Fossil Shell from New Jersey; Tufaceous Lacustrine Formation of Syracuse, Onondoga County, New York. Lea's "Contributions to Geology" was the best illustrated paleontological work that had appeared in the United States up to this time.