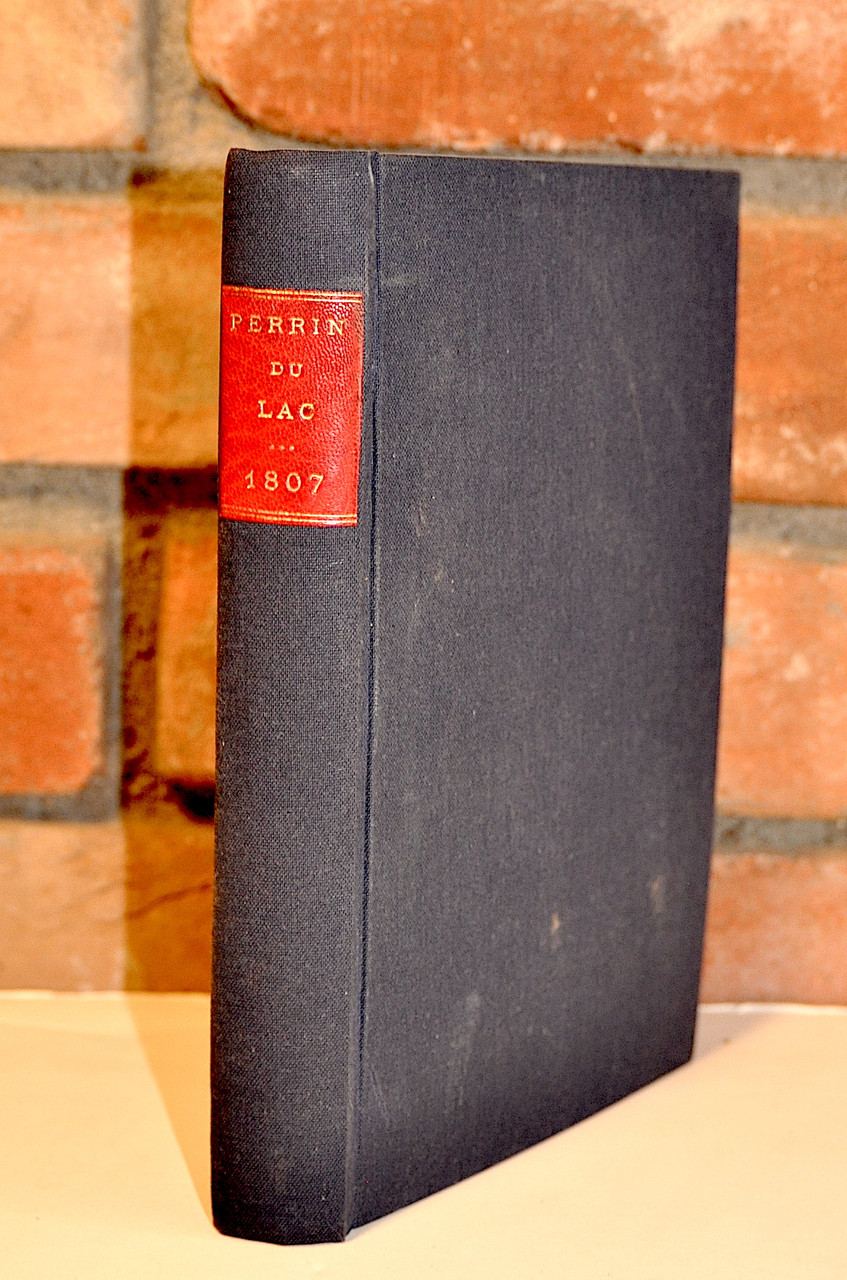 The work is complete and in a modern blue cloth with gilt spine label. The binding is tight and clean, text is clean with minor foxing, the folded map and plate are very clean with only minor foxing to margins. In very good condition.
Perrin du Lac (1766-1824) was a French naturalist and government official. He was born in Any-le-Duc. He was appointed as a financial administrator to Saint Domingue, Hispaniola (present day Haiti and Dominican Republic). When a revolution broke out between the colonists and French rule, Perrindu Lac sided with France against the colonists and accompanied French officials to the United States to appeal to Congress for help. Soon afterward he was prevented from returning to France because of the war between France and England. He decided to travel throughout parts of the United States and its territories including Pennsylvania, Maryland, Louisiana, Mississippi, Ohio, and Illinois. Some of the regions he claims to have explored remain in dispute by historians. The results of his travels were published in French in Lyon and Paris in 1805, in English in London in 1807 and a rare German edition in Wien also in 1807.
The resulting work is an important addition to Western Americana in which Perrin du Lac describes the fur trade with the various Indian tribes and the tribes along the Missouri River as far north as the White River of South Dakota as well as the geography along the route. The engraved map of the route has been described as "the earliest published map of the trans-Mississippi region which can be said to display even the faintest semblance of accuracy” (Wheat).
Of importance to the historian of geology and paleontology is the often overlooked engraved plate of the “mammoth” (mastodon) fossil on display in Philadelphia. At that time the mastodon fossil was the largest known terrestrial being found in North America. Its bones were discovered on a farm in Newburgh, New York in 1798. News of the discovery reached Philadelphia and the American naturalist and painter Charles W. Peale who was a close friend of Benjamin Franklin, Thomas Jefferson and George Washington quickly secured the site and excavated the rest of the fossil for transport to his museum in Philadelphia.  Some parts of the fossil disintegrated or were otherwise lost during the excavation. But Peale immediately began reconstructing the bones for display and developed a system to replace lost bones with wood to resemble the other bones. He then drilled long holes in adjacent pieces of bone and used a hidden iron armature to assemble and secure the skeleton for display. The method proved effective since it continues to support the mastodon to this day. This is the mastodon skeleton that Perrin du Lac has illustrated in his plate.