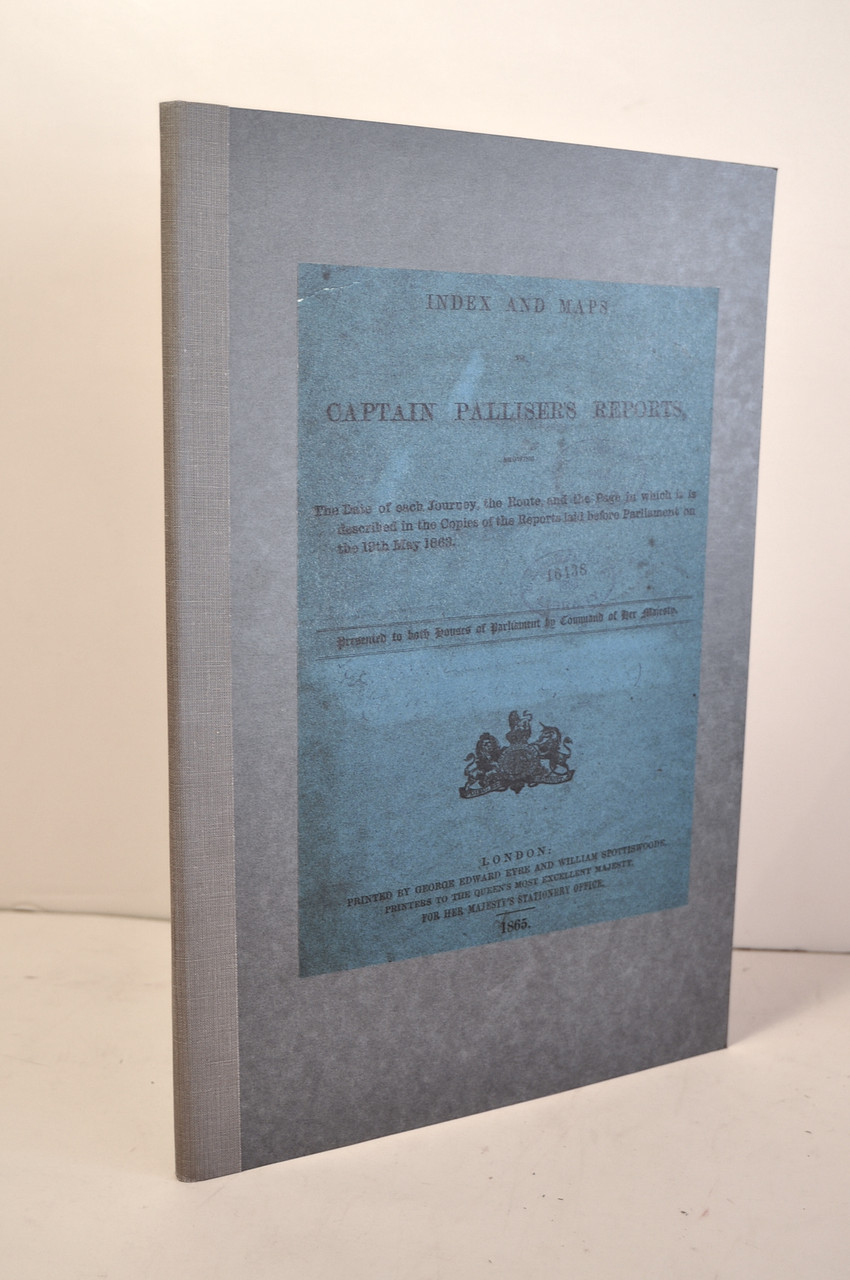 Palisser, John; Index and Maps to Captain Palisser’s Reports…. London, 1865. Printed by George Edward Eyre and William Spottiswoode. Folio, with five folded hand colored maps and profiles by Stanford (including the large "General Map of the routes in British North America, explored by the Expedition under Captain Palliser, during the years, 1857, 1858, 1859, 1860").

The work is complete and in a stiff later archival folder with blue title cover laid on the front board. Original title cover repacked and bound in. The large map has been preserved with archival material along folds with no lose to map, the other maps are clean and in very good condition. Old USGS stamp on original cover. In good condition.

John Palliser (1817 – 1887) was an Irish-born geographer and explorer. He was educated at Tinity College in Dublin and spent several years in the militia. In 1856 Palliser submitted a proposal to the Royal Geographical Society outlining his plan to explore the southern prairies of British North America and adjacent passes through the Canadian Rocky Mountains. The plans were soon revised to include the old North West Company canoe route from Fort William to Red River, and the expedition received official approval and funding. The expedition was officially called the British North American Exploring Expedition, but commonly called the Palliser expedition, explored and surveyed the open prairies and rugged wilderness of western Canada from 1857 to 1860.

The purpose of the expedition was to explore three main areas: the land between Lake Superior and Red River, Red River to the Rocky Mountains and the land beyond the Rocky Mountains towards the Pacific Ocean along the coast. This was the first detailed and scientific survey of the region from Lake Superior to the southern passes of the Rocky Mountains. The expedition gathered scientific information including information on the geology, mineral resources, geography, climate, soils, flora and fauna and to determine the feasibility of constructing a railroad line across Canada. Palisser’s reports and maps provided the first comprehensive, detailed, observations to be published about the southern prairies and Rocky Mountains in what is now Canada. The results were published but the folio atlas was delayed and appeared in 1865 under the title “Index and Maps to Captain Palisser’s Reports".