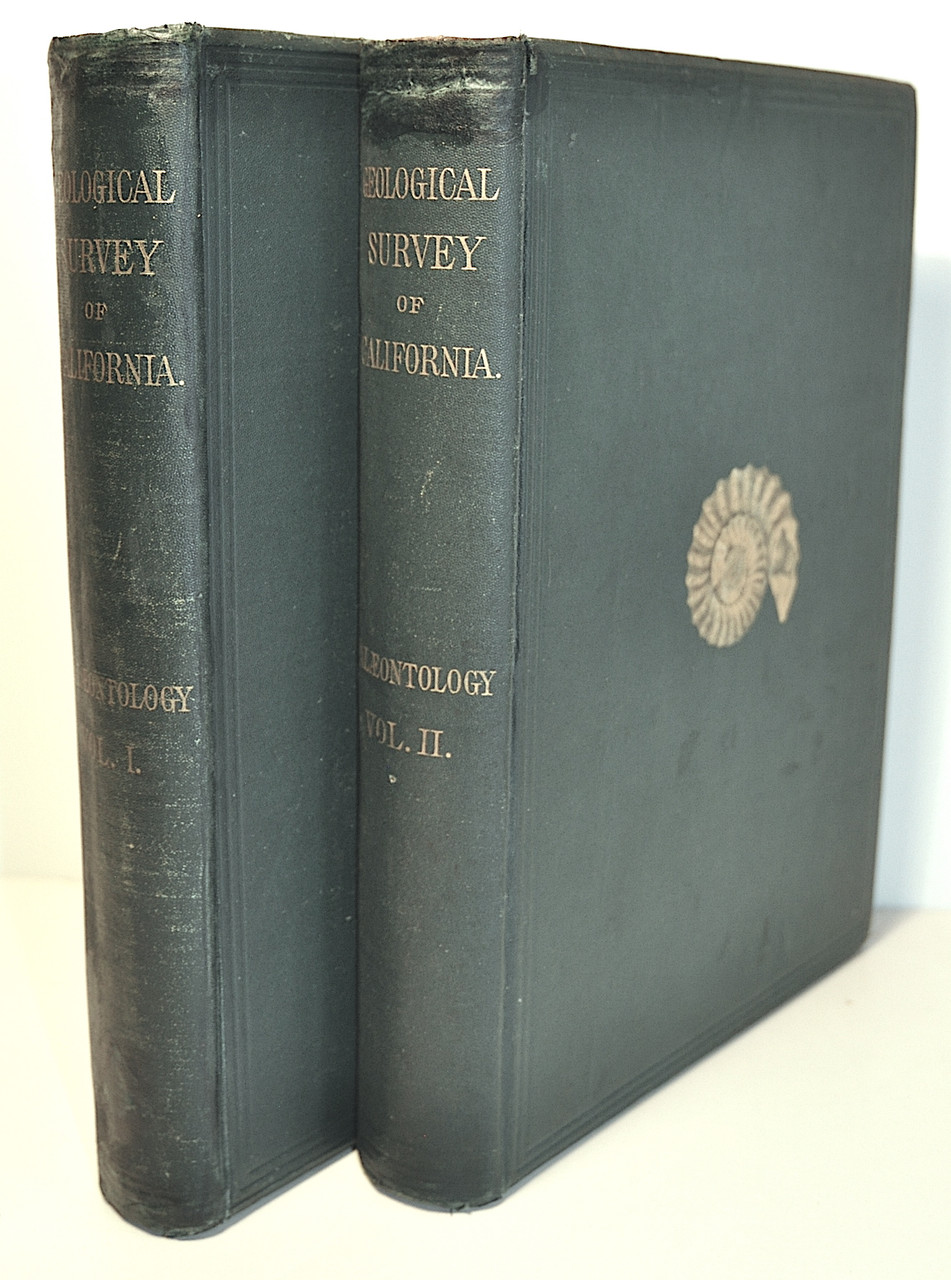 Product Description
Meek, F. B. & Gabb, W. M.; Geological Survey of California. Paleontology, Vols. 1 & 2. Published by Authority of the Legislature of California, Sherman & Co. Philadelphia, 1864-1869. Vol. 1 is Carboniferous and Jurassic Fossils by F. B. Meek & Triassic and Cretaceous Fossils by W. M. Gabb.  Vol. 2 is Cretaceous and Tertiary Fossils by W. M. Gabb. Quarto, vol. 1, xx, 243, 32 plates with descriptive text page. Vol. 2, pp. xiv, 2, 299, 36 plates with descriptive text page.
The set is complete and in the original green cloth with gilt spine titles, gilt cover vignette of fossil and gilt state seal on rear cover. The bindings are tight and clean, minor restoration to spine top edges. Brown end sheets with inner hinge tightened. Text and plates are clean with light foxing to some plates. Private owners book plate on pastedown. In very good condition and rare in complete set.
Fielding B. Meek (1817-1876) was an American invertebrate paleontologist. He was self educated in the sciences. Health problems, including deafness and tuberculosis, were to plague him throughout his life. His first practical scientific experience was gained as an assistant in David Dale Owen's U.S. Geological Survey of Iowa, Wisconsin, and Minnesota in 1848 and 1849. From 1852-1858 Meek was employed at Albany, New York, by the paleontologist James Hall, but not during the summers. The relationship with Hall was a stormy one. The summer of 1853 was spent in the Bad Lands of Nebraska in association with Ferdinand Vandeveer Hayden, while those of 1854 and 1855 were spent with George Clinton Swallow's Geological Survey of Missouri. Meek's association with Hall ended in 1858 when a dispute arose over the discovery of the occurrence of Permian fossils in North America.
Meek joined the staff of the Smithsonian Institution in 1858 as the Institution's first full-time paleontologist. In lieu of salary, the SmithsonianDirector Joseph Henry allotted Meek living quarters within the Smithsonian. Until his death, Meek continued to live in the “ castle", eventually gaining the title of resident collaborator in paleontology. At the Smithsonian Meek also renewed his acquaintance with F. V. Hayden, joining him on many of Hayden's surveys of the western territories. Meek and Hayden's most notable resulting publication was Paleontology of the Upper Missouri (1865). Meek also worked for the Ohio Geological Survey under John Strong Newberry, and with Amos Henry Worthen on the Geological Survey of Illinois. Meek received training in scientific illustration from Frederick Swinton. His work would always contain the most faithful and conscientious research, and eventually raised him to the highest rank as a paleontologist. In addition to his many other endeavors Meek prepared with WM Gabb (1839–1878) two volumes on the “Paleontology of California” (1864–1869) undertaken with J. D. Whitney. Meek died of tuberculosis in his living quarters at the Smithsonian in 1876.
William More Gabb (1839-1878) was also an American invertebrate paleontologist. He also chose to pursue a career in geology and sought the assistance of James Hall in Albany, New York. For a time he became Hall's student and assistant before returning to Philadelphia in 1860. There he became an active member of the Academy of Natural Sciences and then briefly joined a group of young scientists studying at the Smithsonian Institution in Washington D.C. where he became known as an expert in American Cretaceous paleontology. This brought him to the attention of Josiah D. Whitney at the California Geological Survey and in 1862 Gabb was appointed paleontologist to the survey. For the next several years Gabb did extensive work throughout California. In addition to field work, he classified the survey's Cretaceous and Tertiary fossils and documented his findings in the first and second volumes of the Geological Survey of California. After seeing to the publication of the second volume of California Paleontology, Gabb ended his participation in the California survey.

Schindler, A. Hontum; The Turquoise Mines of Nishapur Khorassan. In, Records of the Geological Survey of India, Vol. XVII, Part 2, 1884.