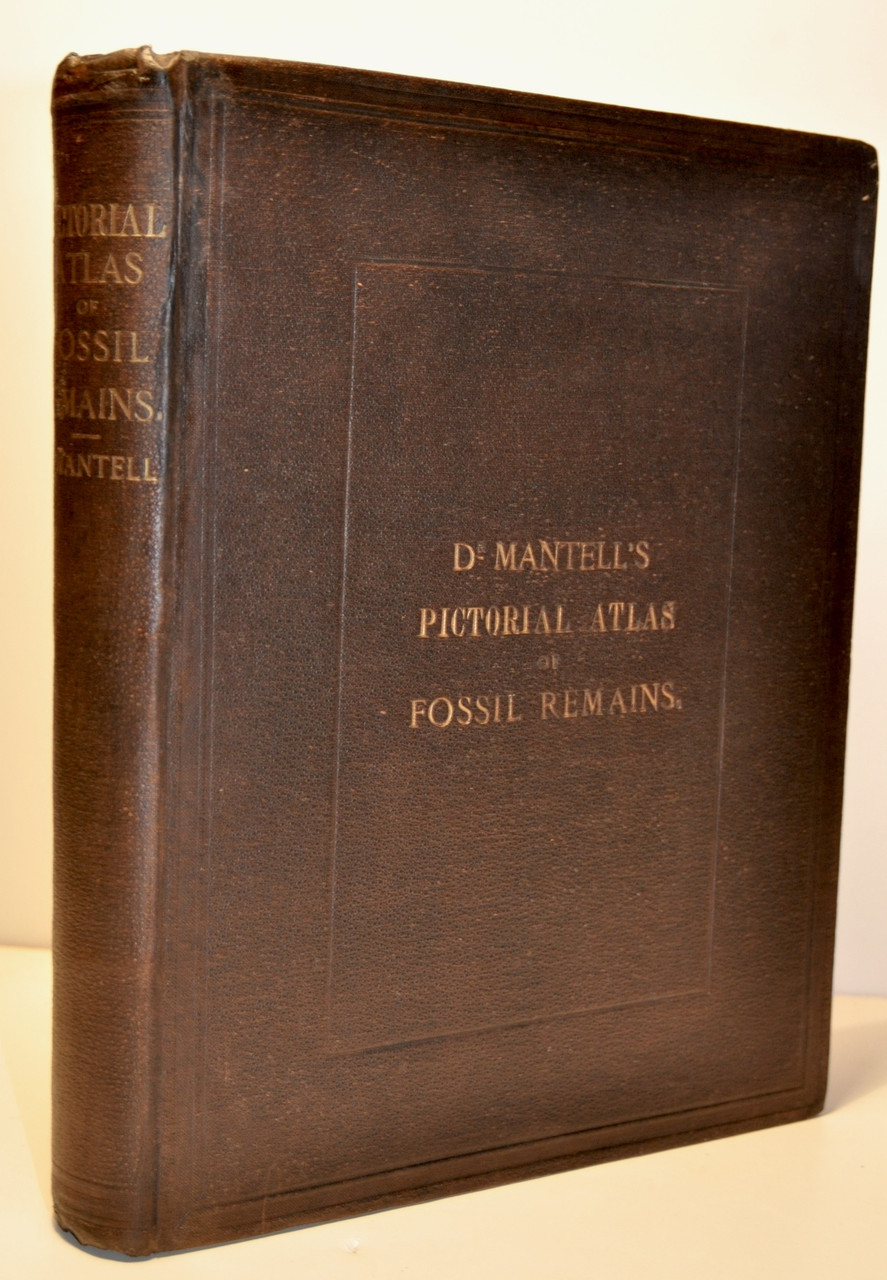 The work is complete and in the original pebbled brown cloth with embossed ruled borders and gilt cover and spine titles. The binding is tight and clean, titles bright, inner front hinge nicely re-enforced, original owner's signature on end sheet, later owner's book plate on front and rear paste down. The text and plates are exceptionally clean. A rare copy of the atlas with only the frontispiece by Mantell's son Walter Mantell of Wellington, NZ, being colored. In very good condition.
Gideon Algernon Mantell, (1790 - 1852) was British physician, and amateur geologist and paleontologist, who is now recognized as the discover of four of the five genera of dinosaurs known during his time. He was born the son of a shoe cobbler and thus was often shunned by those of the higher social class in science. Mantell spent his time studying the paleontology of the Mesozoic strata in his area, particularly in Sussex, a region he made famous in the history of geological research. He demonstrated the freshwater origin of the Wealden series of the Cretaceous, and from these beds he brought to light and described the remarkable dinosaurian reptiles known as Iguanodon, Hylaesaurus, Pelorosaurus and Regnosaurus. The first of these discoveries was the tooth of an Iquanodon. Mantell sent the tooth in the care of his friend Charles Lyell to the famous naturalist George Cuvier in Paris. Cuvier originally misidentified the tooth as belonging to a rhinoceros. Mantell sent further teeth and asked Cuvier to reconsider which he graciously did and declared that it looked to be from a giant iguana. In 1825, Mantell published his paper on the topic, “Notice on the Iguanodon, a Newly Discovered Fossil Reptile, from the Sandstone of Tilgate Forest, in Sussex.” The fossil tooth is now widely recognized as one of the first dinosaur discoveries.
But while Mantell’s discovery was a major breakthrough it came at a time when science itself was in the throes of a battle was being waged between the religious and scientific theories of evolution and science itself. On the religious side stood a group of eminent scientists and chief amongst them was Richard Owen. Owen was a figure of high society, close to the royal family, and he had helped establish the Natural History Museum in London. even thought he had never been an ardent collector of fossils or spent time in the field. His obsession was in trying to prove that these newly discovered fossils were “ God’s monsters” and had nothing to do with evolution. Owen was upset with Mantell’s discovery of an Iquanadon tooth and set out to discredit his work and instead support the work of his aristocratic elite in the conservative, religious side of science. Owen went so far as to use his influence to re-classify the fossils as “God-created beasts” and yet to protect himself, at the same time, Owen coined the name “dinosaur” to describe them. So once Mantell's fossils were conclusively proven to be dinosaurs, it was Owen, not Mantell, who took most of the credit.
Mantell moved to Brighton in 1823, where he opened a museum in his own home and pursued his passion for new fossil discoveries. In 1832 Mantell discovered the first strongly armored group of dinosaurs. He described this fossil, which he named Hylaeosaurus, in his work "The Geology of the South-east of England”. Meanwhile, Buckland in 1824 had described the remains of the large carnivorous dinosaur Megalosaurus from the Jurassic near Oxford. Thus the first three dinosaurs to be known, the Iguanadon, the Megalosaurus, and the Hyaelosaurus, each belonged to a quite distinct group, later called Ornithopoda, Theropoda, and Ankylosauria, respectively. Unfortunately, the expenses of having a museum in his home, nearly drove Mantell to bankruptcy, and he was forced to sell the collection to the British Museum and move to London in 1838. Many of the fossils were initially credited to Owen for displays. Mantell's wife and son also left him and immigrated to New Zealand. In order to continue his pursuit of fossil's Mantell published his Atlas of Fossil Remains. Within it he describes and illustrates fossil invertebrates, vertebrates and plants. While the title page on all the copies printed state coloured illustrations, an unknown number of copies were published with only the frontispiece being colored. This was probably done at the request of the buyer to reduce the cost of the book or because the owner wished to color the plates. We have never seen another copy with b/w plates.
While Richard Owen may have received the initial fame for the dinosaur, history has since proven that it was Gideon Mantell who deserved the credit and thus has the rightful title to the discovery of the first dinosaurs.