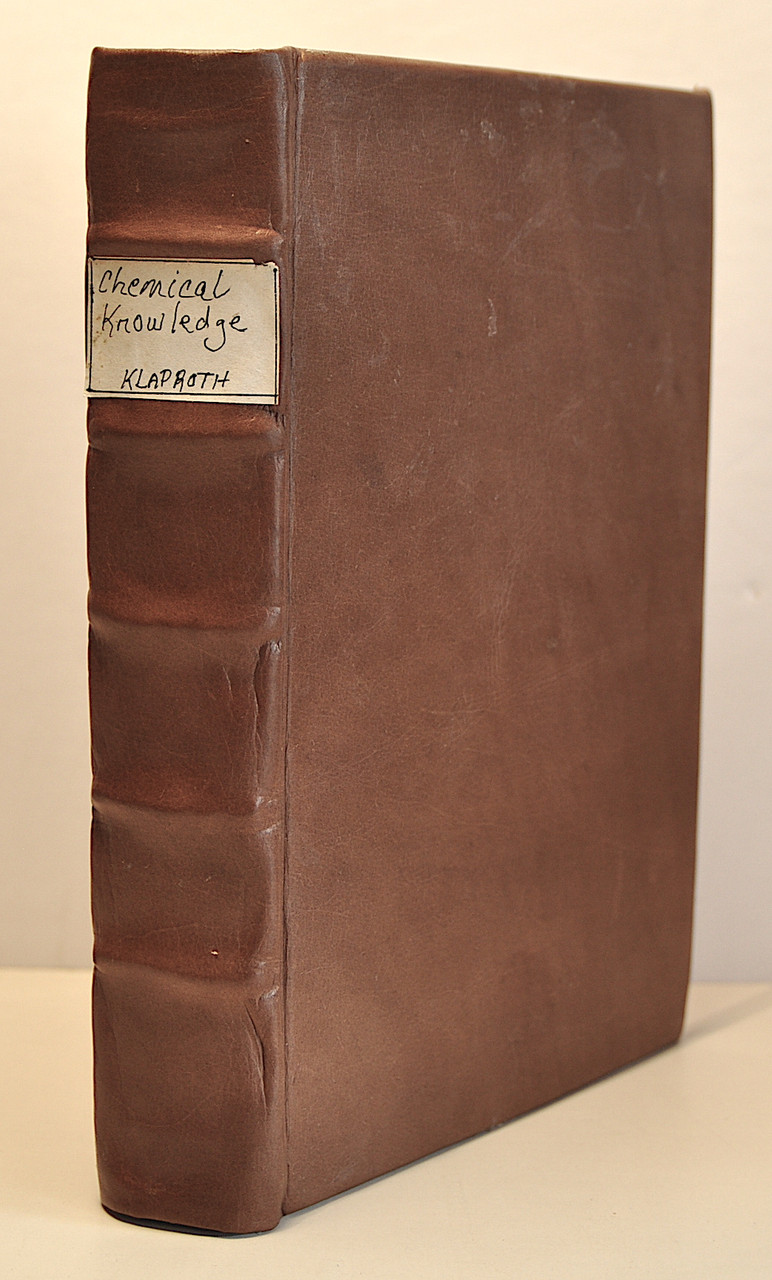 Product Description
Klaproth, Martin Heinrich; Analytical Essays Towards Promoting the Chemical Knowledge of Mineral Substances. Translated from the German, Vol. 1.  Printed For T. Cadell, Jun. And W. Davies, In The Strand By G. Woodfall, No. 22, Paternoster-Row. 1801. Large octavo, pp. xvi, 591.
The volume is complete and in a modern full calf with six spine panels and a penned spine title label. The binding is clean and bright, modern end sheets. Text has some light staining to the upper portion of the title page and the last text page. Blind stamp of the Philadelphia College Pharmacy on lower title margin and small stamp on lower edge of ad page. Over all in good condition. Very rare volume one of this work with a smaller volume two published three years later which is seldom seen and thus even rarer.
Klaproth (1743-1817) was a German chemist and apothecary. After working in two other apothecaries, in 1780 Klaproth purchased his own shop and in 1782 began to advance to higher positions within the Prussian medical board, finally becoming a high councilor in 1799. In addition to these duties, Klaproth held several teaching positions including  professor of chemistry in the University of Berlin's Philosophical Faculty. He soon was recognized as the outstanding analytical chemist of his time and made numerous contributions to our understanding of minerals. He discovered and also co-discovered Zirconium, uranium, titanium, strontium, chromium, and cerium and also reaffirmed the discoveries of tellurium and beryllium. Throughout his life, Klaproth was constantly publishing the results of his analytical research on mineral  species. His research is noted for its thoroughness and accuracy. Klaproth would periodically collect his papers together and publish them in his now famous German work "Beiträge zur chemische Kenntniss der Mineralkörper." In 1801 the English translation of the first volume and part of the second volume was printed. The translation must have been issued in a limited printing since it is quite rare. A second volume was printed in 1804 which would have completed the translation of volume two of the German edition. No further volumes were translated.