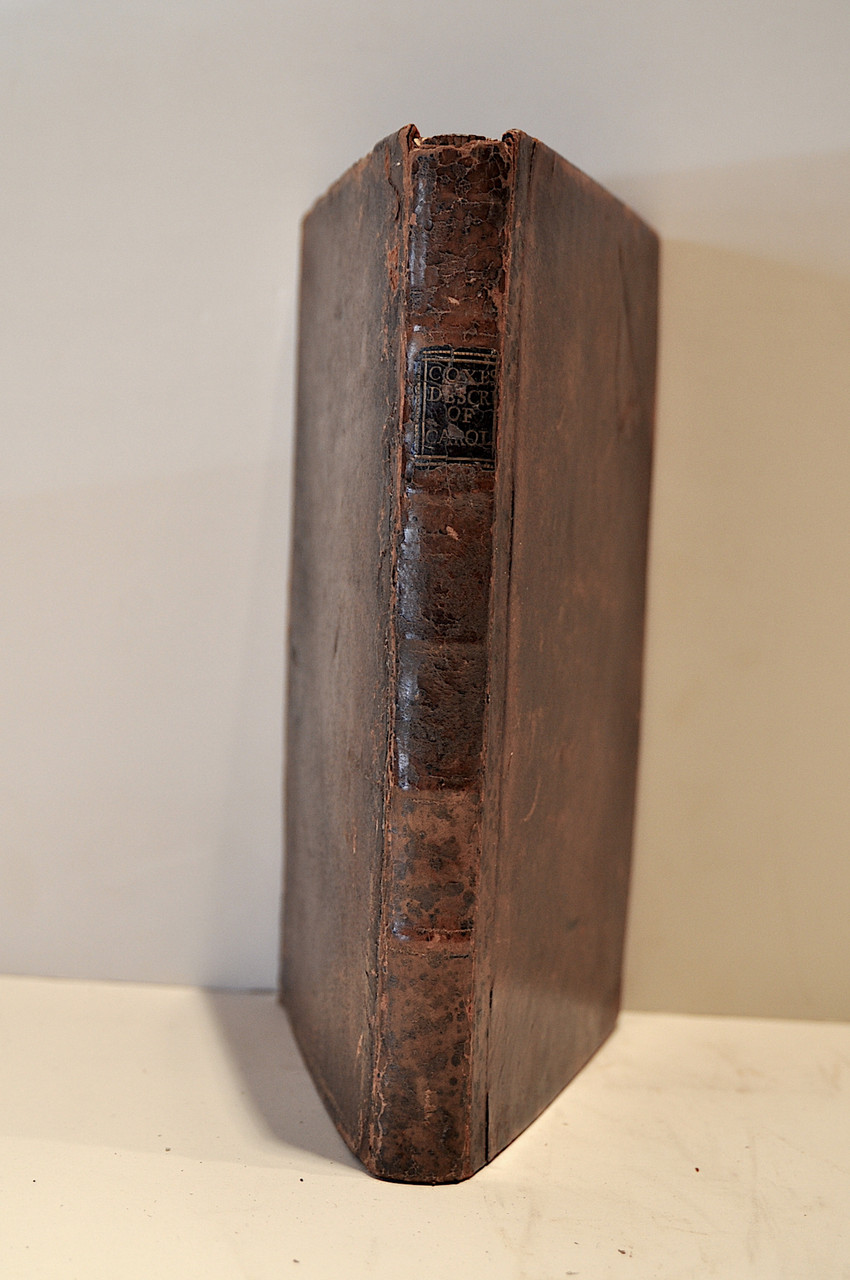 Product Description
Coxe, Daniel; A Description of the English Province of Carolana. By the Spaniards call'd Florida, and by the French, La Louisiane….... London Printed for & sold by Olive Payne, 1741. Quarto, pp. 54, 122, Large folding map 22" x 17”. Map is titled "A Map of Carolana and o the River Meschacebe." [Mississippi]
The work is complete with the rare map present. Bound in contemporary full calf with raised bands and gilt spine title. Boards are scuffed and worn. Contemporary early signature of ownership on first leaf. Map is in very good condition with early re-enforcement at folds, text is crisp and clean. In very good condition.
The 1st ed. of this work appeared in 1722.  This later edition is in fact a re-issue of the unsold sheets of the first edition with new updated title page inserted. The work is one of the first English works to describe the Southeast in any detail, its geography, minerals and mineral resources, as well as the other natural resources and peoples. The map is one of the very few maps that have "Carolana" on them, referring to the western territory adjacent to the colony of "Carolina." The map is probably based on DeLisle's 1722 map, which in turn was based on his 1703 map. The text is a compilation from various journals to impress the English public with the great importance of the region described.In addition to the Carolinas the name `Carolana' covered the present State of Georgia, the Floridas, Alabama, Mississippi, and Louisiana and the entire region was claimed by Doctor Daniel Coxe, the father of the author, as proprietor under grants from the Crown by King Charles II. His son published the present work to further his families claims, but also to raise awareness of the huge potential of the area and the dangers posed by French incursions.The author explored a great part of it, and lived there for fourteen years. Coxe wished to colonize the banks of the Mississippi near its mouth, in spite of the French claim to the territory. The Preface is the first printed proposal for a political confederation of all the British North American Colonies, leading up to a Governor General to be appointed by the Crown. The work is a major part of the history of the southern United States.