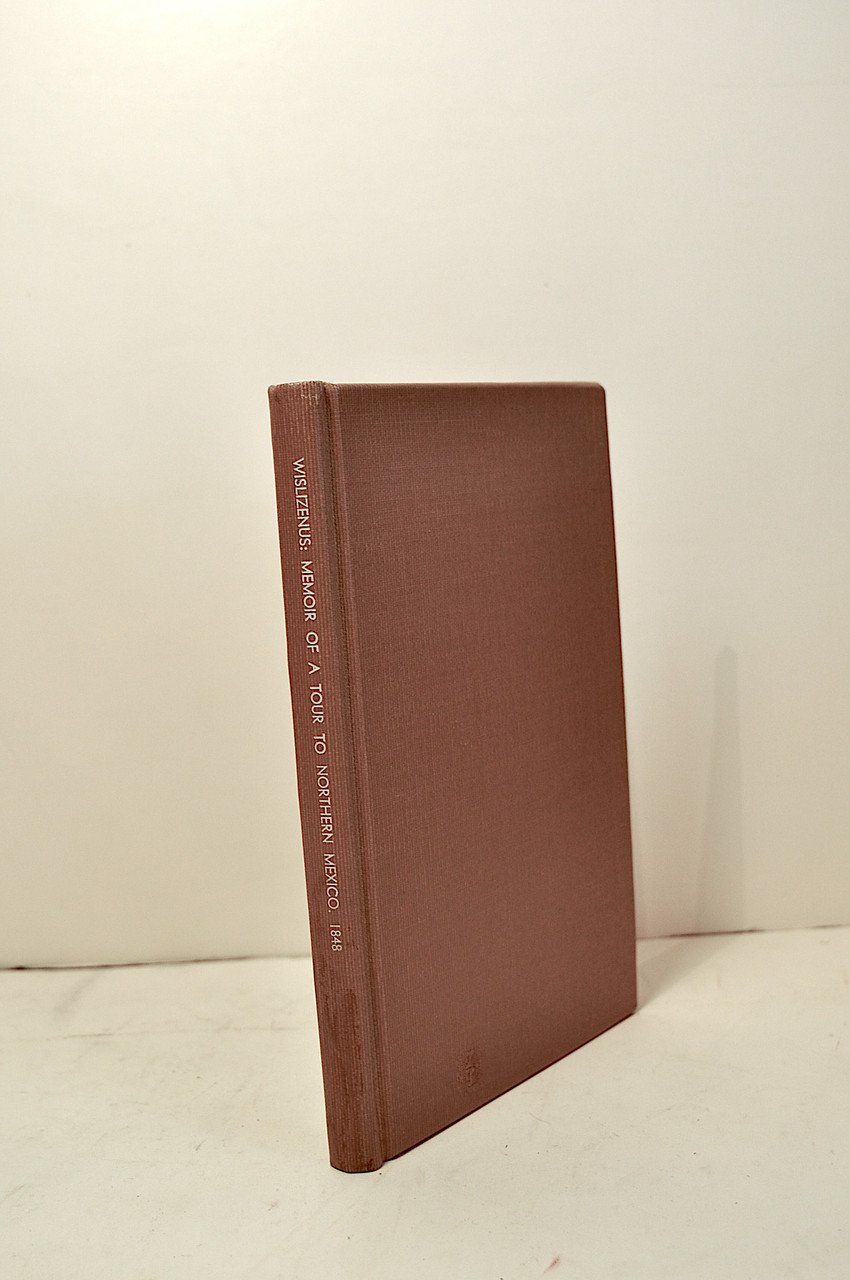 Product Description
Wislizenus, Frederick; Memoir of a Tour to Northern Mexico, Connected with Col. Doniphan's Expedition, in 1846 and 1847. Washington: Tippin & Streeper, Printers. 30th Congress, 1st Session, Miscellaneous no. 26, 1848. Octavo, pp. 141, 2 fine folding lithographed maps, and folding profile of the route from Independence to Chihuahua via Santa Fe and El Paso.
The work is complete and in a modern leatherette with white spine titles. The binding is tight and clean, small faint embossed stamp on lower inner corner of front board, old call number and discard stamp on upper inner corner of title page. Text is clean one map and profile are clean and bright, large folded map has had archival tape repairs to verso, no lose of image. Over all in very good condition.
Friedrich Adolph Wislizenus (1810-1889) was a German-born American medical doctor, explorer and botanist. He is best known for his printed recollections from travels to Northern Mexico and today's state of New Mexico. Wislizenus immigrated to America in 1824 and initially settled in Illinois but moved to St. Louis, Missouri seeking better employment opportunities. There he found work accompanying one of the expeditions of the Rocky Mountain Fur Company which was traveling to the far west seeking the source of the Green River in the Wind River Mountains. Upon returning to St. Louis he practiced medicine but a new opportunity for further exploration was offered. In 1846 he joined a merchant expedition to Santa Fe. His intention was "to gather information on the geography, geology and natural history of northern Mexico and California." Shortly after he started down the Santa Fe Trail in May, however, war broke out between the United States and Mexico but Wislizenus persisted and accompanied a caravan of wagons belonging to trader Albert Speyer, who was transporting two wagonloads of arms and ammunition ordered by the governor of Chihuahua. At Santa Fe, Wislizenus obtained a safe-conduct pass from the New Mexican governor and then traveled south along the Chihuahua Trail, passing through El Paso del Norte and arriving in the city of Chihuahua on 24 August. But the expedition was imprisoned and spent several months in a secluded mountain village. Wislizenus used this time to put together all his notes, and prepare his maps. Finally the prisoners were freed by Colonel Doniphan in the spring of 1847 and that same year Wislizenus returned to St. Louis. Due to the effort of senator Thomas H. Benton, with whom he became acquainted with, he was summoned to Washington, D.C. and requested to publish his recollections. "Memoir of a Tour to Northern Mexico in 1846 and 1847"  corrected erroneous views upon the western country and provided in depth descriptions (with maps and sketches) of the lands near the Rio Grande. The Senate ordered printing of 5,000 copies for distribution. The first map ( called the journey map) was of considerable value in showing a number of routes to New Mexico and across Texas and Doniphan's campaign is carefully followed from Independence, through New and Old Mexico to the camp of June 2nd, 1847 near the mouth of the Rio Grande.