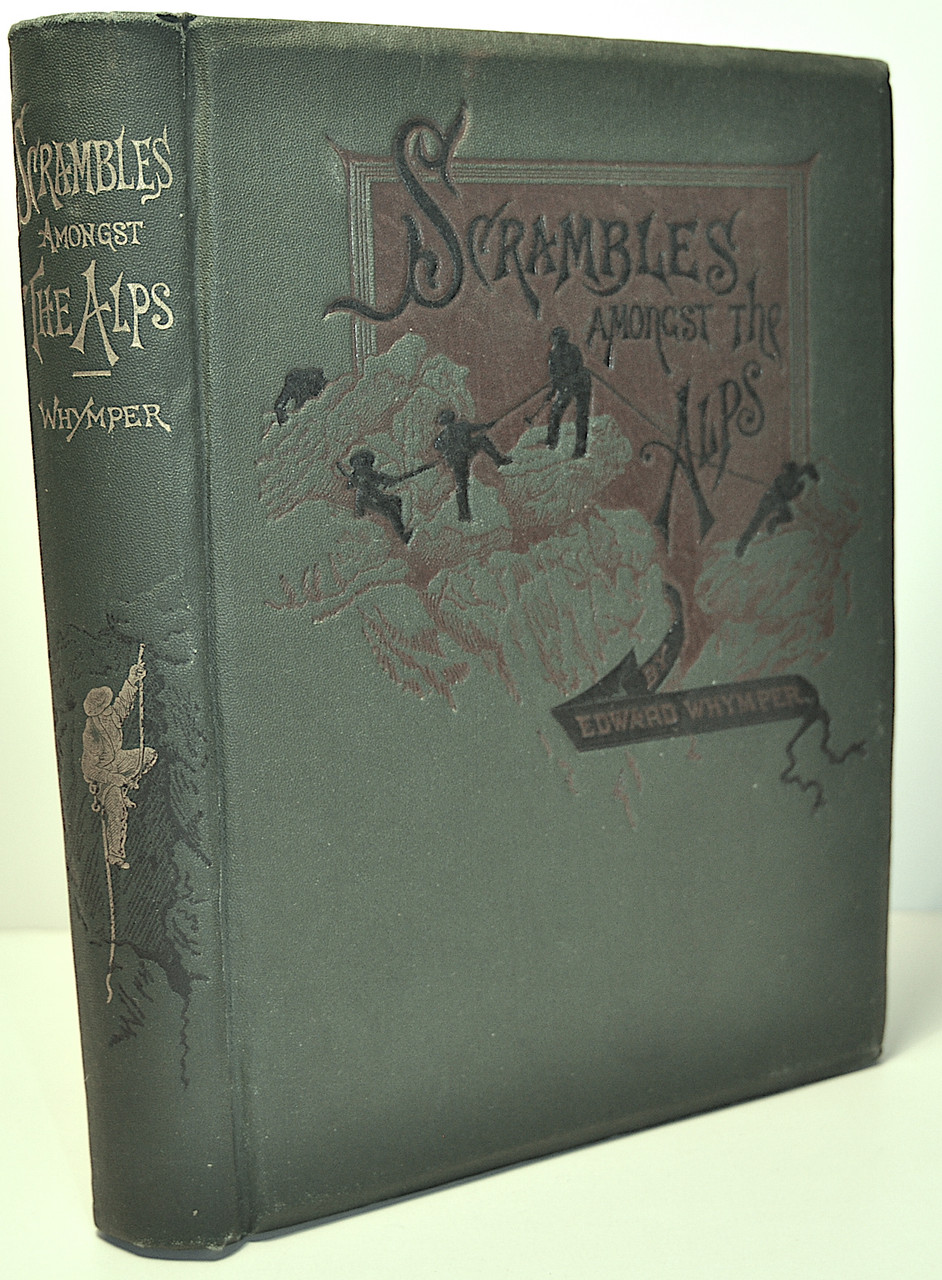 The work is complete and presumed to be the first US printing, published in 1880 without the 1890 printing which contained the map. The 1880 printing is in the original dark green cloth with embossed cover vignette in red and black with black titles and gilt spine titles and spine vignette, bevelled edges to boards and gilt text block edges with decorative end sheets. The binding is tight and clean with minor scuffing to board edges, previous owner’s private book plates or stamp on end sheet. The text, plates, and woodcuts are clean and bright. In very good condition.
The Whymper narrative was originally published in London in 1871 and went through numerous printings before being published in America circa 1880 without a map which was added to later printings. The 1880 printing is the first time the Lady Murphy work appeared and her work was apparently never printed as a stand alone work.
Edward Whymper FRSE, (1840-1911) was a famous English mountaineer, explorer, illustrator and author. He is best remembered for the first successful ascent of the Matterhorn in 1865. Four members of the climbing group were killed on the descent from the peak. Whymper also made successful ascents on Mont Blanc and in the Pennine Alps, Chimborazo in South America and the Canadian Rockies. His explorations in Greenland led to important advances in Arctic exploration. Trained as a wood engraver at an early age, Whymper’s illustrations are found throughout his work. First published in 1871, Scrambles Amongst the Alps is Whymper's own story of his nine years spent climbing in the Alps. The book is also one of the first to be devoted to the challenges of mountaineering, and is considered by many to be the best and most authoritative mountain travel book of the period. Whymper's first successful ascent of the Matterhorn in 1865, on his eighth attempt, is described here and remains the classic mountain story of triumph and tragedy. The book’s success led to it being a classic of mountaineering and thus went through many editions.
The American editions include Lady Blanche Murphy’s (1845-1881) work “Down the Rhine”. Lady Blanche Murphy was born in England to aristocrats and died in America in New Hampshire. She was an author and journalist in America and gained the attention of the world when she defied the Victorian era tradition of marriage by marrying someone; Thomas Murphy, considered to be a commoner by society and below her aristocratic social level. Queen Victoria was her god mother. Thomas Murphy was an organist who also gave private singing lessons to Lady Blanche. The couple sailed to America and finally settled first in New York City and then in New Hampshire where she held positions in journalism and in writing articles for magazines and books while her husband secured positions teaching music. She died after a brief illness in 1881. Lady Blanche was also active in early movements for women’s rights and the right to vote.