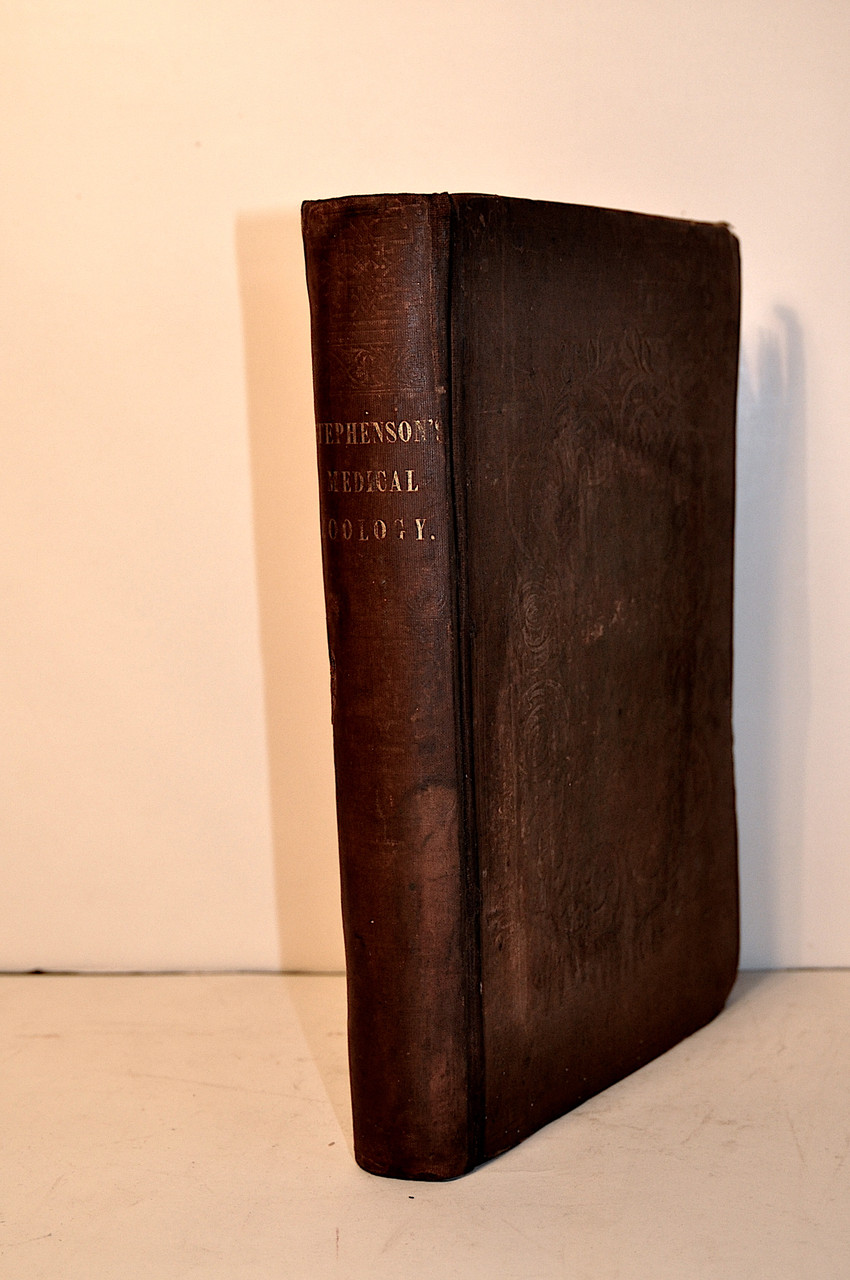 Product Description
Stephenson, John; Medical Zoology, And Mineralogy;  Or |Illustrations And Descriptions Of The Animals And Minerals Employed In Medicine, And Of The Preparations Derived From Them: Including Also  An Account of Animal and Mineral Poisons: With Figures Coloured From Nature. London: John Churchill, Princes Street, Soho. 1838. Quarto, pp. vi, 350, 46 plates (44 hand colored).
The work is complete and in the original embossed cloth boards, recessed with the original spine with gilt titles preserved. Scuffing and light soiling to the binding, light foxing to margins of first and last pages, rear end sheet and pastedown lightly stained. Plates and text are clean. In good condition.

Stephenson, (1790-1864) was an English physician, pharmacist and naturalist. He wrote works on the medical properties of plants, animal and minerals. His work Medical Zoology was originally published in 1836 and in 1838. The 1838 edition had two more colored plates. Some copies of the 1838 edition may have been issued with a frontispiece and 45 plates but we have never located such a copy. Everyone we have located had 46 plates within the text. Medical Zoology is a relatively unknown colored mineralogy. The text describes and illustrates various animals and minerals recognized in the medical science of the nineteenth century. Included are descriptions of many vemonous creatures and minerals from which medical preparations were derived. The illustrations that accompany the text appear to be original and not copied from some other work. The plates are identical in both the first and second editions. Only a few are signed C. Spratt del, printed G.E. Madeley, Nov. 1, 1831. The subjects covered on the first 30 plates include venomous animals, fish, insects, snakes, scorpions, fish, squids, centipeds, spiders, etc. Plates 31 to 45 render mineralogical subjects including gold, silver, bismuth, copper, chalcopyrite, malachite, azurite, sphalerite, smithsonite, galena, minium, cerussite, pyromorphite, pyrite, magnetite, pharmacosiderite, mercury, cinnabar, sulphur, amber, barite, calcite, etc.

Trimmer, Joshua; Practical Mineralogy and Geology: With Instructions for the Qualitative Analysis of Minerals. 1842