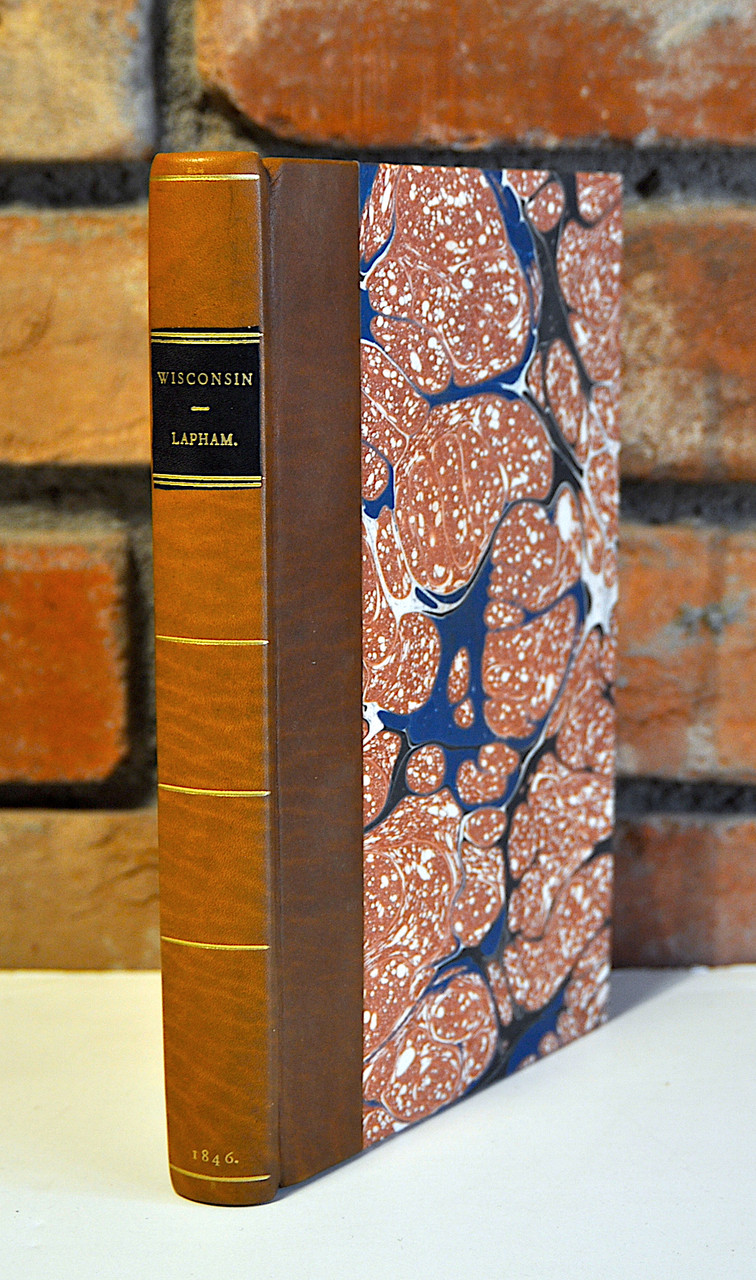 The work is complete and in a later brown calf over marbled boards with gilt ruled spine panels and spine titles. The binding is tight and clean, the folded map is bright and clean, light foxing to text. In very good condition.
Lapham (1811-1875) was a self-educated engineer, geologist and naturalist. He was born in Palmyra, New York and at the age of 13 became a laborer on the canal construction crews in New York. His talent for drafting sketches of canal workings soon led to his becoming  an engineer and surveyor for canals being built not only in New York but also Ohio and Kentucky. His talents brought him to the attention of Byron Kilbourn who was developing plans for not only canals to serve the growth of Milwaukee but also new streets to promote the city’s growth.  Lapham moved to Milwaukee where he was to remain for the rest of his life. The plan for canals was abandoned in favor of railroads and Lapham turned his attention to the study of Wisconsin’s geology, mineralogy, archeology and other sciences. His wealth of knowledge was to help Milwaukee grow from a village to a major city over twenty years. He was to draw the basic plat of the city and was instrumental in the establishment of the public high school program. During this period he was found the time to publish works on Wisconsin and to correspond with prominent scientists in the United States. He also consulted with mining companies in Upper Michigan, Wisconsin and Illinois and provided needed information on geological and mineralogical surveys.
He was a prolific writer and his 1836 list of plants and shells found in the vicinity of Milwaukee was the first scientific imprint published in the Territory of Wisconsin. His "Wisconsin: Its Geography And Topography, History, Geology, and Mineralogy” was first published in 1844 and is the first bound book printed in Milwaukee. The work was improved and expanded for the 1846 printing. Lapham provides the first comprehensive details on the geography, geology, mineralogy, archeology and natural resources of each part of the state.
After Lapham's death from a heart attack in September 1875, his huge natural history collection, including fossils, minerals, shells, meteorites, Indian relics and a large herbarium, was acquired by the Legislature for the University of Wisconsin.