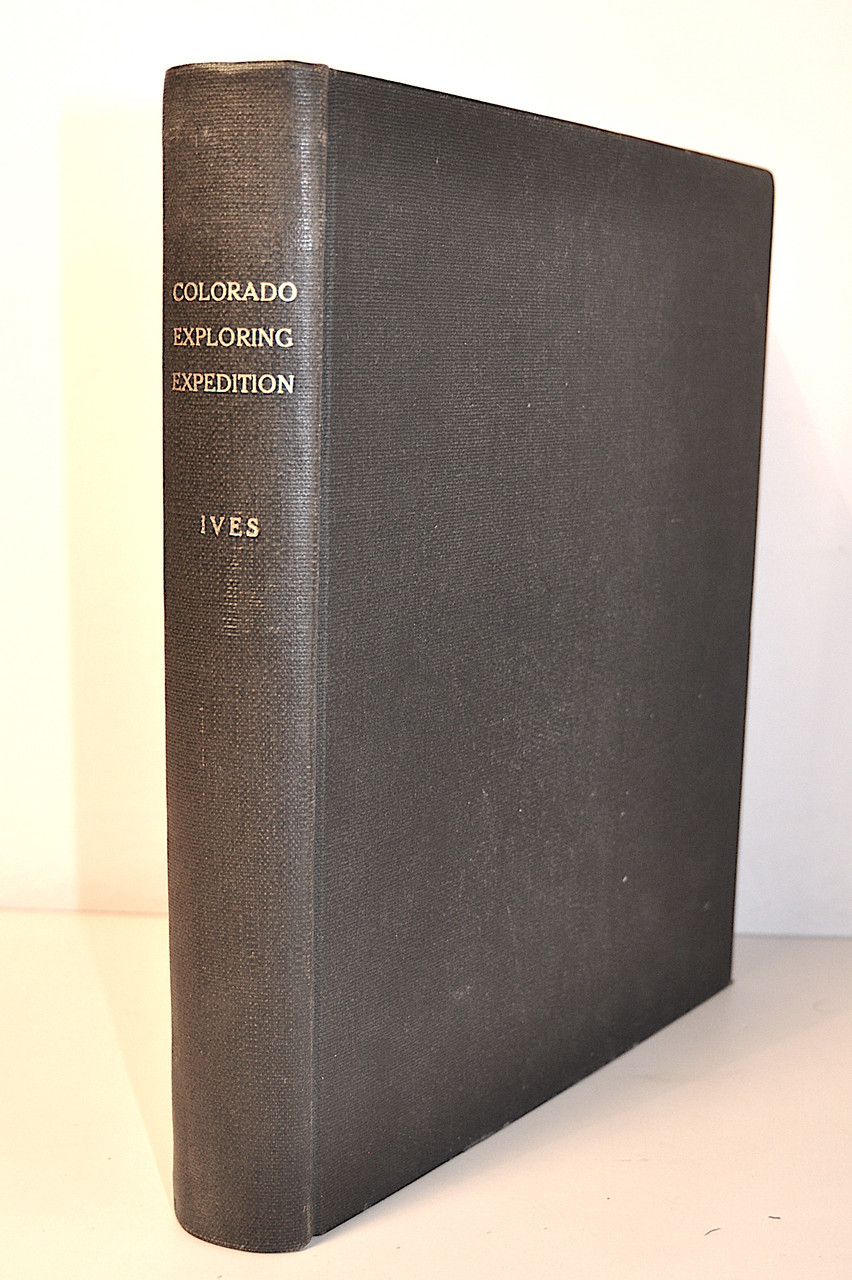 Product Description
Ives, Joseph C.; Report Upon the Colorado River of the West; under the direction of the office of explorations and surveys, A. A Humphreys, Captain Topographical engineers, in charge by order of the Secretary of War. Senate Ex. Doc. 36th Congress, 1st Session. Published by Gov't printing office, Washington, 1861. Large quarto, five parts in one volume, pp. 131, frontispiece, 2 large folded maps, profile, 8 panoramic views, 11 plates, 7 colored plates of Indian portraits, 41 text wood cuts. pp. 14. pp. 154, 3 plates views, 3 plates of fossils, 27 text woodcuts. ( 2 folded color washed geological maps were issued in very few copies. They were not issued in this copy but are provided in an excellent facsimile. pp. 30. pp. 6. pp. 32.
The work is complete and in a later library cloth with gilt titles. The binding is tight and clean. The text, maps and plates are clean with light spotting to some plate margins. Library book plate on paste down and small blind stamp at lower outer margin of each section. Maps and plates are free of stamps. In very good condition.
Joseph Christmas Ives (1828-1868), is best remembered for two accomplishments. He was the engineer and architect of the Washington Monument (1859-1860) and led the successful expedition up the Colorado River. Ives's expedition included the prominent paleontologist and naturalist John Strong Newberry, Heinrich Balduin Möllhausen as artist and diarist, and F. W. Egloffstein as topographer. Ives purchased a steamboat in Philadelphia. The vessel was taken apart and shipped via the Isthmus of Panama to California and thence to the mouth of the Colorado River, where Ives and the members of his expedition rendezvoused late in 1857. Ives and his men reassembled the steamboat and christened it the Explorer.The results were published in this work which includes separately numbered parts: Geological Report. By Dr. John Strong Newberry; Botany. By Professors Asa Gray, John Torrey [et al.]; Zoology. By Professor Spencer Fullerton Baird; and Appendices. John Strong Newberry, who was the naturalist on Ives' expedition up the Colorado River, wrote Part III of this Report, which deals with the Geology and Paleontology of the regions they explored. Ives' party were among the first white men to visit the floor of the Grand Canyon, and upon their return, it was Newberry who realized the canyon's geological significance and encouraged further exploration.