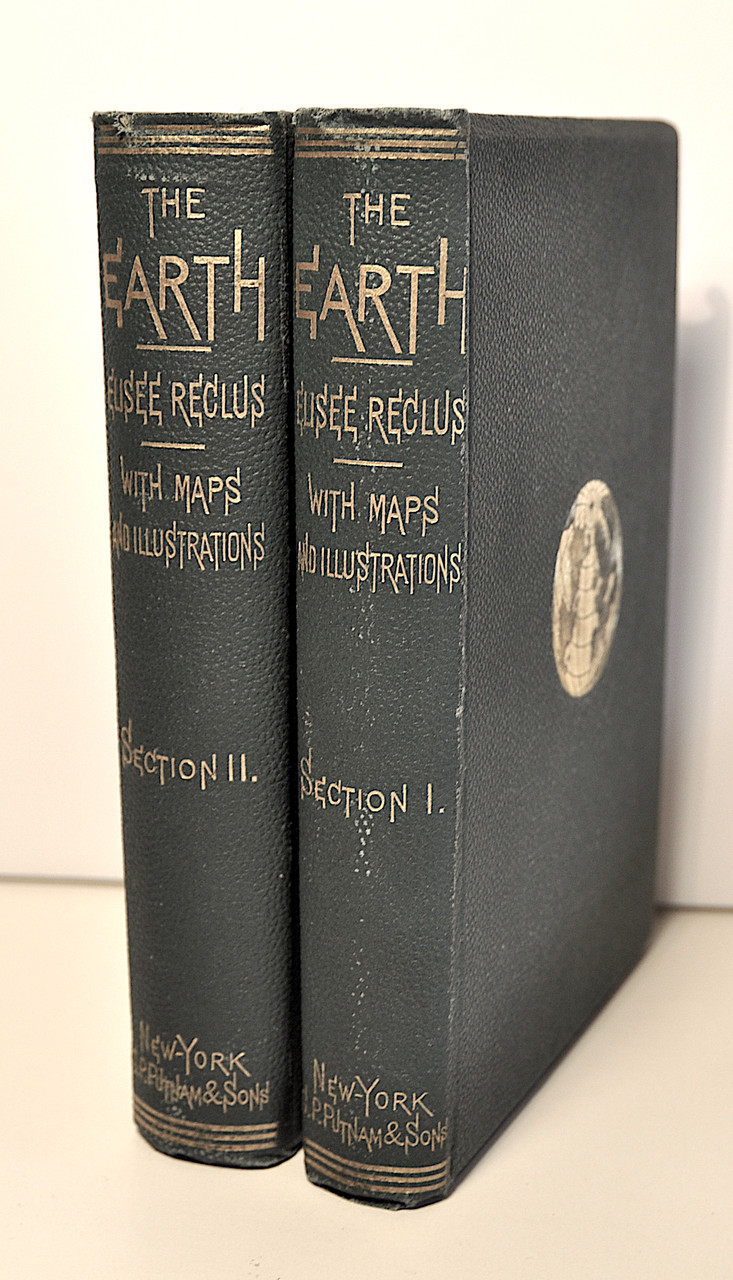 Product Description
Reclus, Jacques Élisée;  The Earth: a Descriptive History of the Phenomena of the Life of the Globe ... Translated by ... B. B. Woodward and edited by H. Woodward ... Illustrated, etc. Parts 1 and 2, Continents. New York, G. P. Putnam & Sons, London, Chapman & Hall, 1871. Octavo, Part 1, pp. xii, 2, 288, colored frontispiece map, 24 additional colored and b/w maps, plates, 234 text figures total in both volumes. Part 2, pp. 289-666.
The set is complete and in the original green pebbled cloth with gilt cover vignette and gilt spine titles, bevelled edges to boards, gilt top to text block, brown end sheets. Very minor wear to boards, bindings are tight, text, maps, plates and figures very clean and bright. In very good condition.
Jacques Reclus (1830-1905) was a famous French geographer, writer and political activist. His best known work was the massive 19 volume masterpiece “La Nouvelle Geographie Universelle”. In 1892 he was awarded the Gold Medal of the Paris Geographical Society for this work, despite having been banished from France because he was labelled an anarchist.
Reclus was educated at Montaubanand and studied geography under Carl Ritter in Berlin. When Napoleon III carried out his political coup in 1851 when he was facing arrest for supporting the Republican government, Reclus was forced to flee France. Along with his brother, Reclus first went to England and then to America to work as a private teacher on a plantation near New Orleans. It was here that he witnessed the horrors of slavery.
In 1858 he was able to return to Paris where he once again took up geography and writing. Reclus remained active in progressive politics, joined the Anarchist Movement, and during the German siege of Paris in 1871 he was taken prisoner while defending the local commune. His sentence of exile from France for life was commuted in early 1872 to one of 10 years banishment. It was then that he settled in Clarens, Switzerland. It was during this period that he began writing his monumental work. Throughout this period he still defended libertarian and progressive ideals. The themes of freedom of conscience and fraternity and especially morality in both the scientific and political arenas can be found throughout his work. Yet Reclus has been all but forgotten in the circles of scholarly geography. This is because he was considered an embarrassment to many within the university world.
His work “The Earth” was published originally in French prior to his massive 19 volume Universal Geography work. After the second French edition the work was translated to English by B. B. Woodward, the Queen’s Librarian at Windsor Castle. After Woodward’s death the translation was edited and finished by his brother. The first two volumes pertain to the geography and geological processes on the continents are offered. The sections cover: the earth as a planet, the surface features, the water and its flow and erosional processes, and finally subterranean processes including springs, volcanism, mountain building etc.