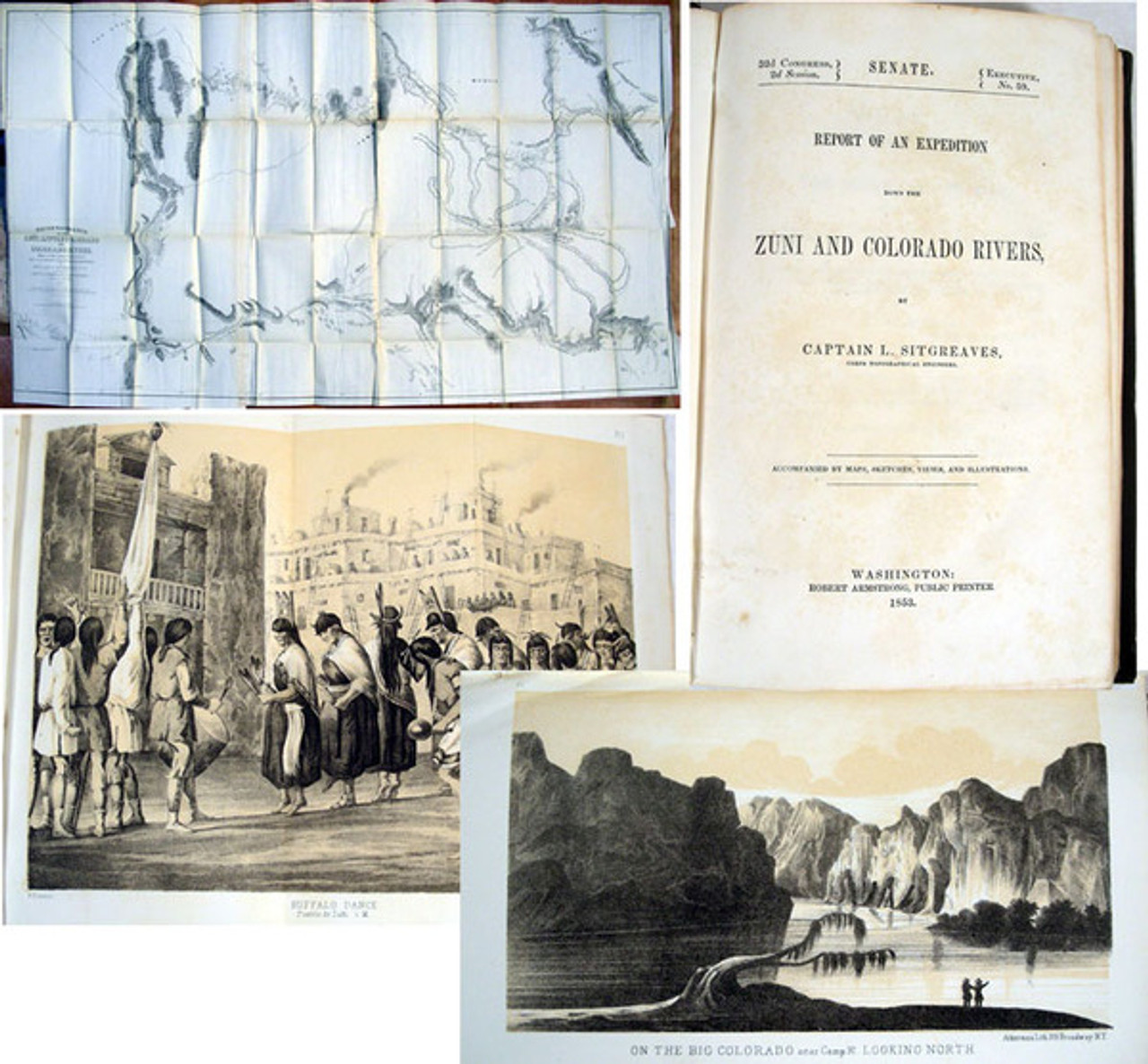 Sitgreaves, Lorenzo; Report of an Expedition down the Zuni and Colorado Rivers. Washington, 32nd Congress, 2nd Session, Senate Doc. 59, 1853. Quarto, pp. 31, 198, 78 plates being 24 plates of Indians (one mis-numbered) & views (Many tinted and as usual #14 mis-numbered), 6 plates of mammals, 5 of 6 plates of birds (as usual #2 not issued in pagination, 19 plates of reptiles, 3 plates of fish, 21 botanical plates; large folded map titled "Reconnaissance of the Zuni, Little Colorado and Colorado Rivers".

The work is complete and in the original brown cloth with gilt spine titles. The binding is tight and clean, light foxing to end sheets, light foxing to some plate margins, the map is very clean, In very good condition.

Sitgreaves led the last of the surveys of Topographical Engineers, brought about by the Mexican War. This covered the territory between the Zuni Pueblo to the Colorado River. Assisted by Parke of the Topographic Engineers, Woodhouse; a physician and naturalist, and Kern as draughtsman, a 198 page report was completed and added to with the numerous plates. The map is considered by Wheat to be a very detailed and well done addition to our knowledge of the west. Sitgreaves and his party traversed the country from northern New Mexico to San Diego in the summer and fall of 1851, crossing northern Arizona and descending the Colorado to Yuma before crossing the desert. The route commences at the Mesa de los Lobos, follows the Zuni to the Little Colorado River, follows that to the San Francisco Peaks (one which now bears Sitgreaves name), thence to the Yampay Creek and to the Colorado River, near the border of California. The Santa Fe Railroad now follows the course of the party with small exceptions. Sitgreaves also shows the route taken by Emory from Fort Webster (copper and gold mines) to the Colorado River. In addition to the important map, the report is notable for its many lithographed plates of scenes along the route, as well as flora and fauna.