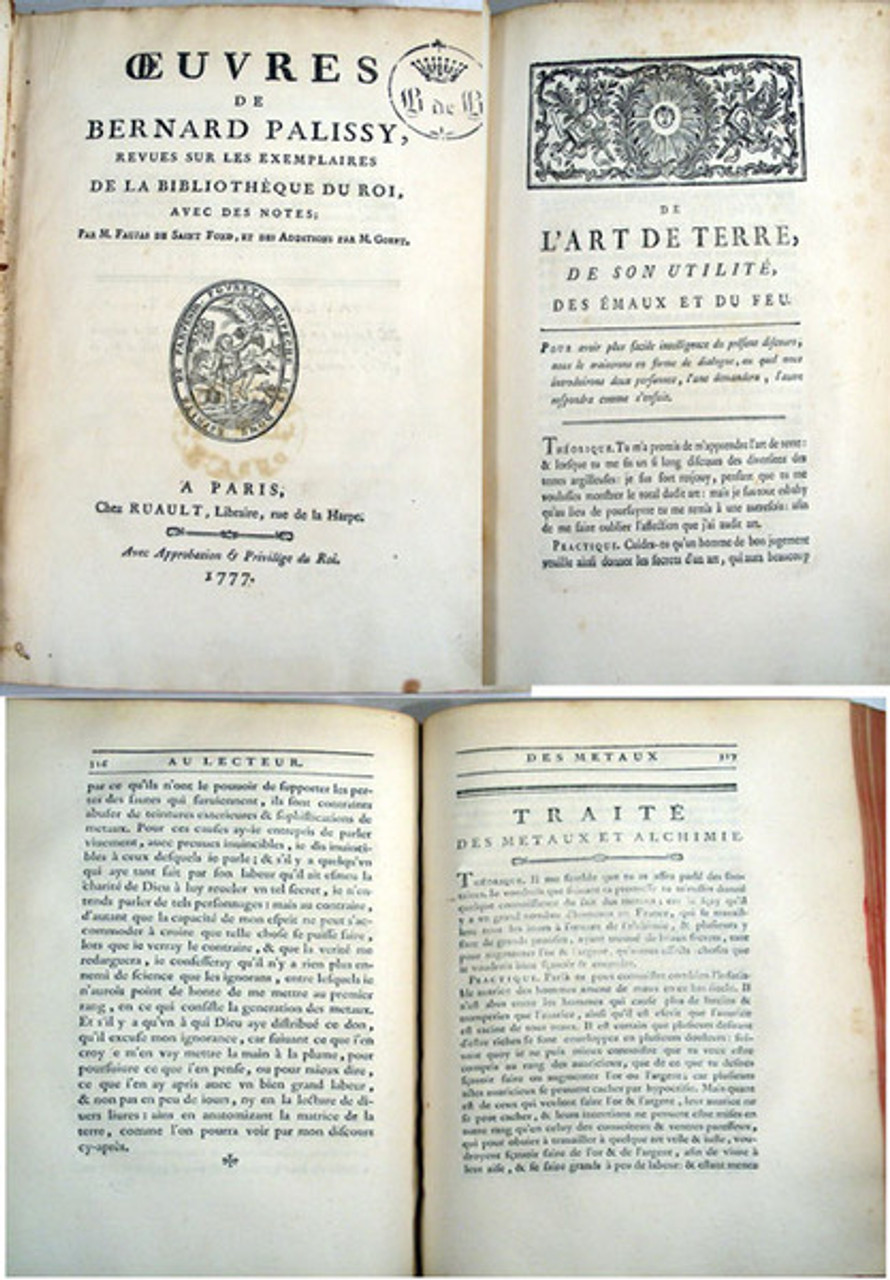 In re-cased contemporary calf, gilt spine label. corners and boards rubbed and worn, inner hinges re-enforced, light foxing to some text margins, rubber stamp on title page and verso of title page and last text page edge. Per usual with this work, our copy lacks the portrait of Benjamin Franklin and dedication. Both were removed by the editor prior to printing and are not present in copies of the work. In very good condition.

The above work is a collection of the writingss of the noted French scientist Bernard Palissy (1510-1589). The writings were compiled and published by the French ceramist, mineralogist and geologist; Faujas de Saint-Fond (1741-1819) who was the first Professor of Geology at the Museum of Natural History, Paris and also Commissioner of Mines. Faujas de Saint-Fond was the first scientist to conclusively prove the volcanic origins of basalt. He traveled extensively and always recorded his observations which were published in well received works. He also completed and published translations of what he considered to be the important writings of prominent scientists and due to his efforts the writings of Palissy have been preserved.
Palissy was imprisoned and died for promoting ideas considered contrary to accepted theological teachings. Palissy recognized the cycle of evaporation and rainfall, the connection of rainfall to the formation and recharge of springs, the stratified nature of the earth's crust, the organic nature of fossils, that fossils were once living species and that many fossil forms were different from modern species, the processes of erosion, and considered the burning of materials within rocks as the cause of earthquakes and mountain building. He also proposed the design of what we consider an "auger" as a method to explore and determine the consistency and types of unconsolidated sediments. Palissy's ideas were well in advance of his time. He was one of the few scientists of his century to have a correct notion of the origins of rivers and streams. An early advocate of the infiltration theory, he refuted the old theories that streams came from seawater or from air that had condensed into water. He also wrote on the principles of artesian wells, the recharging of wells from nearby rivers and forestation for the prevention of soil erosion. He discusses fossils. He believed fossils were remnants of animals and plants and firmly rejected the idea that they were detritus of the biblical flood. He recognized the relation between these fossils and living species and, in some cases, extinct ones. From experimentation Palissy concluded that all minerals with geometric crystal forms must have crystallized in water.
Upon being imprisoned his writings disappeared from his home and his books were seized. His numerous contributions to the geological sciences went unrecognized until Faujas de Saint-Fond gathered together his writings and published them in the above 1777 work. These include his writings on alchemy, agriculture, geology, botany, ceramics, embalming, engineering, hydrology, medicine, metallurgy, meteorology, mineralogy, paleontology, philosophy, physics, toxicology and zoology.